This compromise still needs to find 5 Republicans willing to vote for it. 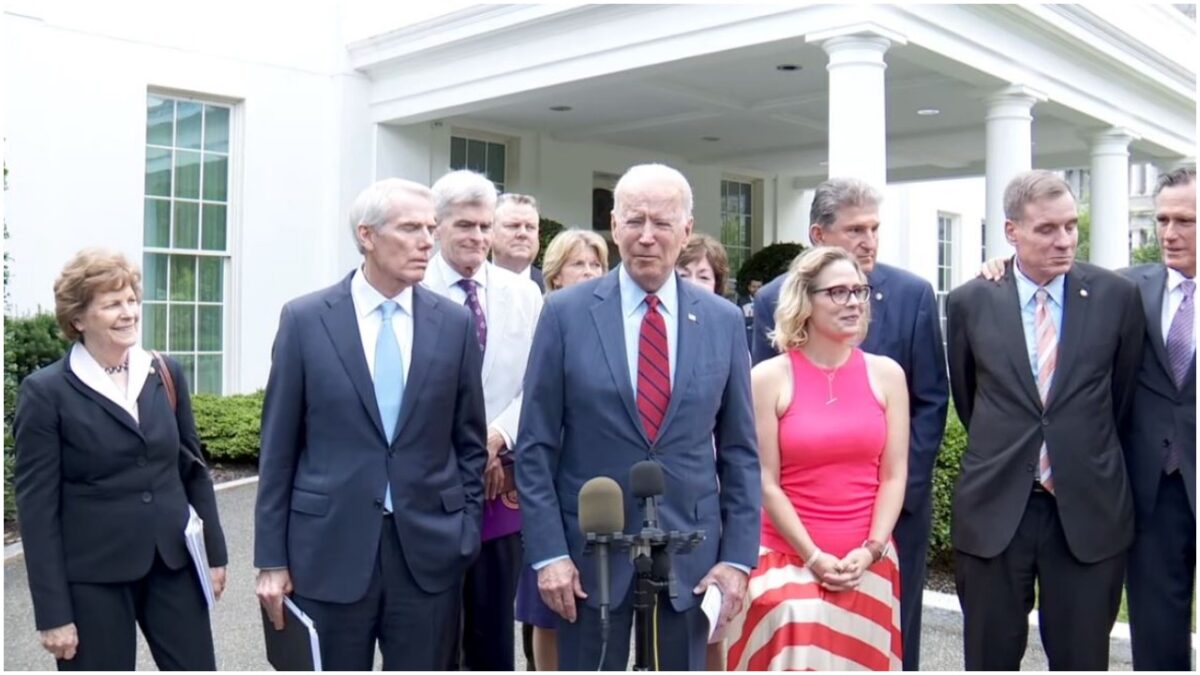 Appearing in the White House driveway, Biden said, “We all agree that none of us got all we wanted. I clearly didn’t get all I wanted, they gave more than I think maybe what they were planning to give in the first place … But this reminds me of the days when we used to get an awful lot done up in the United States Congress,” adding “Bipartisan deals mean compromise.” I guess bipartisanship is something only the whitest, most conservative democrats get a say in.

The negotiations ultimately settled on an investment of $1.2 trillion over eight years, with $559 billion in new spending. The funding will go toward narrowly defined infrastructure projects like roads, bridges, airports, and waterways. Its cost would be offset by a variety of revenue sources, but would not include any tax hikes on corporations or the wealthy.

This is a far cry from the ambitious American Families Plan that Biden set forth just months ago, a $1.8 trillion federal investment in education, child care, elder care, and paid family leave, in addition to traditional infrastructure work like rebuilding roads and bridges. Biden’s plan also included a huge investment in green energy and two free years of community college.

These are all very popular initiatives that would undoubtedly make life better for Americans. But thanks to the obstinacy of one Joe Manchin (and Kyrsten Sinema), Biden is unable to pass the package he originally pitched. Progressives like Rep. Alexandria Ocasio-Cortez and Senator Elizabeth Warren have shared their frustration with the compromise:

This is why a bipartisan pkg alone isn’t acceptable. The exclusion & denial of our communities is what DC bipartisan deals require. That’s how you get GOP on board : don’t do much/any for the working class & low income,or women, or poc communities, or unions,etc. We must do more.

Meanwhile, when representatives of excluded communities object to the exclusion &marginalization required to make many bipartisan deals work, they’re dismissed as “unreasonable.”

So who/what often benefits from this type of bipartisan dealmaking? Corporations & structural racism

We can’t let the infrastructure train leave the station without investing in child care and clean energy—or without making billionaires and giant corporations pay their fair share in taxes.

And even though this bipartisan deal has been reached, Republicans still need to find 5 more Republican votes to pass the bill on the 60 vote threshold. We’ll see whether Republicans are actually interested in bipartisanship (spoiler alert: they aren’t) or if this will just be Mitch McConnell once again yanking the football when senate Dems line up to kick it.

So we have 5 Republicans singing their own praises of bipartisan infrastructure. Where are the other 5 necessary for breaking the filibuster?

Let’s not get too excited about those 5 Republicans.
The GOP quit the
legislating business a long time ago.

Their sole purpose now is to protect Donald Trump and the Trump-GOP criminal enterprise.

Watching these centrist GOP and Democratic senators standing outside the White House praising themselves on a potential infrastructure deal tells you everything about the Senate. These folks love the process more than the outcome. And this comes days after S1 failed in the Senate

This devotion to “bipartisanship” at the expense of popular action items does not bode well for the Democrats in 2022. Voters are much more concerned with tangible benefits than the talking point that is bipartisanship. And it’s especially frustrating for Democrats who campaigned so tirelessly in 2020 to attain a majority in the House, Senate, and White House only to still see our grand plans held hostage by Republicans. Sure, something is better than nothing, but just once I wish Democrats could come together to actually make things happen for the people they represent.