HarperCollins is Publishing J.R.R. Tolkien’s Beren and Lúthien, 100 Years After It Was Written 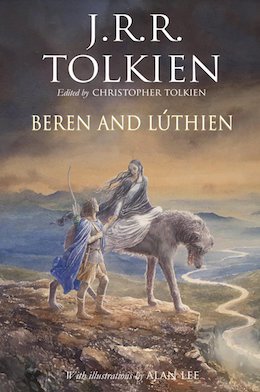 Those who’ve absorbed the entire body of J.R.R. Tolkien’s work will remember the tale of Beren and Lúthien, a human man and elf woman who fell in love. Their story appears in The Silmarillion, and it was written back in 1917. One hundred years later, HarperCollins will be republishing the story, along with other excerpts related to it and previous drafts of the tale, to be edited by Tolkien’s third son, Christopher Tolkien. The book will also feature illustrations by Alan Lee.

The original version of the story, which was written in 1917, underwent multiple drafts. In the first version, Beren was not a mortal man but an elf. The romance itself was inspired by Tolkien’s own relationship with his wife, Edith. A hundred years ago, Edith danced for her husband in a “a small woodland glade filled with ‘hemlocks’ (or other white umbellifers),” and it was this moment that served as the template for the first meeting between Beren and the elf princess Lúthien Tinúviel.

Lúthien isn’t a cliché damsel in distress, by the way. Jeff LaSala has an extensive essay over at Tor about the romance, and how even one hundred years ago, Lúthien defied conventions by saving herself from bondage, rescuing her mortal beau from danger, and fighting the story’s Big Bad at the end.

We’ll all have the chance to see how the various drafts of the story evolved over time, and whether they still hold up under modern scrutiny, when the upcoming HarperCollins version comes out on May 7th 2017.

(via Tor, image via Tolkien Society)