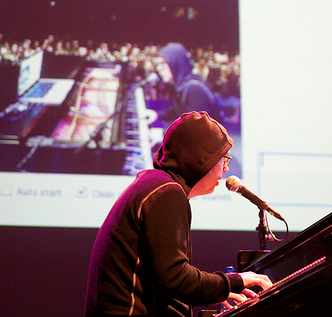 Last night, Ben Folds honored his acolyte Merton, of “Chatroulette Improv” fame, by improvising different piano songs for every person he came across on Chatroulette. Only Folds wasn’t performing from the comfort of his bedroom: he was performing live in front of 2,000 people in Charlotte, North Carolina.

Video and mini-recap after the jump:

Here are the people Folds encountered and wooed in song on Chatroulette at the concert:

*a shirtless guy wearing a twitter pendant
*a guy who looks sad, who is then cheered up by Ben Folds
*a note that says “if you turn your head, I win,” with a tally below; Ben Folds plays their game and is added to the tally. The tallier then writes his name (Bobby) and is sung to by Ben Folds and a chorus of Ben Folds and 2,000 people in Charlotte; Bobby proceeds to reveal his face and give heavy metal devil fingers
*a guy who is on his back and whose knee appears to be bigger than the rest of him
*a guy who is sitting on the toilet, who types “hell ya”. Folds: “I hope you’ve eaten your bran, Bam.”
*a totally dark screen
*a guy waving a little light, which prompts Ben Folds to begin “Free Bird”
Here’s the video: