Alison Bechdel Would Like You to Call It the “Bechdel-Wallace Test,” ThankYouVeryMuch 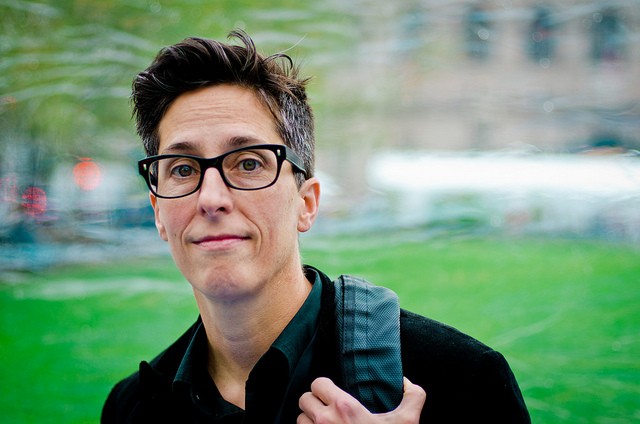 While it’s no secret that the Bechdel Test has its roots in several places, its being featured in Alison Bechdel’s 1985 comics classic, Dykes to Watch Out For, cemented it as being associated with Bechdel. Well now, she’d like to change that.

For those of you who’ve been sleeping under a rock, the Bechdel Test is when a feminist piece of media must 1) have at least two women in it, who 2) talk to each other, about 3) something other than a man. This criteria appeared in Dykes to Watch Out For, because of a conversation that Bechdel had with a friend, Liz Wallace, who mentioned those rules to her when Bechdel was looking for ideas for her comic. (PS, the rules also have roots in Virginia Woolf’s A Room of One’s Own where she writes, “All these relationships between women, I thought, rapidly recalling the splendid gallery of fictitious women, are too simple.” And that those relationships are generally “in their relation to men.”)

Now, in an interview on NPR’s Fresh Air, Bechdel reiterated that, especially since the test has become such a useful tool in analyzing media from a feminist perspective, that she’d love it to be attributed to Wallace as well. She said:

I feel a little bit sheepish about the whole thing, because it’s not like I invented this test or said this is the Bechdel test. It somehow has gotten attributed to me over the years.

It’s this weird thing. Like, people actually use it to analyze films to see whether or not they pass that test.

It’s interesting that she seems so surprised that it’s caught on the way it has, when she herself was so impressed by the rules that she chose to include them in her classic comic in the first place. Still, it’s cool that its popularity isn’t entirely due to her use of it, and that she wants to give credit where credit is due.

When Fresh Air‘s host, Terry Gross, asked her if she thought the test should be renamed the Bechdel-Wallace Test, Bechdel’s response was, “I would be very happy if that happened.”

Well, we here at The Mary Sue want you to know that we’ve heard you, Ms. Bechdel. We’ll do our best to refer to it as the Bechdel-Wallace test from now on.

(via The Atlantic; Image via Chase Elliot Clark on Flickr)