For $85 on Airbnb, You Can Be the Junk in Elon Musk’s Trunk

OK, on a technicality, but still. 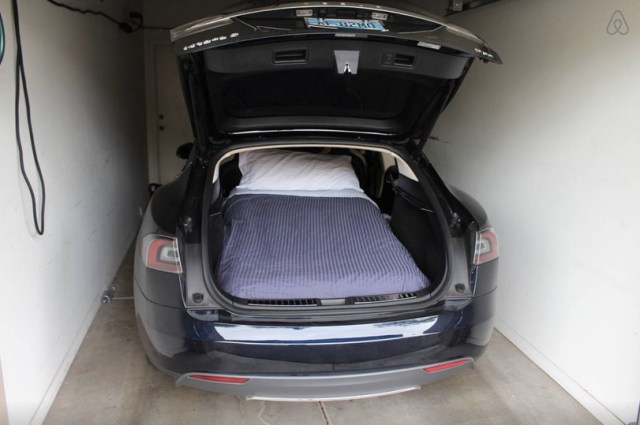 A guy from Phoenix, Arizona noticed his Tesla Model S had enough room in the back to fit an air mattress in there, and after using it as his own portable, environmentally friendly hotel several times, he’s opening up the opportunity to everyone on Airbnb. $85 might seem like a steep asking price to sleep in a trunk, but the Model S probably cost him more than some people’s homes you could stay in.

Sadly, the Model S in question belongs to Steve Sassman and not actually Tesla Motors’ own Elon Musk, but sleeping in its trunk is still probably the closest many of us would ever get to having one of the cars to call our own. The luxury car runs $118,000 and has great hotel-like amenities such as … heat and air conditioning that you can run all night without worrying about the car poisoning you inside the tiny garage, unlike Stone Age internal combustion vehicles.

Tall people need not apply, though, as Sassman wrote, “Sorry, NO NBA Players allowed. Despite my love for basketball, the Tesla is just too small for anyone over 6′ 6″. Please… stop asking.” But who are these people who sleep on their backs and don’t curl their legs up anyway? Sacrifices must be made to sleep in the trunk that Musk built!

And remember, you’re basically sleeping in the most boring Transformer ever in a hotel/car hybrid, and Sassman is also an Uber driver who will transport you wherever you need to go in the Phoenix area for a small additional fee. You know what? At first I thought this was silly, but now it’s actually sounding weirdly brilliant. Maybe there’s a reason Sassman can afford a Model S while I can only afford to sleep in one.

(via Business Insider, image via Airbnb)