This is the dress you're looking for!

The next eight seconds will change your life. Because when you watch the above video and see the amazingness of Carolina Huamani’s transforming BB8/R2-D2 dress, you will likely 1) scream with delight and 2) spend an indeterminate amount of time either trying to recreate the effect yourself, or waiting for a tutorial on YouTube from Huamani herself. Either way, much of your life will be consumed by wanting this dress so bad. 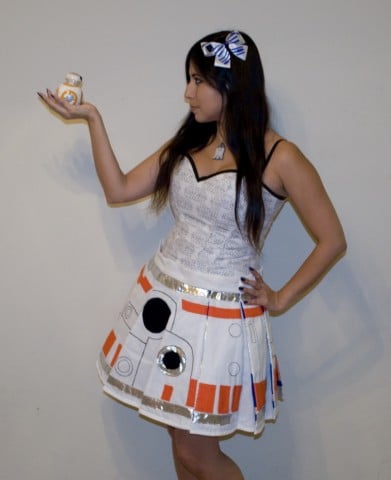 Huamani was determined to have something cool to wear to the Force Awakens opening night, and while her original idea involved R2-D2 exclusively, she couldn’t ignore the pull BB8 made on her and other Star Wars fans in the trailer. So, she figured out how to incorporate both into her idea, which took her about 40 hours to complete. As she told The Daily Dot:

I wasn’t able to figure out how to get them to share a single dress, so I came up with the idea of having two dresses in one. This dress was supposed to be a simpler construction since it’s purely fabric, but having to draft my own pattern and the fact that the skirt part was made out of several dozen panels meant it took a lot longer than originally anticipated.

She used Post-Its to help her figure out the construction, then used her Star Wars merch for reference! Huamani describes the process:

Once this full-sized prototype worked, I redrafted the pattern out of paper to figure out the placement for all the accent pieces of R2-D2 and BB-8, using my Sphero BB-8 droid and an R2-D2 popcorn holder for reference.

All the accents were sewn on individually before I could assemble the overall skirt. After that, it was a matter of sewing together the panels and hand stitching on the final details. 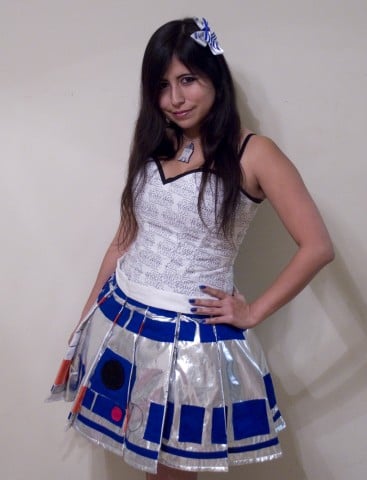 Now, of course what everyone wants to know is – how can they get their hands on one? Huamani only made the one, and she took a well-deserved break before plunging into con season:

I’ve been asked many times since the dress started getting popular to make a tutorial, and I may attempt to do that in the coming months in the con off season. I took a two day break after completing the droid dress to catch up on a lot of lost sleep, and now I’m back in full cosplay prep mode for PAX South. I figured out the pattern by playing with Post-it notes and weirdly a bit of trigonometry, so I’m sure someone will figure it out before long. Judging from some of the comments, they’ve gotten fairly close already.

The creativity of the cosplay community continues to astonish me, as I can barely sew buttons back onto a shirt. Congrats on the amazing dress, Carolina! The rest of us will be waiting with baited breath for that YouTube tutorial! For more of Huamani’s cosplay, check out Lemon Drop Cosplay on Facebook.

What’d you think of this dress? And if you were to create one for yourself, would you stick with these two lovable droids, or would you want to incorporate two of your other favorite characters? Tell us in the comments below!