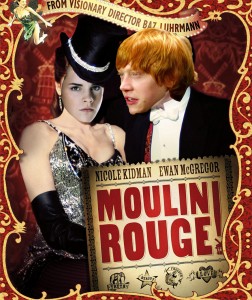 “The first one came along and they rang me, and while I love the pictures and the books now, then I thought, ‘What’s that?’ And said, ‘Well that sounds interesting, but I’m thinking of doing a reinvention of the modern musical’, and that was Moulin Rouge. So I’m an obvious idiot, because I should have taken Harry Potter.” — Director Baz Luhrmann on how, in another life, he might have directed Harry Potter and the Sorcerer’s Stone.

I can see it now. Before Moulin Rouge the only movie he’d directed was Strictly Ballroom, which isn’t quite so… er… Baz Luhrmann-y as his later efforts. So we’d get a few minutes into the movie, and then: BAM! Sparkles! Dance parties! A forbidden romance between McGonagall and Snape told through anachronistic musical numbers! Warner Bros. would never have seen it coming.