Yesterday, I brought you Part 1—A.K.A. the “Team Billie Jean” session—of the Battle of the Sexes press conference this weekend. Today, it’s “Team Bobby’s” turn, as members of the cast and crew, led by Steve Carell, and directors Valerie Faris and Jonathan Dayton, talk about the complex figure who is former tennis pro, Bobby Riggs.

Carell was thrilled to play a character like Bobby:

“There’s that public persona, and then there’s this guy that no one really knew. When I started doing research, there’s a great 60 Minutes interview with him, and he’s doing his thing, he’s playing his character…and the conversation came around to his wife, and talking about how they’ve recently separated, and Oh, she’s better off without me, and she’s a great woman. The best…and even within all of that bravado and that crazy, over-the-top nature of his, you could see this pain that he was suffering through. And to me, that was sort of the root of what I was going for. There was this public persona, but even in that public thing, you could see the pain, the complexity that was lying underneath it all.”

Shue said that it was easy for her to play someone who loved Bobby, in large part because of Carell’s performance, but also because she saw something vulnerable about Riggs. “What I loved about him,” she said. “Was the sheer desperation inside of him to be liked. I think that Priscilla recognized how vulnerable he was, because he had that inside him, and that allowed her to really love him and want to take care of that part of him.”

One of the most infuriating characters in the film is Jack Kramer, the man responsible for forcing King and the Original Nine out of the USLTA by refusing them the pay increase they deserved, and all-around sexist pig. The conference moderator asked Pullman to talk about what it was like to play someone like that, running all that sexism through his head for the role. Pullman replied:

“I had seen the Jack Kramer raquet, and that was such an institution for tennis. And he has a book called My Life in Tennis: Forty Years Experience. When you think of what an institutional man he was—he was the number one player—and when you look through, with a real person, you can find their obituaries. His is full of great praise, and great warmth, and how he lit up the room whenever he came in, and he had the most curmudgeonly partner that he played with, who was known for being one of the orneriest persons in modern sports. And he said I was made a better person by Jack Kramer. So, that’s what I came to [the directors] with, and I said How do we include all of that?“ 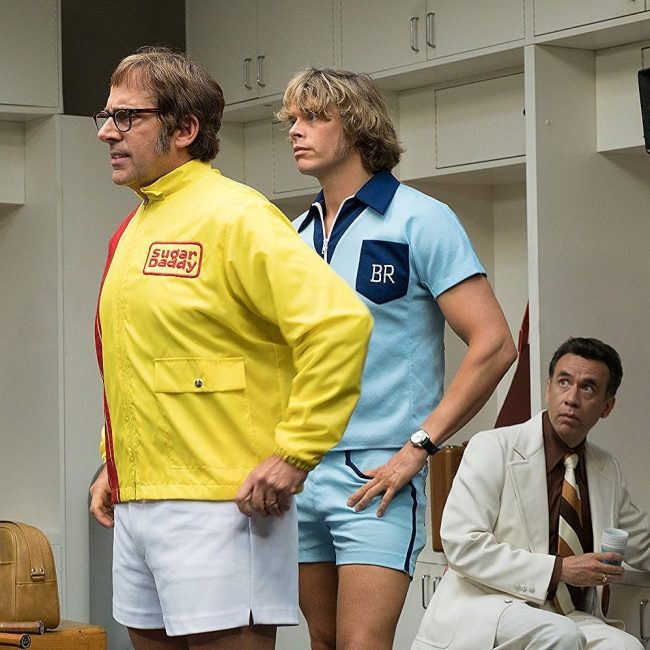 Olsen was asked what the best part was about playing the person who was essentially Riggs’ wing-man. “Besides those short-shorts?” he asked as the crowd laughed. “I got a lot of comments on Instagram about those short-shorts. It’s gonna really help out the box office between [Steve’s] mutton chops and my short-shorts…” You can check out the photographic evidence above.

He then went on to speak respectfully about the man he portrayed. “Lornie’s a big part of the movie,” he said. “He was there while we were shooting these scenes. He’s amazing, he’s 73 now. I played him [in tennis] at lunch, and I got one point off him. He hustled me for, like, twenty bucks, which I then paid him. He’s a remarkable man, and I wanted to make sure to kind of capture that cool kind of swagger that he has in this relationship…and then, working with Steve, I’ve been the hugest fan for, like, twenty years, so I was just excited to show up to work.”

The conversation then turned to the music of the film, and if you haven’t yet heard Sara Bareilles’ “If I Dare” from the film, prepare yourself for your new female power anthem.

Of the process of writing the song, Bareilles said, “I wanted something that felt innately feminine about the song, but also strong and powerful as well. And it’s so cool to be building off of Nick’s score originally anyway. There was something really melodic and lyrical about the music anyway. Then you have Billie Jean as an inspiration, and just wanting to speak to her fire and stay feminine.”

Britell’s score was very much influenced by the decade in which the movie is set, but he wanted to ensure that the sound wasn’t over-the-top and obvious. He says:

“When you’re doing something that’s set in 1973, you want to figure out how to approach that in a fresh and unique way without being sort of overtly 70s. So, all of the orchestra sessions actually, we recorded with vintage microphones, and I even would apply analog tape sound to some of the recordings just to give it almost a subconscious feeling of the era. Initially, too, we actually thought about the instrumentation, and one of the first ideas we had was what if I wrote classical music, but played it on 70s rock band instruments? And we started with that, but then we added some strings and some woodwind instruments, and it eventually became a symphony orchestra, so it sort of evolved from there.”

Directors Faris and Dayton are both a long-running directing team as well as a married couple, and their partnership with Carell goes back to their feature directorial debut, Little Miss Sunshine. From that first film, their work had always been credited to “Jonathan Dayton and Valerie Faris.” On Battle of the Sexes, however, that script has been flipped, and you’ll notice that credit for this film goes to Valerie Faris and Jonathan Dayton.”

“It was his idea. Just want to give him credit,” Faris says, when asked about the change. Dayton continues, “It began alphabetical, and we’ve been doing this for so long, it felt like the right time to remind everyone that it’s a team.”

“I’m not just the and,” Faris concluded, to massive cheers. 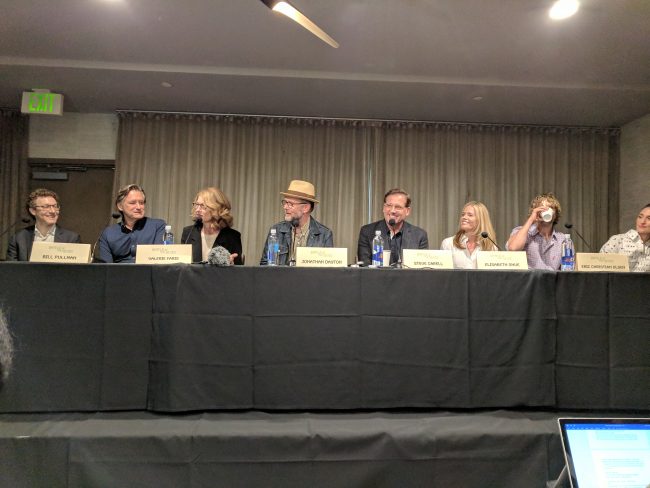 When doing a period piece, particularly in a time period during which the participants were alive, there are several lenses going on at once: there’s the way it actually was, the way you remember it, and there’s looking at it through the prism of a modern lens. I asked Team Bobby if they were surprised by anything they came across regarding the sexism, or the LGBTQIA community as they did their research. Either that it was even worse than they thought, or that there were areas where these marginalized communities had a surprising amount of agency.

For example, I was surprised by the fact that even though Riggs was the name, it was Priscilla’s money who kept him afloat through his gambling addiction and constant hustling.

Shue replied, “I guess I feel like my mom was very similar to Priscilla in that she was trapped by her circumstances in the way that society saw her. She never got to have a career, she never saw herself as having those aspirations. So, I did like that I had power over him with my money. But I think there was sadness in her too. She wasn’t going to ever have a dream of her own, and I felt that more strongly than any power I had over him with my money, to be honest.”

Faris described the shock of having to face exactly how sexist the times were by watching Howard Cosell footage through a modern lens. She said:

“Watching the original match, we were just struck by Howard Cosell, who we always thought of as a fairly liberal guy. When we heard the things that he said, and the way he put his arm around Rosie, we were just kind of shocked by that. So we added a lot of that into the movie, because it changed our perception of just how acceptable it was to call women “little lady” and talk about Billie Jean like “if she’d just take her glasses off and put her hair down, someone would offer her a Hollywood screen test.” Those things were just so…not noticeable at the time, maybe? But looking back at those…what was acceptable then hopefully isn’t so much now. Although I think in some ways we’re facing it again in even more offensive ways.”

The conversation then turned to Riggs’ showmanship, and Carell sees this as the key to his entire personality. He says of Riggs:

“He created a character. I think he saw what was happening in the zeitgeist and decided to try to profit from it, really. I don’t think, and correct me if I’m wrong, and who knows, but I don’t think he cared very much about politics. I don’t think he had a foot in feminism or chauvinism. I think he just wanted to make some dough, and he wanted to promote himself, and he wanted to be famous. He had a chip on his shoulder, because when he was a star, he didn’t get the money. He didn’t get the acclaim. It was in the late 40s, and tennis wasn’t a big deal. So, at this point, he was in his 50s and playing in the senior circuit, and he just wanted to have his due.

He specifically took a page from Mohammed Ali. It’s the same kind of thing. It’s this bravado and this character, this creation. I maintain that he just wasn’t that good an actor, and that was part of his charm. Because you could tell that all of these things that he was espousing weren’t connected to his heart. And I think that was part of his charm. I was eleven at the time, and I knew it was a put-on. You could tell the guys who really were saying these things and meant them.

That’s not to say that saying them isn’t dangerous as well, even if you’re just joking around, because other people who really do believe that pick up the mantle and run with it. So, there is danger in that. But I think he as a person was a benign self-promoter.”

Dayton told the audience that he and Faris wanted to ensure that the film didn’t have clear “bad guys,” and that the film, and the people upon which the story is based, taught him a lesson about fighting for change with grace.

“Even [Jack Kramer] in his rhetoric is a dimensional person who deserves respect,” Dayton says. “And that’s one thing I think through this project that I’ve learned now more than ever, we need to respect the people you’re facing and engage them. Billie Jean never called him a name. She wanted to engage him and talk to him. She beat Bobby, because she respected him. And it’s also a long game. Billie Jean showed that you might not win the early battles, but you stay at it, and in the end you can prevail.”

So, in other words: Nevertheless, she persisted.