Why Katsuki Bakugo Is One of My Favorite Shonen Anime Rivals

Get in, extras, we're celebrating Kacchan! 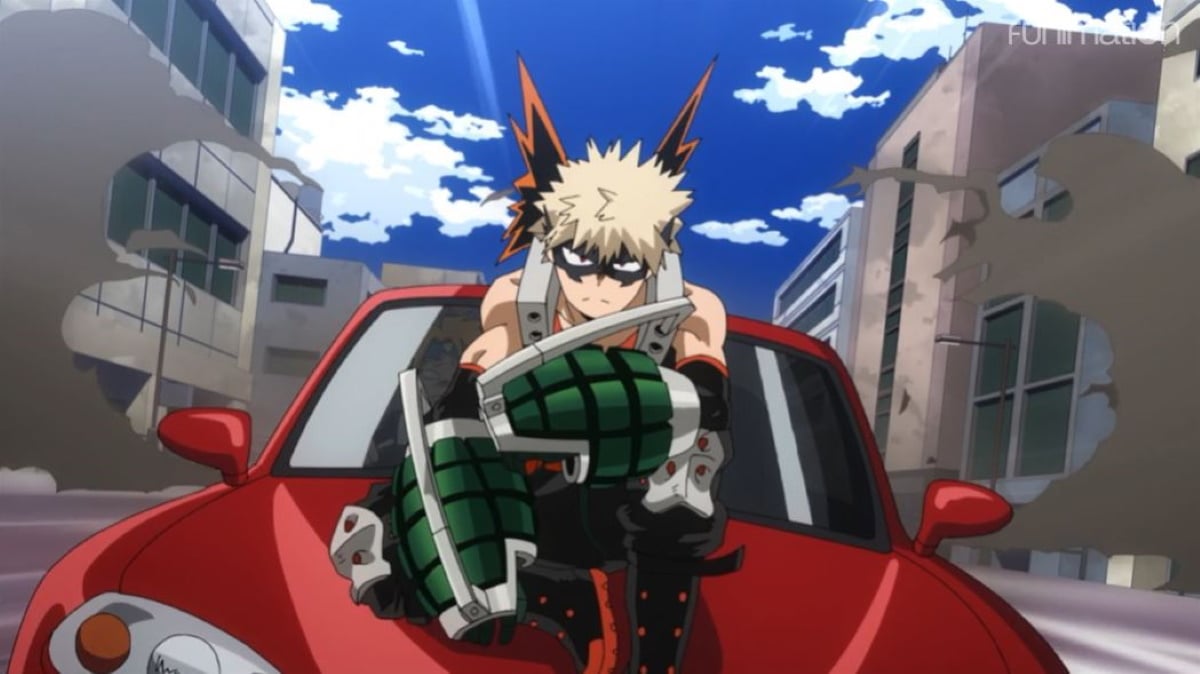 Spoilers to My Hero Academia anime and manga

With every great shonen anime/manga comes a monumental rivalry, one that typically revolves around the lead character. My Hero Academia is no exception, the series kicking things off with the rivalry between Izuku “Deku” Midoriya and Katsuki “My Hero Name Is Great, Actually, You Just Don’t Have Good Taste” Bakugo, two characters who have known each other since childhood.

And when I say kick things off I mean it, it’s the very first scene in the anime and the first page of the manga. Deku’s trying to protect a kid from Kacchan (that’s Bakugo) and he gets beaten up for it.

If you’re a regular shonen anime viewer you recognize the context clues of “this is your main rivalry.” You know that, over time, they’ll come to share a bond and grow from their interactions with each other. Even so, I was still surprised by how much Bakugo grew, how his actions really demonstrated the effects this society had on its children, and how quickly he went about doing better. It’s honestly a lot faster than some of the adults in the series and, well, in real life. A teenager grasping onto the concept of “holding yourself accountable” is commendable, and something many can stand to learn from.

Yes, I do adore Bakugo for his explosive personality, which is more comedic than actually dangerous at this point in the series, but what I love most about him is his development as a character. 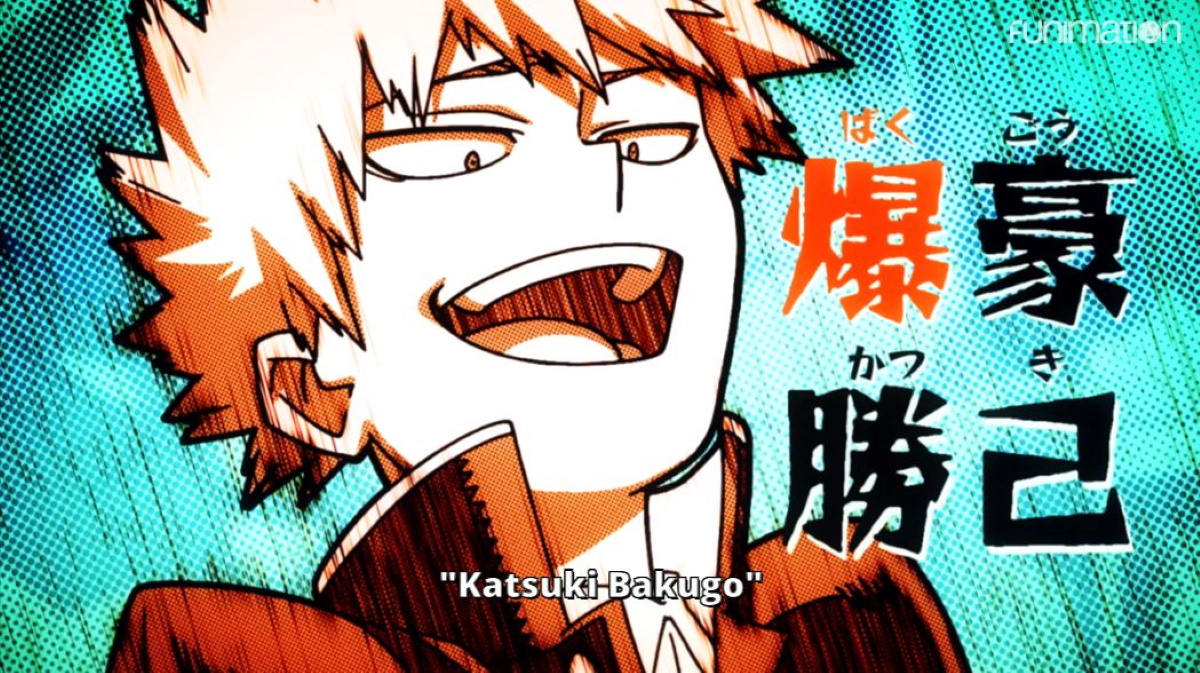 As much as I adore the angry little pomeranian that is Katsuki Bakugo, even I have to admit that those first couple of episodes with him are rough. His attitude is extremely abrasive, especially when put up against someone like Deku, the underdog who hits your heart because all he wants to do is be a hero.

I related to Deku immediately. His desire for something he’s been told he can’t have because of something that’s out of his control hit me harder than I expected it to. It’s not his fault he’s quirkless (this universe’s definition of those who don’t have a superpower, a rarity since 80% of the population has some kind of ability), but since he is, he’s already been counted out by everyone. So seeing Deku deal with this loud teenage boy who could literally set off explosions was a LOT.

But then we get to the part where Deku runs in to try and save Bakugo from a villain. Bakugo, of course, tells Deku to back off, doesn’t even thank him when the dust settles.

It’s really easy to write Bakugo off as a jackass at this point but there are two things I think about here:

Thus begins my descent into “Bakugo’s the way he is for a reason,” that reason being society and how it puts value on a person based on the power they possess.

It wouldn’t be until his teenage years that Bakugo would start to get lessons in humility, so this kid spent a cool decade and some change being gassed up because of his cool quirk. We see it in flashbacks where his classmates and teacher praise him for his quirk. We bear witness to it, constantly, with Deku praising him over and over again. We even hear it from his own mother, who admits that her son has been receiving kudos for, well, existing with awesome power.

And it’s not like Bakugo learns humility in an easy way. On top of being amongst a class full of wildly talented students, this incident with the villain in the second episode isn’t the last time Bakugo’s well-being was overlooked because he’s so impressive. The same thing happens in season 3 when he’s kidnapped by the main villain group of the story.

Yeah, he gets held hostage by villains twice (once before he starts attending his dream hero academy, and again during his first semester), the second time leading to the retirement of his childhood hero, All Might.

Did anyone check on him? LOL, no. Him a strong boy, remember? 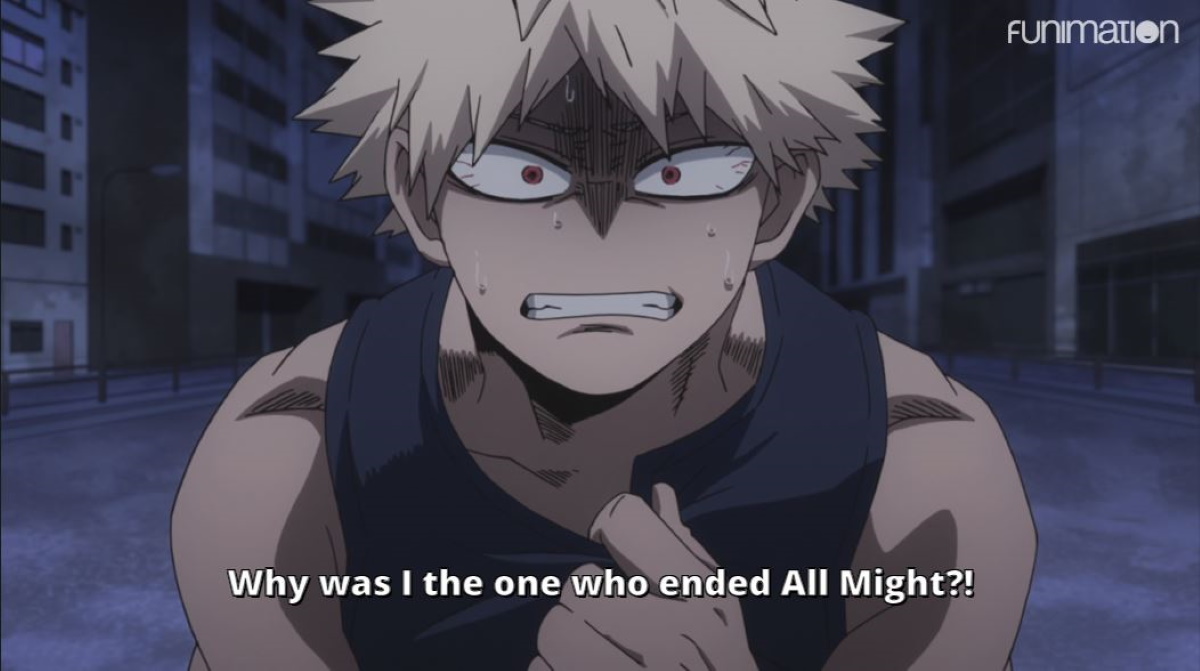 As much as I related to Deku in the beginning (I still do) this whole revelation of everyone not bothering to pay attention to a child in distress because they assume he can handle it is… heavy. I felt for Deku because I know what it’s like to be denied things you want over something out of your control. However, when Bakugo broke down about everything? That also hit me. I am painfully familiar with having folks assume I’m okay because “you’re so strong all the time” even under the most severe of circumstances. People wonder why you don’t ask for help, but when you’re surrounded by people complimenting your strength you think, “I can’t ask for help because I’m supposed to be strong.”

Bakugo’s attitude didn’t appear out of thin air, it’s the result of living in a world that looks favorably on impressive abilities and strength, so much so that this teenage boy’s mental well being after being held hostage by villains was ignored because he appeared to be all right since he’s so strong.

So years of empty praise.

Leading to more praise for being so strong during two terrifying villain encounters instead of realizing he was a victim of them.

No lessons on valuing people based on who they are instead of the power they possess.

No lessons on asking for help and not trying to be “the hero” all by yourself.

He’s the perfect reflection on how messy society is, especially when you realize that Bakugo, ironically, gets labeled as acting villainous on multiple occasions.

To an entire stadium of people, at one point, he’s seen as approaching the whole being a hero thing in the wrong way. They think he’s too aggressive even if, in the fight in question, he’s actually showing respect to his opponent by not underestimating her.

Aizawa (their teacher) says as much, and wow, what a fickle thing society can be, because we went from labeling Bakugo as impressive because of his quirk, then monstrous because… of his quirk.

Ah. Something else I can relate to. Jesus Christ.

What truly surprised me is that all of this happened in just three seasons of anime. I honestly expected this to take much longer. I also expected it to be seen as being Bakugo’s own doing, so I was delighted to see All Might taking responsibility for not noticing the signs I’ve laid out. 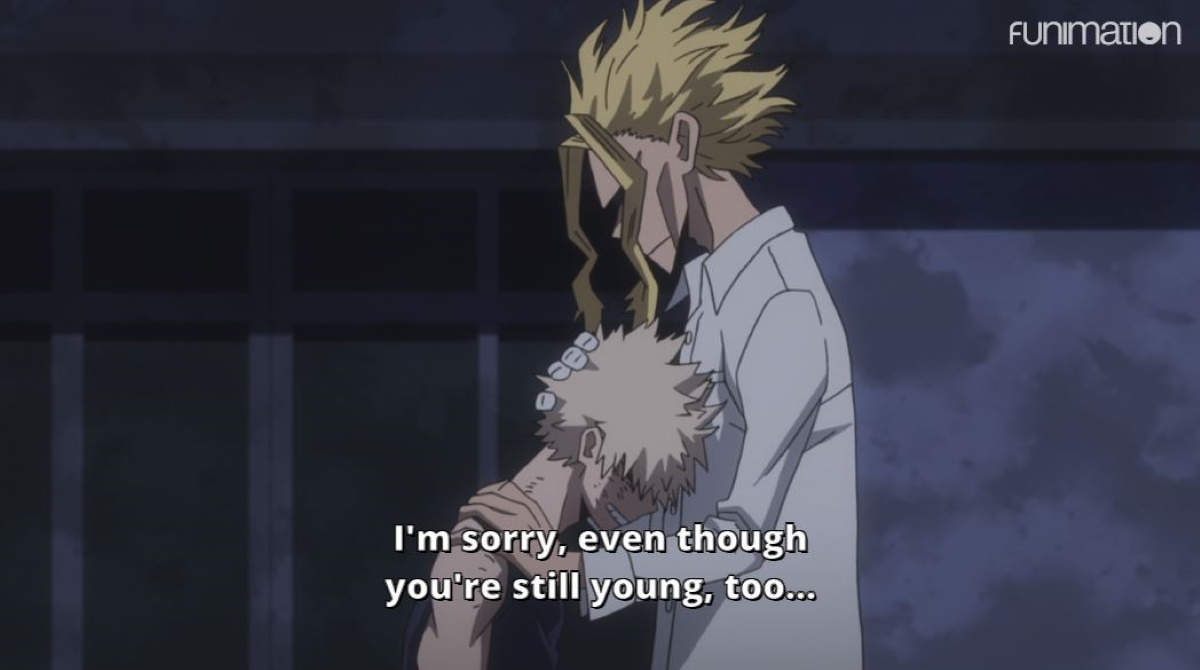 After this Bakugo goes in a really satisfying direction. Anime watchers will get a taste of it this season, but if you read the manga and are caught up, you know exactly what I’m about to reference. 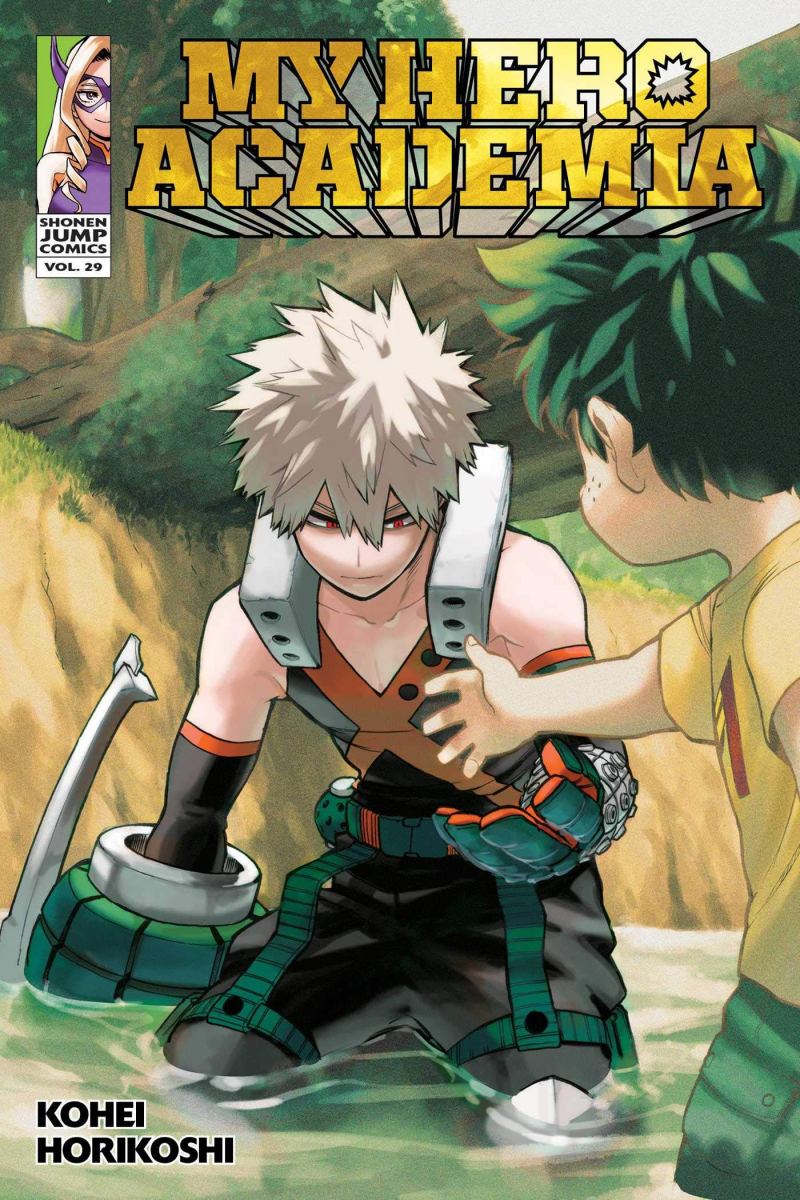 From the cover of volume 29 to Bakugo’s body “moving on its own” to protect Deku, the fact that such a huge moment is titled Katsuki Bakugo: Rising is peak character development. We also discover that All Might figured out that Bakugo’s trying to atone for what he’s done in the past. While I absolutely feel that society, and the adults around Bakugo, are the reason he turned out the way that he did, there’s still the part where you have to decide what you’re going to do now that you’ve had the chance to take everything into account. Do you just keep being the brash shit talker who picks on the main character, or do you grow beyond that and realize that you can be so much more than the guy who looks down on those who are perceived as being weaker than you?

Bakugo gets this pretty quickly, his backtalk with Deku now feeling like genuine rival bickering with no real bite to it, and as the story progresses he focuses more on showing his development via the actions he takes.

You can say you’ll do better, yes, but it makes more of an impact if you make a visible effort.

There’s no way in hell the Bakugo we met, in the beginning, would ever dream of running alongside Deku the way he did in the manga, the way he did in the second movie, Heroes Rising, or even the cute little opening to the first episode in season 5. The world they live in is in desperate need of reevaluation (which is the manga arc we’re in now, to be honest), but Bakugo isn’t sitting around and waiting for changes to be made, he’s improving himself, and as expected with his attitude, society will need to catch up with him. I honestly didn’t expect all of this in my shonen rival character. I truly did expect the unreasonable hothead who slowly comes around after maybe, I dunno, 500-some chapters? I also expected some tragic reason as to why he acts the way he does, but honestly, Bakugo has a regular-ass home life, no killed off parents or traumatic abuse, he’s just a kid full of an extraordinary amount of pride because of the world he lives in and the people who put him on a pedestal at age four because of his power.

And really, that makes him even more interesting a character, because it’s something we can all relate to.

Also? He maintains that explosive personality that we’ve come to expect. Just because he’s stopped looking down on others doesn’t mean he isn’t gonna show up to a battle with his friend hotwiring a car. The fact that the lesson in humility didn’t stop Katsuki Bakugo from being “10o% That Bitch” makes his growth even more delightful.