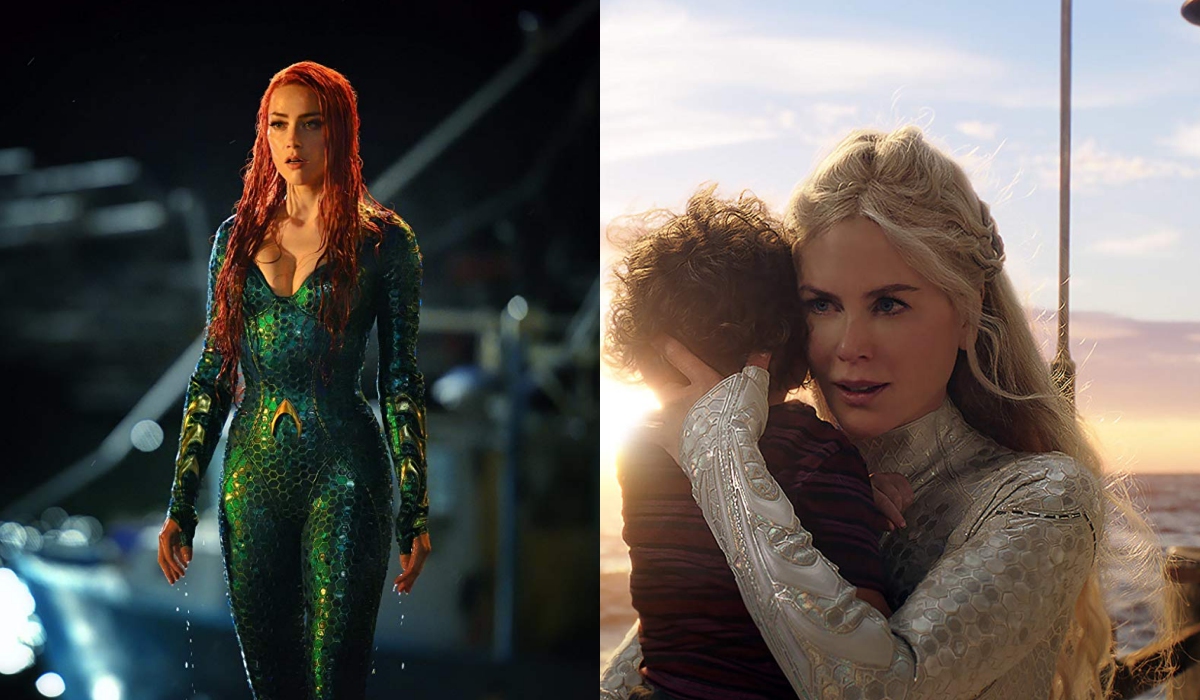 Aquaman is a delightfully fun, bombastic movie that is defiantly silly, but has a lot of heart, which I think is appropriate for a comic book movie. Sometimes I feel like we have been so spoiled by all these directors who want to “play with” the genre of the comic book movie, but fail to appreciate that it can allow them to be fun/silly.

But among all the things I loved about Aquaman, the biggest pleasures were Mera and Atlanna.

Mera, played by Amber Heard, is a literal warrior princess who defies her father, daughter of King Nereun, her nation, and the laws of Atlantis to stop Orm from waging war on the surface world by attempting to recruit Arthur into taking his rightful place on the throne.

From the very beginning, Mera is set up as being equal to Arthur. It is she who assists him in the rescue of his father during Orm’s first attack on the surface world, using her hydrokinetic and telepathic powers. Throughout the movie, she holds her own and shares a dual action set piece where she never needs to be saved. In fact, in Italy, she is the one who eventually helps Arthur recover from his injuries during the fight with Black Manta.

In the one big scene where she needs to be “rescued,” she’s saved by Queen Atlanna, not Arthur.

Mera is portrayed as an equal to Arthur, who is only restricted from being the full-on hero by the “true king” plot element, necessitating that Arthur get the trident of Atlan in order unify Atlantis under his control.

For the record, I have zero problems with the true king narrative in Aquaman, nor with Arthur being the true king. As bro-y as Jason Momoa comes off at points, it’s also clear that he’s a kind individual who learns from his mistakes, and the chip on his shoulder is well earned from being considered a half-breed and denied a relationship with his mother because Atlantis is bigoted. We rarely see true king narratives with men of color, so I’m not going to be mad at Mera taking a very slight backseat.

Mera is a great example of how you can have a love interest in a comic book movie who isn’t constantly hyper-sexualized, who is competent without needing a dude to help her, and that you can set up these stories in ways that aren’t a continuous “he’s dumb, and she’s a nag” gag.

Once they reach Italy, the two have come to understand each other and can see the value in earth other’s experiences. By the end of the movie, you can see them as partners and equals, if not in pure power, then in terms of mutual respect. They need each other, and that’s really refreshing, considering most of the time, even if we do have one or two “she’s a badass” scenes, the love interest is eventually put purely in girlfriend mode.

Mera is part of the final battle as both a warrior and an unofficial diplomat, showing there is strength in both fighting and talking. Even with her own biases against the surface world for their pollution, the lessons learned by Queen Atlanna have given her the ability to see the wrong in Orm’s actions, even if she also dislikes the surface.

Queen Atlanna, played by Nicole Kidman, leaves a big presence despite having small screen time. Her love with Thomas Curry takes up the entire pre-title narrative, showing her as a lover, mother, and warrior all in the first ten minutes. Even her decision to leave her son and husband isn’t something she’s dragged into doing by warriors. Atlanna defeats them with enough ease, but leaves knowing that the only way to get peace for her love and son is to stop running as she did before. It’s a small thing that shows her growth, and the trident she leaves behind is the weapon Arthur uses.

It is her assumed death that causes Arthur and Orm to take their similar mentalities in being cynical and bitter, with their fathers being left the burden to buoy their humanity. Tom rises to the occasion, being the true romantic lead, while Orm’s father was clearly an asshole who doesn’t mind having a wife via coercion, willing to feed her to monsters.

In the third act, we see that Atlanna was powerful enough to survive her death sentence in The Trench and has worked to try to escape several times to get back to her sons.

Watching Atlanna, I couldn’t help but think of Frigga from the Thor movies, who was in the movies for mere minutes, given one cool scene, and promptly killed off for the drama of bringing the boys back together. Not only does Atlanta get to be sexual, loving, and fierce, but she gets to leave, and we see her being reunited with her love in the end.

She is the bridge between her two sons, and as soon as she arrives in her Nicole Kidman glory, everyone bows, as they should. We barely get moms to live in these movies, but to live and be romantic warrior queens? Sign me up.

This article is not to say that the MCU hasn’t given us dynamic female leads before. However, it is worth noting that Mera has more screen time that most of them, a really clearly established backstory, a living parent who plays a role in the story, and is an active participant from start to finish. That is a rare feat for a character who could have easily been made “just” a love interest.

We’ve seen it done well with the women of Black Panther, Gamora, Valkyrie, The Wasp, and Diana. Pepper also does get to have climactic set pieces in the Iron Man movies, but I’d argue that it isn’t to the same degree as Mera.

Is Aquaman a “perfect” movie? No, and it’s filled with a lot of stuff and exposition, but as someone who knows the bare minimum about Aquaman, it was not a problem for me. It’s an adventure movie with some fun set pieces and sets up a great second movie villain with Black Manta, one of comics’ few dynamic Black supervillains, with a compelling motive for killing Aquaman while still being 100% bad.

It has a mixed-race protagonist with two living parents who are happily in love, with both parts of his identity being important to his character—and we got two great female characters, to boot. I’d call this a win for Mera alone, but having Mera and Atlanna, in the end, was a great place to leave DC’s second big hit.