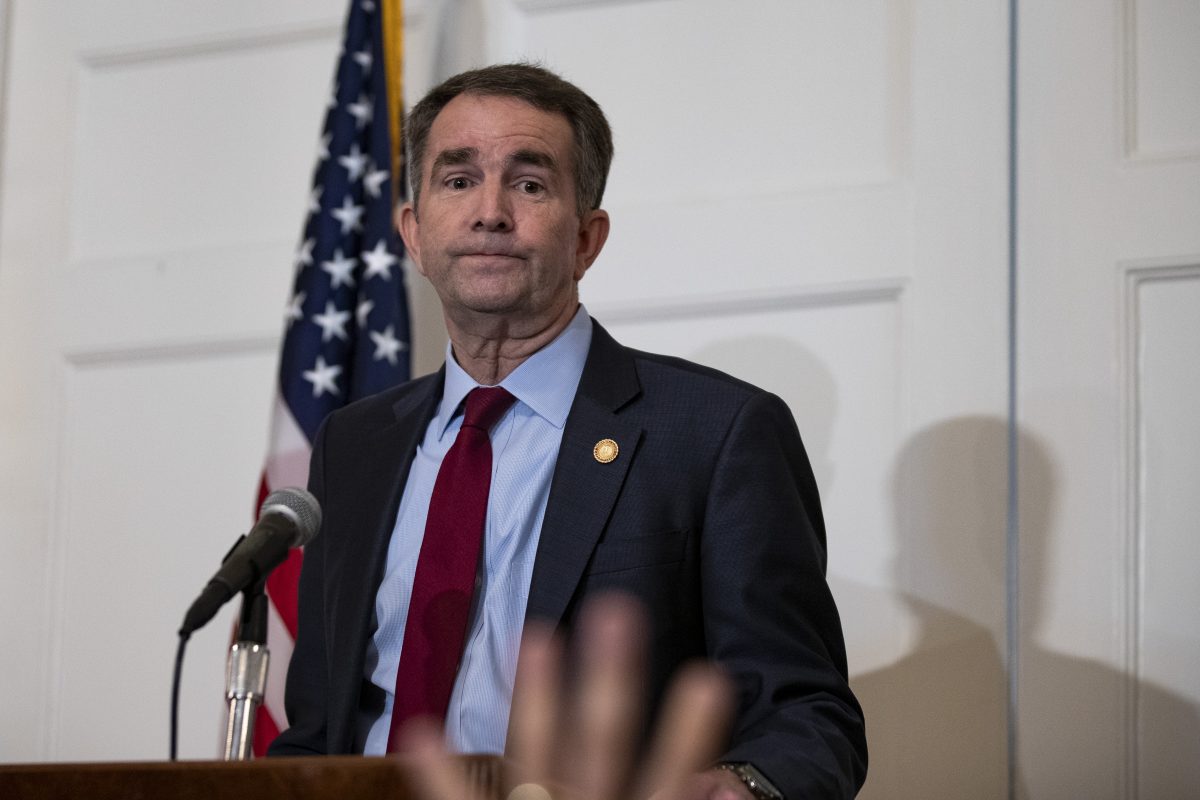 Earlier this month, Virginia’s Democratic governor, Ralph Northam, came under intense criticism when a racist picture from his medical school yearbook was made public. The picture featured two men, one dressed in a minstrel costume with blackface and the other in a KKK robe and hood. The picture was on Northam’s yearbook page, next to other photos of him and under the header of his name, but it wasn’t clear which, if either, of the men in this particular picture was Northam.

Northam’s public response to the photo was bizarre. First, he said that he was in the photo, but didn’t say which figure he was, and apologized for his actions. Then he retracted that statement and said he wasn’t in the photo, though he didn’t offer an explanation for why the picture was featured under his name in the yearbook. And while claiming not to be in this photo, he admitted that he had done blackface before, for a Michael Jackson costume in a dance contest. He also said that he has a “very close [black] friend” who, during his campaign, explained to him why blackface is racist and offensive so now he knows not ever to do that again.

Meanwhile, the state’s Lieutenant Governor, Justin Fairfax, has been accused of sexual assault by two women, independently of one another. Vanessa Tyson, an associate professor of politics at Scripps College, says she was assaulted by Fairfax in a hotel conference room 15 years ago. Her detailed description of an instance of consensual kissing-turned-forced oral sex is horrific, and even for an act that may have taken place before Fairfax entered politics, it’s profoundly upsetting that such a man would think himself able and deserving of a leadership position.

Fairfax denied the accusation, but then last week, another woman, Meredith Watson, “reluctantly” came forward to also accuse Fairfax of raping her. A statement from her attorneys says that the details of her “are similar to those described by Dr. Vanessa Tyson.”

A huge number of Democrats are calling on Northam to resign, and Northam himself has said Fairfax should resign. They have both said they’re not willing to do so, but hypothetically, who would that leave to take over the position of Governor? The next in line would be attorney general Mark Herring, who–guess what–also has a history of blackface.

Please see my statement below. pic.twitter.com/FBDcgxHOq9

“It was really a minimization of both people of color and a minimization of a horrific history I knew well even then,” he wrote, describing his decision to dress as “rappers” with some friends when he was a 19-year-old undergraduate.

Next in line, by the way, would be Republican House Speaker Kirk Cox, who won his position by having his name drawn out of a hat at random after a tie vote.

But, again, that’s not a line of succession that matters because none of these men shows any willingness to resign. Not only that, but Northam is attempting to sell himself to his constituents as the best or even only person to heal the state’s racial inequities.

It’s obvious from what happened this week that we still have a lot of work to do. There are still some very deep wounds in Virginia, and especially in the area of equity. There are ongoing inequities to access to things like education, health care, mortgages, capital, entre­pre­neur­ship. And so this has been a real, I think, an awakening for Virginia. It has really raised the level of awareness for racial issues in Virginia. And so we’re ready to learn from our mistakes.

Then he went a step further and told CBS’ Gayle King in a televised interview,

Virginia needs someone that can heal. There’s no better person to do that than a doctor. Virginia also needs someone who is strong, who has empathy, who has courage and who has a moral compass. And that’s why I’m not going anywhere. I have learned from this. I have a lot more to learn. But we’re in a unique opportunity now.

I’m sure Northam thinks he’s being cute and clever but this is a terrible analogy. There’s “no better person” to heal a state from centuries of institutional racism than a doctor? A doctor who took part not just in one photo (or dance competition), but that participated in and benefitted from racist systems.

The yearbooks from Northam’s medical school show racist photos of both students and professors as recently as 2013–and not more recently only because yearbooks were discontinued after that in order to preserve the school’s image, not because anything was changed within the school itself. (There are plenty of people talking right now about how unfair it is to apply 2019 “politics” to events of the 1980s or earlier. Those are the same people who deny not just the lasting effects of racism of that era, but also the existence of racism now.)

There is a deep history of racism in the medical community, as well as in politics. And for Northam to have grown up and built a career within those systems, and to still declare himself his state’s best savior is as ignorant as it is narcissistic.

Northam apologized for ever wearing blackface, saying his good black friend taught him why that was wrong. But in the very same press conference, he appeared to be willing, if not eager, to demonstrate his moonwalking abilities after a reporter asked him to. His wife stopped him (he claimed he was never going to dance, but that sure wasn’t how it looked), and had to remind him of how inappropriate that would be, and that this situation needed to be treated with some gravity.

Talking with Gayle King, he said he’s learning about the ways in which white privilege has impacted his life, but he also referred to slaves as “indentured servants.”

Northam says he’s going to do a “reconciliation tour” to talk with constituents about issues of race. According to BuzzFeed News, Northam’s advisors “have assigned the governor homework: He’s begun to read Alex Haley’s ‘Roots’, and ‘The Case for Reparations,’ the seminal essay in The Atlantic by Ta-Nehisi Coates.”

If Northam genuinely wants to fill in the holes in his understanding of racism and race relations, great. But he cannot commit to really learning while also simultaneously declaring himself the #1 best person to lead his state–any state, but especially one whose population is about 20% black–into an era of racial healing.

Virginia’s voters elected a huge number of Democrats to lead their state in the last election. It is totally unacceptable that if this party were to hold themselves to the ethical standards they claim to believe in, that the state would fall into the hands of a Republican who only holds his place in line because his name was drawn out of a hat.

But it is equally unacceptable for these Democrats to (in some cases) admit that they have participated in horrible acts and still maintain that they deserve to be leaders of their state. Northam, especially, is demanding to position himself as the central figure in a fight against racism because he doesn’t want to let go of his power, which is a clear indication that he doesn’t understand what role someone who is trying to atone from past acts and learn from their misdeeds can play in that fight. He’s asking for forgiveness but not willing to make any real sacrifice.

Men like Northam do have a place in this fight, but it is one of listening and learning and allyship, not–at least not at this stage of his growth–of leadership. To demand otherwise is just ego.