Back to the Future Musical London Zemeckis Spielberg | The Mary Sue

If My Calculations Are Correct, The Back to the Future Musical Is Going To Be Amazing 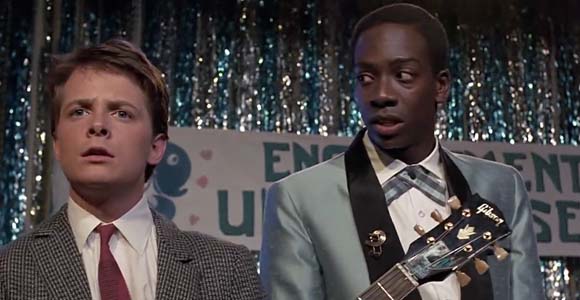 Apparently, a Back to the Future musical stage show has been in the works for the last decade. I suspect time travel.

According to the official Back to the Future website:

Robert Zemeckis and Bob Gale are currently working with Universal Stage Productions (Wicked and Billy Elliot), London-based producer Colin Ingram (Ghost – The Musical) and Steven Spielberg’s Amblin Entertainment to develop a stage musical version of their film Back to the Future. It will be produced with Donovan Mannato and CJ E&M.

But wait…we need to know important details, like, will Huey Lewis & the News be involved:

The new musical will have a book by Robert Zemeckis, Bob Gale and Jamie Lloyd, and new music and lyrics by Alan Silvestri and Glen Ballard, with additional music from the film by Huey Lewis & The News, Chuck Berry, Pat Ballard and Curtis Williams, including ‘The Power of Love’ and ‘Johnny B. Goode’. The production will be directed by Jamie Lloyd, with set and costume design by Soutra Gilmour, illusions by Paul Kieve, lighting design by Jon Clark, and musical supervision by Alan Williams. Andrew Willis will be skateboard consultant.

Skateboard consultant!!! This is going to be the coolest musical ever.

One of the other great things about this announcement is it reinforced Zemeckis’ stance of not doing any more Back to the Future films/remakes.

“The Back to the Future Musical is a project that Bob Zemeckis and I have been exploring for almost ten years. We’re thrilled to be at last in partnership with a creative and producing team that will create a show that is true to the spirit of the film without being a slavish remake,” said Gale. “With all of us working together, we know the integrity of the material will be preserved in a production that will be a wonderful companion to the Trilogy. We intend to use music from the movie along with brand new songs to make a version of Back to the Future that is fresh, entertaining, and takes advantage of all the amazing things that can now be done on stage. We can’t think of a better way to celebrate the 30th anniversary of the film.”

The musical is set to premiere in London (harumph.) sometime in 2015 before making it’s way to the US on Broadway (yah!). So. Daniel Radcliffe for Marty McFly? Make it happen, people.