We're comin' up on the end. 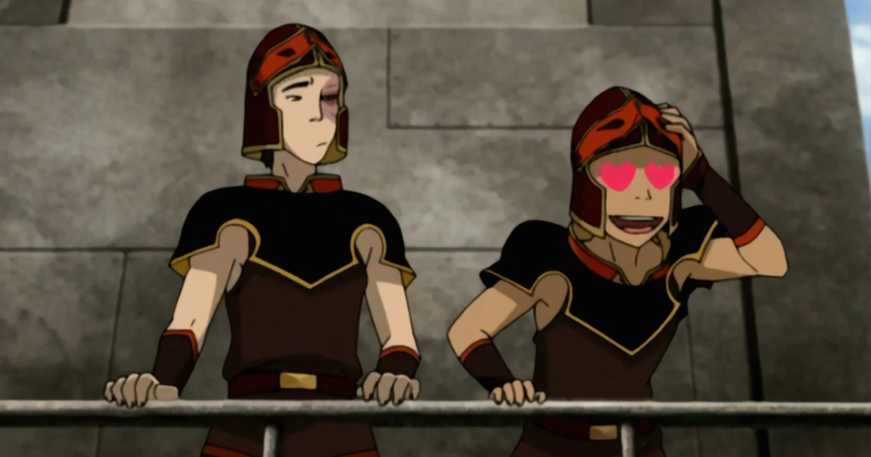 Zuko’s met up with the gaang, proven himself the most hilariously incompetent firebending master ever (until he wasn’t–love ya, Zukes), and now he gets a buddy episode with Sokka. The back half of Avatar‘s third season is the gift that keeps on giving.

Did you forget that Sokka’s dad was taken to prison after the failed Eclipse Day offensive? ‘Cause Sokka didn’t! After a brief scene of Zuko trying to win the gaang over with bad puns about tea–the dork has been let out of the bottle, and he cannot be contained e’er again!–Sokka grills him as to where the Fire Nation keeps prisoners of war. The answer ain’t pretty: It’s a high-security prison… on an island… in the middle of an ocean of boiling water… inside a volcano.

I fucking love the Fire Nation.

Sokka tries to play it cool like he’s not going to try some shit, but Zuko’s an expert on trying shit, so that night when Sokka tries to sneak away on Appa, Zuko’s already waiting there to intercept him.

With my newfound knowledge of dork Zuko, I have been blessed with the knowledge that he 100% definitely sat in this exact pose 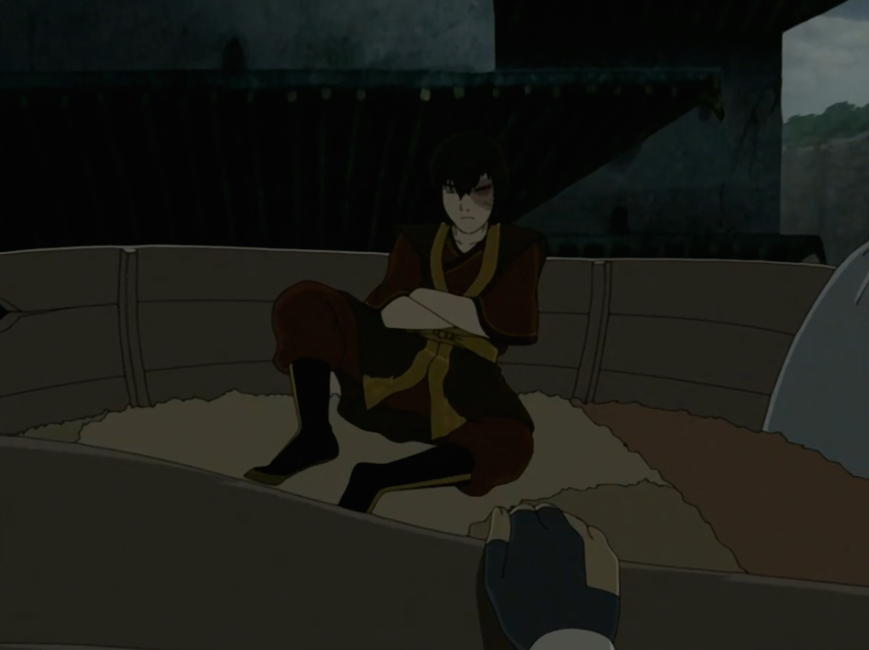 Zuko tries to convince Sokka not to go off and try to rescue his father, but Sokka plays the trump card: “It’s my fault he got captured. I have to go rescue him… for my honor!”

Zuko agrees to go with him, only they’ll take Zuko’s war balloon instead of Appa, because flying a living thing into a volcano is stupid, Sokka, God. I’m not quite sure why Sokka doesn’t want to get Katara, Aang, and Toph involved. Katara at least should be given the option. It’s her dad, too. And it’s not like “rescuing prisoners” is a goal that the others couldn’t be brought around to. I get that Sokka has a guilt complex and feels personally responsible for what’s happened, but he’s usually a pretty practical guy. Unless….

…oh God, he’s been around Aang and Zuko too much, and the angsty martyr complex is rubbing off on him. Run, Sokka, run!

They get to the Boiling Rock, where they proceed to crash and ruin the war balloon, because science. Also: The “My first girlfriend turned into the moon”/”That’s rough, buddy” exchange happened! And it was so much better than I’d hoped. I’d only seen gifsets of it, so I assumed Zuko’s “That’s rough, buddy” was him being awkward and having no clue what to say. But God bless everything: Dante Basco’s line reading is genuine commiseration with Sokka’s my-girl-turned-into-the-moon-plight. He feels it. He really does think it’s rough, buddy.

For being the ATLAverse version of Alcatraz (ATLAtraz), the Boiling Rock is pretty easy to insinuate yourself into as a fake guard, I guess because the warden figures no one would be able to get there in the first place. Zuko and Sokka learn a bit about the joint, like A) firebending’s forbidden, and those who do it are sent to “the cooler,” which is a literal cooler where it’s too cold to firebend. I appreciate the pun. B) No one’s ever escaped. C) The Warden is a jackass, and also Mai’s uncle. And D) Sokka’s dad isn’t there… but Suki is.

Sokka goes to Suki’s cell with the intention of busting her out. She tears up and kisses him instead of saying he’s too short for a prison guard, but you can’t win ‘em all. Things go wrong when a real-guard shows up, and tl;dr–Zuko is outed, and the Warden’s going to eventually turn him in to Ozai. For now, he and Suki are both prisoners. They have a meet-awkward (“You kind of burned down my village.” “Oh, sorry about that.”) while Sokka, still disguised as a guard, facepalms in the background. 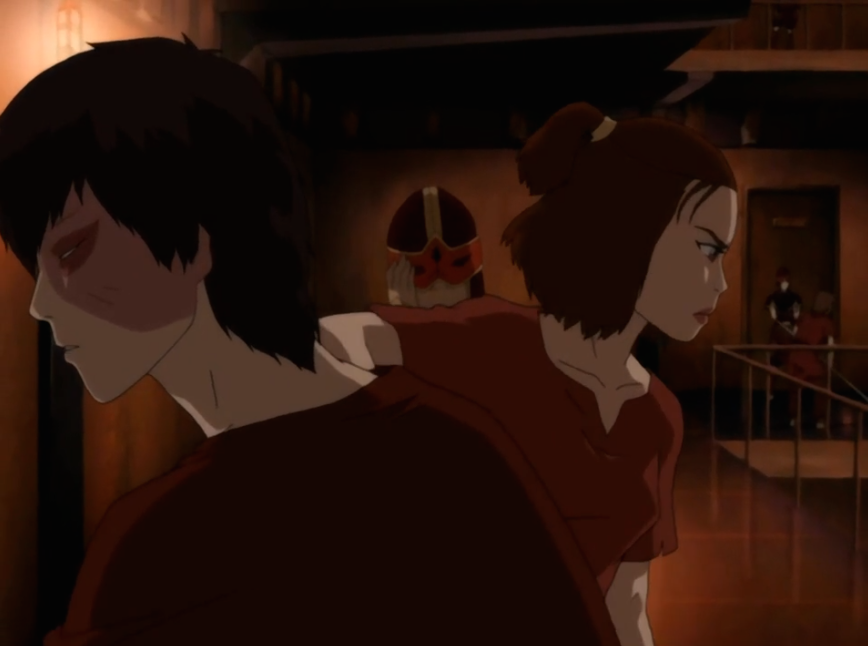 He comes up with a pretty clever plan that involves detaching a cooler from the rest of the prison and using it as an insulated boat to sail across the boiling sea. It almost works, too, except that Sokka, Zuko, and Suki find out at the last minute that more war prisoners will be arriving the next day. If they stay, they might get the chance to rescue Sokka’s father… or Sokka’s father might not be coming, and instead they will have blown their only chance at escape.

Sokka, paralyzed by the thought that he might fail and determined to quit while he’s ahead, decides to leave before the new prisoners alive. But Zuko talks him out of it, saying it’s human nature to fail, and you just have to keep trying. “I mean, look at how bad I was at catching the Avatar. Total failboat. I fucked that up so much. Ah, good times.”

Fellow prisoner Chit Sang takes the cooler canoe instead, but he gets captured, so now the prison’s on high alert with Zuko, Suki, and Sokka still inside. The episode ends with the arrival of the new prisoners. The writers draw it out for suspense–is Sokka’s father not there, meaning they screwed up their only chance at escape for nothing?–and for a minute I thought they’d go for a twist and have Iroh be the war prisoner. I really want Iroh to come back. Where is he? There are like seven episodes left; are we going to see him at all before the show ends?! I just want to know if he’s OK!