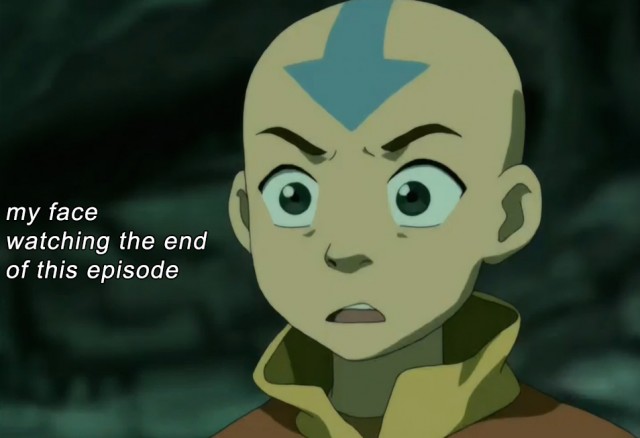 I AM SO ANGRY RIGHT NOW.

OK, I’m gonna get the elephant (or, given that it’s Avatar, the “flamingo elephant” or something) in the room out of the way first:

After a FULL SEASON of soul-searching, Zuko decides to go back to the Fire Nation.

I know he ends up with the Gaang eventually, and I’m sure it’s gonna have this great message like “no matter how many mistakes you make, you can always redeem yourself.” But right now? After that episode? I am S C R E A M I N G.

But let’s start with the recap. On their way back to Ba Sing Se, Aang and Sokka come across Toph, so that “being captured and separated from the rest of the group” thing resolved itself pretty quickly, eh? No complaints—Team Avatar has shit to do. Namely, rescuing Katara, whom Azula dumped in the crystal caves underneath the city. She gets a cellmate in Zuko, whose hippy dippy “everything is great with the world”ness ends preeeetty quickly when Azula pulls a “Surprise, bitch. Bet you thought you’d seen the last of me” and gets her new BFFS the Dai Lee to arrest him. 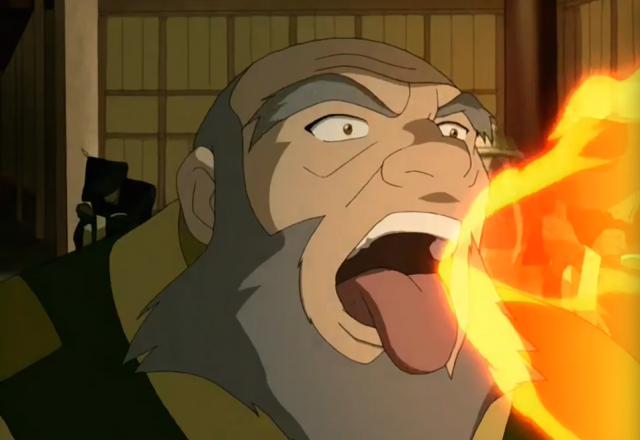 The fact that he can literally breathe fire makes his escape from Azula pretty easy. But Zuko refuses to follow, saying that he’d rather confront Azula once and for all than keep running from her. Cue Iroh’s literal facepalm at his nephew’s poor decision-making skills (the first of many times they will pop up this episode): 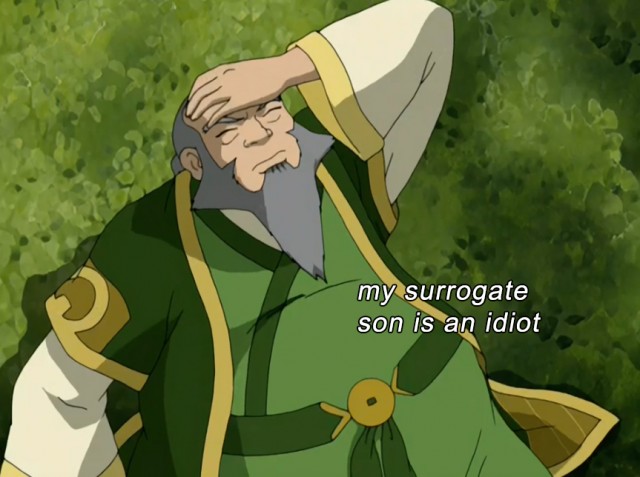 Then we get this brilliant exchange:

So the guards immobilize Zuko and take him away, because Azula’s too fucking smart to let herself get distracted by drama when she has a coup that needs pulling off.

Speaking of the coup: Aang, Toph, and Sokka don’t know yet that the visiting “Kyoshi Warriors” are actually Ozai’s Angels. The Earth King tells them that Katara must be in their old house, which of course she isn’t. While there, they get a visit from Iroh, who’s just decided “Hey, I’m gonna go to the Avatar and suggest that we work together to rescue Katara and Zuko.” And, because he’s Uncle Iroh, they are convinced as to the wisdom of this plan pretty quickly. All except Toph, who didn’t need any convincing, because she just knew Iroh as the guy who gave her good advice back in “The Chase.” 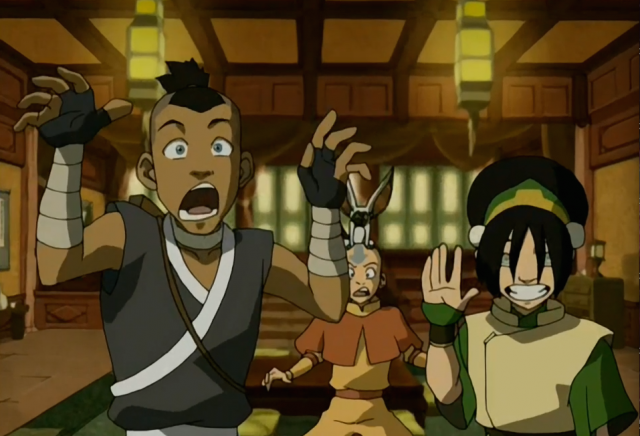 MEANWHILE, IN PRISON. Katara and Zuko end up bonding hardcore over all the ways in which the Fire Nation has dicked them both over. She’s even about to use her super-secret healing water to try and get rid of the scar on his face—the visible manifestation of the hold the Fire Nation has over him—when Aang and Iroh bust in to rescue them. And ohhh, remembering that water thing is gonna hurt me later. She was so willing to do it. They’re so close to friendship. So close.

While Iroh and Aang are on prisoner rescue duty, Sokka and Toph are hoofing it to the Earth King to tell him about Azula’s upcoming coup. Except the coup’s not so much “upcoming” as “literally happening right now.” Toph takes care of business in the ensuing fight scene with Ozai’s Angels, as is her wont, but when Azula gets her pocket-sized lighting bolt to the Earth King’s throat, they have to surrender. Long Feng then strides in, all convinced that he can get the Dai Lee to arrest Azula.

In one of my favorite scenes of the episode, Azula takes down Long Feng without lifting a finger—she just calmly explains to him that he’s a punk-ass brat and she’s TRUE QUEEN MATERIAL, and she’s already won this fight, so kindly bow down and pay your respects, motherfucker. And Long Feng does.

Azula’s coup now 100% successful, she goes to the crystal caves to ruin Zuko’s life just a liiiiiiiittle bit more. Iroh tells him: “You’re at the crossroads of your destiny. Choose good!” Azula tells him: “You can still redeem yourself. The Fire Nation needs you. We can rule together, and you can win back your honor and Dad will love you again. Choose evil!”

What the actual fuck, Zuko? What the actual fuck?! I was convinced all through the ensuing fight scene that it was all some sort of con, but no, he really did fall for it. It’s not even a good vs evil thing, at least not exclusively. It’s an “AZULA ALWAYS LIES. SHE IS PLAYING YOU, OH MY GOD, SHE IS PLAYING YOU” thing. She tried this exact same “come home with me and dad will love you” tactic in the season finale, and he fell for it then. And now?! After everything? AGAIN?!?!?

God damned honor. Zuko could get an email from a “Nigerian prince” offering to restore his honor in exchange for his entire life saving’s and left kidney, and Zuko would fucking fall for it. Why do I always fall for characters who make awful decisions all the time? First THIS FUCKER: 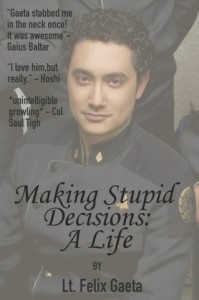 And now THAT FUCKER: 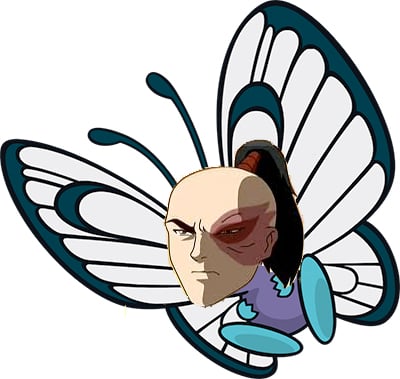 Why? Why do I do this to myself?

So then the big fight happens. Zuko and Azula vs Katara and Aang. The only way Aang has even a shot at winning is if he enters the Avatar state, which means he has to let his “worldly attachment” to Katara go. He does, but then immediately once he’s in Avatar state, Azula zaps him with lighting. Cue Katara all:

OK, she’s not actually like that. She’s more concerned with saving Aang than killing Azula. But that’s Katara’s voice actress in the gif. I have been holding onto that for TWO WHOLE SEASONS, guys. You don’t even know.

Then! Deus ex Iroh! He shows up and gives Katara enough time to run off with an unconscious Aang (or maybe dead? If he dies in the Avatar state, there are no more Avatars, but we have a whole third season, so that’s not gonna happen). To do that, he has to fight Azula and Zuko. I’ll let my notes speak for themselves:

We don’t see how that fight ends, but presumably Iroh gets captured. Anyway. Katara, Aang, Toph, Sokka, and the Earth King ride away from the city on Appa. What, you thought Toph and Sokka were going to stay imprisoned? She’s a metalbender now. Katara uses the water she was going to use on Zuko’s scar (sobbing) to bring Aang back to life. They’re all alive, but the Earth Kingdom has fallen, and now I think Azula knows that they know about the solar eclipse and how it negates firebenders’ powers?

I don’t care about that right now. I care about Zuko. He expresses discomfort at betraying Iroh (as well you should) and doubt about the fact that he didn’t capture the Avatar. Will dad still restore his honor? Psssht, Azula responds, It doesn’t matter. You restored your OWN honor. 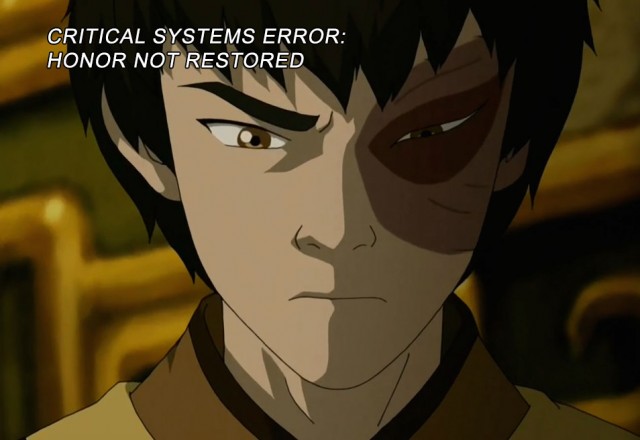 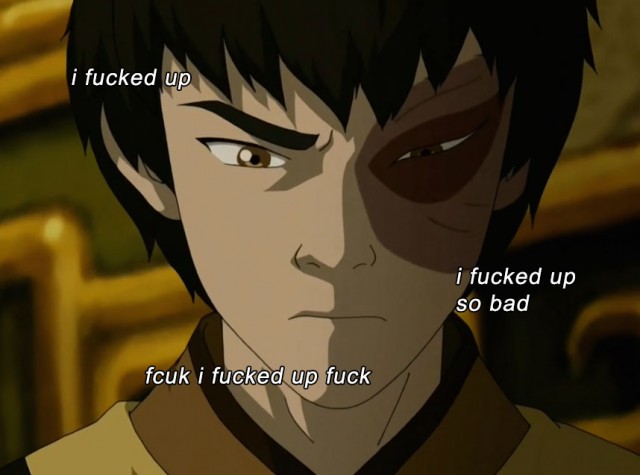 And that’s it for season two, my friends. And, sadly, for my Avatar recaps in their current state, as this is my last day at The Mary Sue [Editor’s Note: *gross sobbing*]. I’m moving on to Film Journal International, and I’ll still be around writing articles twice weekly at Pajiba. As for these recaps, I still plan on doing season three on my currently sorta-defunct personal site. I can’t guarantee it’ll still be one recap a week, but I promise you, I will finish out the third and final season of Avatar, even though after that finale I kind of want to mainline the entire rest of the show without taking notes or anything. Whatever I end up doing and whenever I end up doing it, I’ll post about it on Twitter, so you can follow me there to keep up.

I’m leaving comments on intentionally this time, instead of meaning to turn them off and then forgetting. Just don’t go mad with season three spoilers. I trust you. With my Avatar newbie recaps and BSG before them, I say from the bottom of my heart: It’s been real. Have a gif of Humphrey Bogart falling over a chair: