A Living Planet: Avalanches on Mars 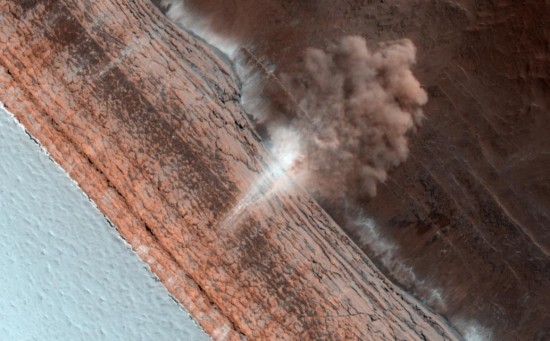 We usually think of the other planets in our solar system as relatively peaceful, unchanging.  It’s sort of a “tree falls in the forest” situation.  If there’s no life, how active can they really be?  The storm on Jupiter is a swirling maelstrom, sure, but it’s a swirling maelstrom that’s been around for over two hundred years.

And yet… spring is approaching the northern hemisphere of Mars, thawing the carbon dioxide ice that’s built up along cliff faces.  And when you get thawing ice on cliff faces, you also get…

The above, ludicrously high-rez, picture was taken by the Mars Reconnaissance Orbiter, probably within a minute of the avalanche’s beginning.  According to Discover‘s Bad Astronomy blog,this is probably caused the the carbon dioxide ice sublimating: going directly from a solid state to a gas.

To be honest, it’s not completely sure that the sublimation (the change from solid directly to gas) of carbon dioxide is causing these avalanches, but it does seem the most likely explanation. Whether it’s dry ice or not, what this shows us directly is that Mars is still an active place. Certainly the surface is undergoing continual (if small scale) modification, with avalanches, meteor strikes, and other processes still occurring even, literally, today.