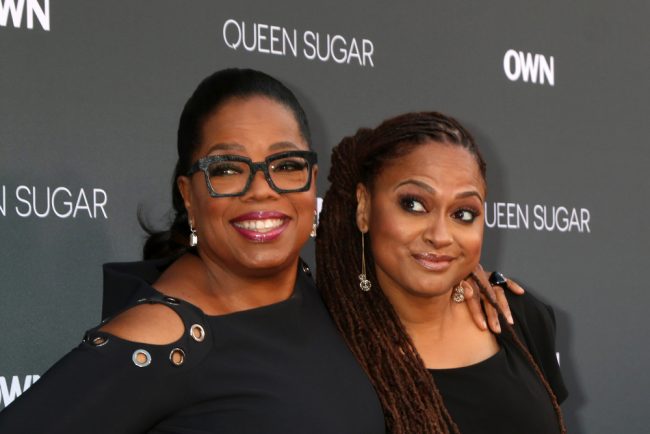 Director Ava Duvernay unleashed a Twitterstorm of squee today, with awesome cast and crew photos from the set of A Wrinkle In Time. Principal photography wrapped today, so Duvernay posted tributes to her colleagues as well as this amazing image:

She paid tribute to the crew as well as the cast.

Thanks to the truly beautiful crew of WRINKLE IN TIME and our studio for standing with me every step of the way. Extraordinary experience. pic.twitter.com/1Zyxg39fgO

She also tweeted about the talent and personality of star Storm Reid, who plays protagonist Meg Murry. Duvernay said that Reid is “our hero” and “one of the most formidable actors I’ve worked with.”

The great @StormReid is Meg. She does it all. Happiness. Heartbreak. Action. Emotion. And w/ grace. Our hero. In the story. And on the set. pic.twitter.com/dKYcDW6B76

That’s a wrap on @StormReid. Hands down, one of the most formidable actors I’ve worked with. The world will know her name. Love you, @Storm. pic.twitter.com/xM2FiOywaH

In addition, Duvernay posted tributes to other cast members, including Levi Zane Miller, Andre Holland, Rowan Blanchard and Deric McCabe. And of course she called out her Mrs. Who, Mrs. Which, and Mrs. Whatsit.

That’s a wrap on @Oprah for WRINKLE! Gosh, we had fun. My great friend. Her role as MRS. WHICH is literally out of this world. Thanks, OW. 💛 pic.twitter.com/dk1KuGyw1F

That’s a wrap on @RWitherspoon! She blew me away everyday with her tremendous talent. But more than that, w/ her kindness. Thanks, Reese! 💛 pic.twitter.com/BPCsvoOdKJ

That’s a wrap on @MindyKaling! She was the very first WRINKLE casting idea I had. So grateful she said yes! Thanks, Mindy! Love to you! 💛 pic.twitter.com/RoCIQukc2G

Lastly, she posted photos like this that made the film look like a project of pure joy.

Principal photography for WRINKLE IN TIME wrapped last night! An epic adventure. I loved each and every minute. xo! pic.twitter.com/D3z5J6KBIz

Directed by Ava Duvernay from a script by Jennifer Lee, and based on the beloved books by Madeleine L’Engle, A Wrinkle in Time is due in theaters on April 6, 2018.

(Via Deadline; image via Shutterstock)