Augmented Reality Shirts, The Newest Way To Make People Stare At Your Chest 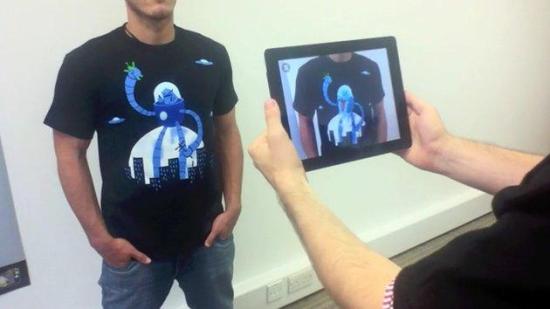 Now that most of us carry around touchscreen devices with cameras, it seems only natural that augmented reality becomes more prevalent in everyday life. There are AR dressing rooms, AR tattoos, AR translator software, and like all good technology, AR is now making its way into the apparel business. Zappar and Hybrid Apparel have teamed up to make Zapparel, a line of clothing that features AR amusements.

Take your standard iOS or Android device, install the Zapparel app, point the thing at someone’s chest, and you’ll instantly have access to a digital triviality of some sort or another. In the case featured above, it’s a simple little game. Now, it’s cool seeing this technology become more pervasive, but the AR — while amusing — is still pretty inconsequential, not to mention potentially awkward. It seems that the user has to keep the camera trained on the wearer and that the wearer has to stand still, resulting in a weird little stand off.

The AR gaming also appears to be entirely one-sided in that the device wielder just plays while the shirt-wearer contemplates life as a billboard. This kind of one-sided shirt interaction has been seen before, however. Remember “say the color and not the word” shirts? At least in those situations the wearer had a chance to laugh at you, where here, they can’t possibly see your screen and be wearing the shirt.

Nevertheless, it’s interesting to see AR taken in yet another new direction where there is some nifty potential. Perhaps more games could be developed to involve the wearer, maybe something where you get points until the the wearer covers up the image. Of course, that might just be encouraging sketchy behavior. Still, these games are a neat gimmick and sooner or later, someone is bound to start making short-shorts with AR codes on the back so you can say “I was just trying to play the game!” instead of “I was just trying to read what it said!”