AT&T-TMobile Merger - How To Complain | The Mary Sue 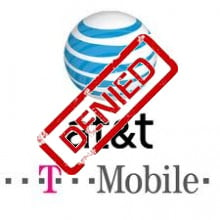 Yesterday’s news that AT&T plans to acquire T-Mobile for $39 billion sent shockwaves through the mobile phone-owning populace, and based on our informal Internet sentiment analysis following the deal, a lot of people are unhappy about it. Many T-Mobile customers don’t want to go over to AT&T, and web freedom advocates dislike AT&T’s complicity in sweeping NSA surveillance programs.

And cell phone owners on all networks have plenty to fear about an America in which there are only three relevant carriers, and one, AT&T-Mo (our coinage, not theirs) essentially has a monopoly on GSM technology in the U.S.

The acquisition is not a done deal yet, but its opponents who simply assume that it would be open-and-shut antitrust may be in for a rude surprise. Former telecom regulator Bruce Gottlieb warns that while some Democrats will almost certainly oppose the merger, AT&T “is the best there is” in the Machiavellian world of Washington lobbying and dealmaking, the White House is unlikely to want to appear anti-business pre-2012 election, and T-Mobile’s ownership by a German company, Deutsche Telekom, makes it far from a favorite in D.C.

Still, since it will ultimately be up to the FCC and the Department of Justice to decide on the deal, citizen input does actually matter here. As much fun as complaining about the deal in Slashdot comment threads may be, here’s how to make sure your thoughts on the deal are heard:

The FCC: According to GigaOM, the FCC has not yet opened a docket on the proposed acquisition; however, any comments on the subject addressed to [email protected] “will be held until the docket is opened and then added to the record.” The FCC can also be reached by phone at 1-888-CALL-FCC or 1-202-418-1000.

The Department of Justice: The DoJ can be reached at [email protected], and they provide a guide to filing a complaint on their site. They can be reached by phone at 1-202-307-2040.

Congress: While Congress doesn’t have direct authority to decide on the deal, it will be holding hearings that could make a difference: Gottlieb writes that “Congress, via its oversight authority, [will be] looking over everyone’s shoulder as well.” You can find your Congressperson’s contact information at this site [Representative] or this one [Senate].