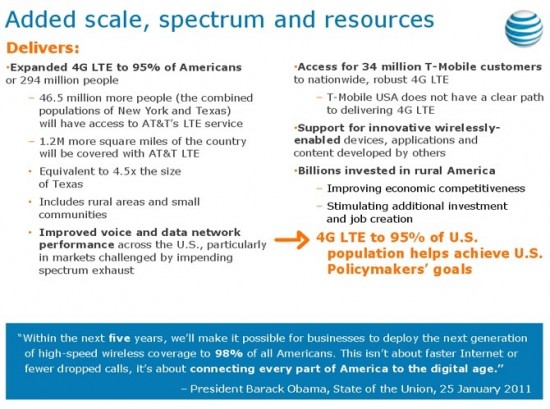 AT&T and Deutsche Telekom have come upon an agreement wherein AT&T will buy T-Mobile USA for $39 billion ($14 billion of it in stock), gobbling up the mobile service that people generally used when AT&T or Verizon didn’t tickle their fancy. The combined user base of the newlook AT&T is estimated to be around 130 million people, though seeing as how this merger will create what is essentially a monopoly on GSM in the United States, the merger will have to pass through various regulatory checks. From The Hill:

The transaction will require Justice Department scrutiny on antitrust grounds and FCC public interest approval due to the transfer of spectrum licenses. Observers will watch for conditions ranging from broadband deployment to low-cost subscriptions to net neutrality.

The door is open for the merger to be entirely blocked, and many Democrats on Capitol Hill can be expected to make that case.

If the deal doesn’t pass for whatever reason, AT&T will owe T-Mobile a $3 billion breakup fee, as well as giving T-Mobile some of their AWS spectrum, and granting T-Mobile a roaming agreement on which both parties agree.

Why would AT&T buy up T-Mobile, aside from it being a savvy business move? They claim it will provide an expanded LTE footprint. Also, it’s a savvy business move. There isn’t word yet regarding how this merger will affect current T-Mobile customers, though hopefully they’ll be able to keep their current plans, as well as not succumb to AT&T’s notoriously subpar service.

(via Engadget and The Hill)