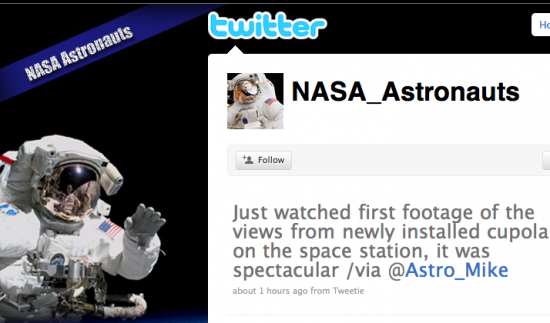 Even if you’re not a Twitter nut, astronauts are some of the most worthwhile people you can follow on Twitter. Let’s face it: while they’re interesting people in their own right, being able to send never-before-seen pictures directly from space is a pretty good way to get popular fast.

Though you could track them down yourself, we thought it’d be helpful to compile a list of astronauts on Twitter who are currently active:

@NASA_Astronauts is the best place to start: if you’re going to follow one astronaut account, that’s the one. It regularly retweets some of the best tweets and Twitpics from the other astronauts (even in Japanese).

But if you want to break it down further or express your rabid Soichi Noguchi fandom, look no further than @NASA_Astronaut’s 17-person strong following list. When applicable, we’ve linked their NASA bios as well as their Twitter accounts.