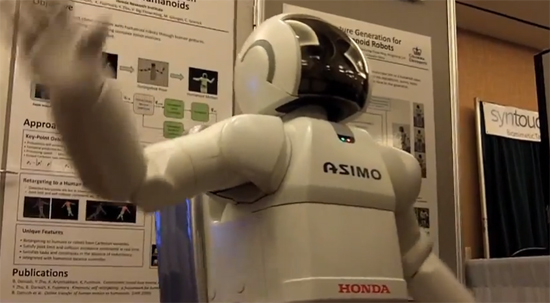 Asimo, everyone’s favorite humanoid robot from Honda, has learned a few new tricks that researchers hope will make interacting with robots a little bit easier. The first is a new system that adds gesticulations to pre-programmed speech on the fly. Engineers working with Asimo say that since the robot lacks a mouth, the only way Asimo can interact with people is through speech and body movements. Interestingly, the user can define how expressive the robot should be while speaking, so Asimo can move with the grace and tenacity of a master orator or with more subdued motions.

Second, and perhaps more significantly, Asimo can now mimic the motions of a human through a Kinect motion controller. This isn’t mere copying, though; the movements are tightly integrated to Asimo’s existing systems, allowing the robot to adjust his feet to keep him upright while following human movement. For professional breakdancers concerned about ceding dancing to the robots: Don’t worry, engineers say that this input method will allow humans to easily teach movements into Asimo, without tediously programming each movement to each joint.

Read on below for a video of the plucky robot in action.