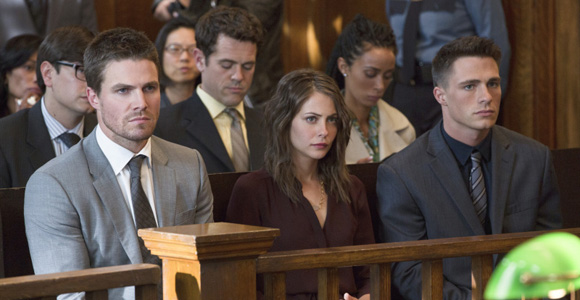 Everyone put on your serious faces – it’s time for a murder trial!

We begin this week’s episode with a flashback, but not the usual kind. This one is just six months ago during Moira’s press conference. While the earthquake is about to hit, the guards at Iron Heights prison decide to evacuate but leave the inmates behind. Lucky for him, Count Vertigo’s cell gets hit in such a way as to open the door. He takes keys from a fallen guard and passes by several other inmates until he decides to release just the Dollmaker. So that’s how that went down.

Back in current time, it’s finally trial day for Moira. Laurel has a chat with her boss, Adam Donner, who reveals he’s got an ace up his sleeve. But he’s not sharing it with his co-chair because…because…because we want to have a shocking reveal later, OK? As Thea and Oliver enter the courthouse, hounded by the press, Diggle looks to be ill. Oliver tells him to go home, there are plenty of cops here to protect him, and oh, I’m also the vigilante so take a nap or something.

We’re hit over the head with another Star Labs particle accelerator story on the news while Diggle goes down at the Queen offices. He manages to get out, “Not the flu,” to Felicity who eventually gets him to the Arrow Lair somehow. Oliver shows up and finds out she sent a sample of Diggle’s blood out and it came back positive for trace amounts of vertigo. They realize prison officials covered up a lot about the earthquake but he maintains he made the right choice not to kill Vertigo when he had the chance. He also happens to have an arrow with a drug to counteract vertigo on hand but that’s probably not going to do much good considering Vertigo enlisted the help of a doctor to cook up a different version of the drug.

Thea on the stand and is grilled by Adam about how long it took her to visit her mom. “It was complicated,” says Thea honestly and I wonder how this is relevant exactly. “You blamed your mother, why shouldn’t the jury?” he says. Because the jury is there to go on facts and Thea is a strong-willed teenager? Just a thought. Regardless, this line of questioning is done – Adam seems to fall ill to the effects of vertigo as well. He’s taken out of the courtroom by medics but uh oh! Vertigo is driving the ambulance. Moira’s lawyer admits Thea’s testimony was a setback, “She was supposed to humanize you.”

Back at the Arrow Lair, Diggle is still not doing well and they finally realize the vertigo recipe must be different. And then Count Vertigo takes over the news, showing he has Adam hostage. He explains many in the city are sick but that he has the cure, you just have to go to your neighborhood vertigo dealer and pay market price for it. He makes Adam ask for it, gives him the antidote, but doesn’t actually show him being ok, which is a poor marketing strategy if ever I saw one. The team is trying to find out where he was broadcasting from while also trying to figure out what only certain people consumed in order to ingest the drug. 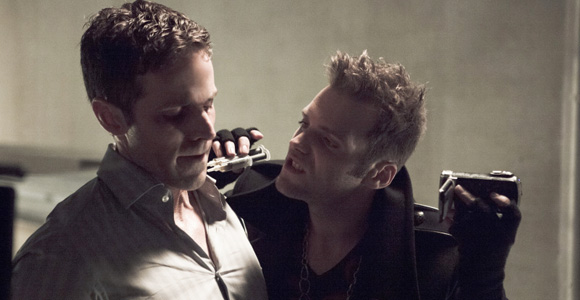 Sebastian Blood is hanging out at the district attorney’s office, where they’re also all following the news. A woman tells Laurel she’s now lead on the trial. “But Ms. Spencer”…AAAAHHH IT’S KATE SPENCER, SHE’S DISTRICT ATTORNEY! [Edit: Apparently I completely glossed over her last appearance.] Anyway, you’re doing the trial even though this is still a gross conflict of interest for you, so study up.  Meanwhile, Thea is sulking at Verdant when Roy decides to help her feel better by letting her punch him. Because when you’re angry, hit something! And why hit a punching bag when you can hit your boyfriend!

There’s a break in the Vertigo case when Felicity manages to grab a reflection of the city’s seal in Adam’s eye. Oliver heads off to the Starling Municipal Records Department to free him and hopefully capture Vertigo. But there’s actually lots of people there working on the drug so when Arrow drops in, it’s not to easy to hit Vertigo. Though I’m not sure why, Oliver has made tougher shots but Vertigo isn’t worried because he’s heard Arrow has “developed an allergy to killing.” Well I guess that’s out. So there’s no real threat and Arrow decides to shoot some flammable equipment instead.

While studying up on the case, Laurel finds the big secret Adam was keeping from her and goes to visit Moira in prison. “I could be disbarred for speaking to you but this isn’t something for lawyers,” she says, “This is a family matter.” She shows Moira the file without speaking the secret out loud but pleads with Moira not to make her use it by taking the stand. Instead, Moira calls a family meeting and explains she has to testify. Thea blames herself but she says shut up, I have something important to say I could have said weeks ago when you asked me about my secret. “Years ago, your father was having affairs, and I had a moment of weakness. I cheated on him with Malcolm Merlyn.”

You jerk, I asked you that last year, complains Thea. Well anywho…back to the trial. Laurel cross examines Moira, asking her why Merlyn didn’t kill Walter when he so easily killed her first husband. “I convinced Malcolm not to,” she says stupidly. “Oh, so you really weren’t in as much danger as you’d like us to believe, you were just afraid of getting caught,” replies Laurel. And also you guys had sex so there’s no way he’d kill you or your children. Ummm… After all this, Oliver just wanted to ask Laurel if she was ok but she flips out. “How can you forgive me after what I just did in there? I don’t understand how anyone could.”

Felicity has the victims mapped and they seem random but a pattern immerges once Diggle suggests she place markers on their jobs instead. Ah! There were roving flu shot trucks recently. Felicity says she’ll go find one to grab the tainted vaccine but Vertigo finds her there. He winds up giving Oliver a call at the courthouse on his cell, which is weird because how would he know Oliver’s identity? Felicity certainly wouldn’t have given it up. Turns out, Vertigo found her Queen Consolidated badge, remembered Oliver’s name from that time he was buying vertigo from him just before The Hood caught him. And lol, what a coincidence, you must be Arrow.

Felicity is tied up and terrified at the office as Arrow comes in without his hood. Vertigo gives us some exposition about how he really dislikes him but someone else dislikes him more and that someone has money and set him up with his new drug operation to draw him out and kill him. When that doesn’t go exactly as planned, he threatens Felicity with a vertigo injection and she tells Oliver, “not for me,” when she realizes he might kill him to save her. Oh, he killed him. With three arrows. And then he falls out of the window. And onto a cab.

Just when the cops were getting to like you.

Back at the courthouse, Oliver says Thea will find out on the news what happened at Queen Consolidated as she complains about him not being there for the possible verdict, which hasn’t actually come back yet. Oh wait, jury is back. Great timing, you guys! And Moira is not guilty of all charges. Did someone bribe the jury because I definitely would have convicted her of at least something. Oliver agrees, she should have lost and it doesn’t make sense. But all’s well that ends well, Diggle is better, and Queen Consolidated Applied Scientists Division was able to create a non-addictive treatment for all those affected with vertigo. Felicity says, “I’m sorry I got myself into trouble again and you had to kill.” He says, “There was no choice to make.” NOW KISS. Except they don’t.

Our flashbacks this week have everyone back on the island. Ivo’s crew looks into the plane once and decides Shado and Slade aren’t there but throw in a bomb for good measure. Luckily Shado knew how to disarm it. Later the two save Oliver just after we find out Ivo is looking for the hosen. Turns out it has the coordinates to the Japanese sub they’re looking for. Oliver grabs Sara as they make their big escape and she explains that what’s on the sub will save the human race. Ok then.

Everything back at home unravels for us as Sebastian explains how he was the one who arranged Vertigo to take out Arrow. One of his bad cops tells him there’s been a development – one of the “Brothers” has survived and feels stronger. At the courthouse, Moira exits and is taken to a deserted parking lot. Her driver says he was instructed not to take her home and hey, Malcolm Merlyn is alive and well and kills the driver for good measure. “There are parts of the world where death is an illusion,” he tells her, “I learned to be convincing.” And oh yeah, I returned because you needed my help bribing (or threatening, it’s not clear) the jury. He’s also pissed she was lying about their relationship and decided to order a genetics test. “Thea is my daughter,” he says. Congratulations, sir. Did Moira know?

Well that was a pretty great episode, no? Last year around this time we heard Kate Spencer would be joining the cast but it wasn’t clear in what capacity. Right now, she could just be the DA and never progress to her superhero persona of Manhunter, much like lawyer Jean Loring probably won’t turn into Eclipso. My only issue with the episode was the bit about Vertigo guessing Oliver’s secret. I mean, I know I complain about Oliver telling everyone his secret and actually not hiding his appearance all that well (soon to be resolved with a real mask) but villains really shouldn’t be able to guess it that easily. Regardless, this was a strong episode that really furthers the plot. With Moira’s sort of newfound honesty with her children, I’m curious to see if she’ll confess Merlyn is back immediately. It would be the smart thing to do, which probably means she won’t. But yah! John Barrowman is back!!

What did you think of the episode this week?