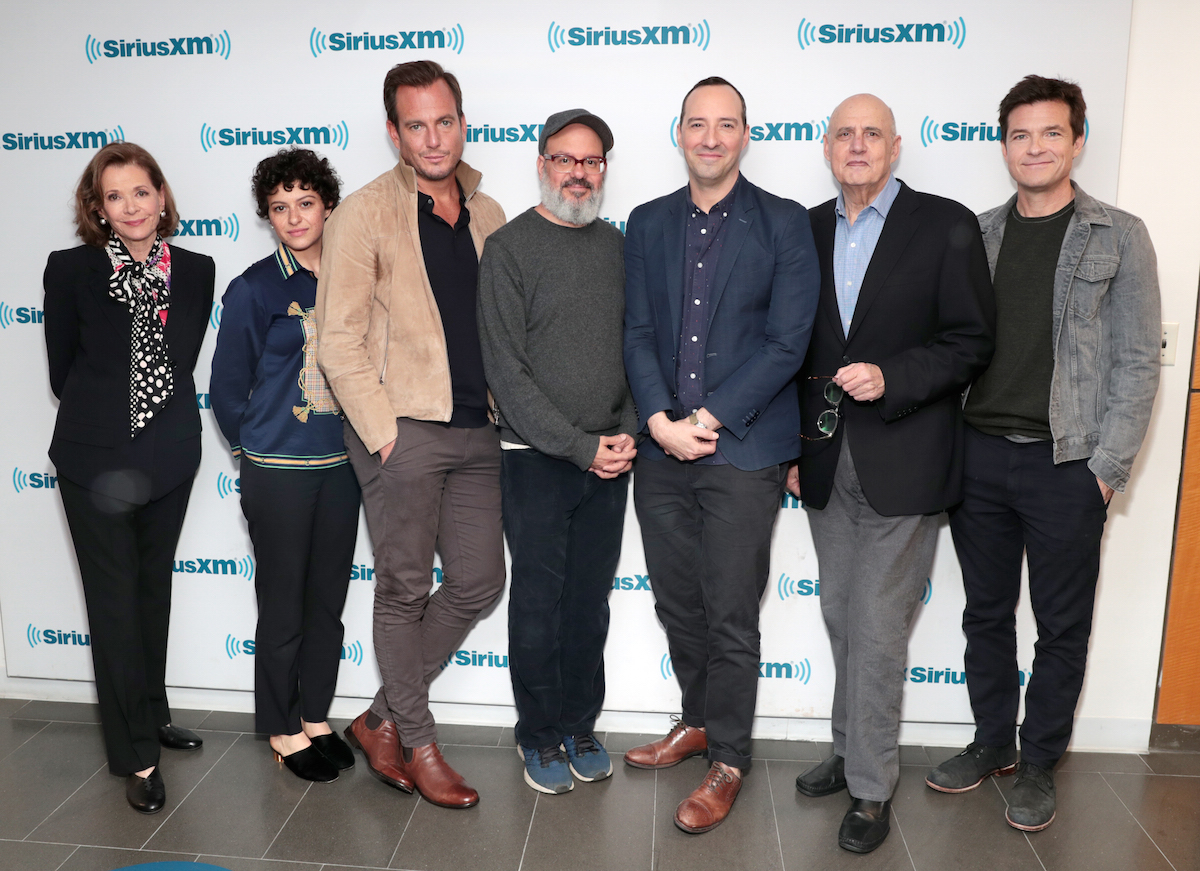 The cast of Arrested Development is currently doing the promotional rounds for the new season of the show on Netflix, but given Tambor’s recent firing from Transparent over allegations of sexual harassment, questions regarding his on-set behavior on both shows were bound to come up. In a recent interview between the New York Times and much of the cast, Tambor called these questions a “distraction.” Unfortunately, and unsurprisingly, his male castmates seemed, largely, to agree.

In what NYT’s Sopan Deb described as “a freewheeling, at times emotional conversation that had the air of a family Thanksgiving dinner,” Jessica Walter (Lucille Bluth) made note early on that “there’s so much testosterone in this room.”

While that reads as a joke, the truth of it is clear in the interview. It wasn’t just in how much the men dominated the conversation word-count wise, though they did. (The interview was comprised of edited excerpts, so the full conversation could have been more balanced. Alia Shawkat, who barely speaks at all in the interview as published, definitely had at least one interesting excerpt cut.)

The interview starts to get incredibly uncomfortable when Deb asks about the Transparent allegations. It’s not uncomfortable because of what’s being asked, but rather because it reads as if two separate conversations are happening. One in which Walter (and Shawkat, briefly) is trying to engage directly with the subject, and one where the men present are dismissing it.

It starts when Deb askes Tambor, “if there’s another season, do you expect to be a part of it?” Tambor says he would hope so, while Bateman interjects multiple times, saying he wouldn’t do the show without Jeffrey and that “there’s no reason he shouldn’t” be in another season.

Many of the show’s men–Bateman, David Cross, and creator Mitch Hurwitz, most notably–have made it clear that they don’t think much of the accusations of sexual harassment made against Tambor. Interestingly, though, that’s barely even discussed here. Instead, Deb chooses to ask about Tambor’s recent interview with The Hollywood Reporter, in which he admitted yelling at directors, assistant directors, and even Jill Soloway. He also mentioned a “blowup” with Jessica Walter while filming Arrested Development, something she hadn’t spoken about before. But it’s Bateman, not Tambor, that responds.

BATEMAN: Which we’ve all done, by the way.

BATEMAN: Not to belittle what happened.

BATEMAN: But this is a family and families, you know, have love, laughter, arguments — again, not to belittle it, but a lot of stuff happens in 15 years. I know nothing about “Transparent” but I do know a lot about “Arrested Development.” And I can say that no matter what anybody in this room has ever done — and we’ve all done a lot, with each other, for each other, against each other — I wouldn’t trade it for the world and I have zero complaints.

The conversation starts to move on, with Arnett and Cross jumping in, before Walter makes them back up, asking Deb directly, “What was your point about that, though?”

NYT: If someone approached you and said, “O.K., here’s an actor that admits he routinely yells at directors, at assistant directors, at co-workers, assistants,” would you hire that person?

TAMBOR: I would hire that person if that person said, you know, “I’ve reckoned with this.”

Well, that’s a pretty easy answer to give when you’re the hypothetical in question. Bateman, unprovoked, once again jumps in. “Again, not to belittle it or excuse it or anything,” he says, and then proceeds to belittle all complaints that have made against Tambor. He talks about “context” and the “amorphous process” of acting and how “difficult” people are so common in this industry. I cannot express how poorly Bateman comes off in this interview.

Here’s the heart of the conversation:

BATEMAN: [Acting is] a weird thing, and it is a breeding ground for atypical behavior and certain people have certain processes.

SHAWKAT: But that doesn’t mean it’s acceptable. And the point is that things are changing, and people need to respect each other differently.

WALTER [THROUGH TEARS]: Let me just say one thing that I just realized in this conversation. I have to let go of being angry at him. He never crossed the line on our show, with any, you know, sexual whatever. Verbally, yes, he harassed me, but he did apologize. I have to let it go. [Turns to Tambor.] And I have to give you a chance to, you know, for us to be friends again.

WALTER: But it’s hard because honestly — Jason says this happens all the time. In like almost 60 years of working, I’ve never had anybody yell at me like that on a set. And it’s hard to deal with, but I’m over it now. I just let it go right here, for The New York Times.

BATEMAN: She didn’t give it up for anybody else.

HALE: But I will say, to Jason’s point, we can be honest about the fact that — and not to build a thing — we’ve all had moments.

HALE: Not like that. But I’m saying we’ve worked together 15 years, there has been other points of anger coming out.

BATEMAN: Exactly. Again, there is context. What we do for a living is not normal, and therefore the process is not normal sometimes, and to expect it to be normal is to not understand what happens on set. Again, not to excuse it, Alia, but to be surprised by people having a wobbly route to their goal, their process — it’s very rarely predictable. All I can say, personally, is I have never learned more from an actor that I’ve worked with than Jeffrey Tambor. And I consider him one of my favorite, most valued people in my life.

The NYT has released audio of part of that exchange, and it’s honestly pretty difficult to listen to. As Bateman continually interjects to explain why Walter’s own experiences weren’t as bad as she thinks, and as the other men in the cast rush to back him up, to find ways to explain and normalize abusive behavior so they can wrap that conversation up and put it behind them, they are totally ignoring the fact that Walter–a woman who has been a professional actor longer than Bateman has been alive–is actually trying to work through her feelings in order to be able to do just that.

The whole thing reads and sounds like kids trying to deflect and distract from their parents’ fighting. Except these aren’t kids. They’re grown men, refusing to acknowledge the severity of the abuse present not just in their industry, but on their set.

Here’s audio of Jessica Walter CRYING, standing up for herself after all the men in the AD cast try to gaslight her into thinking Tambor’s harassment isn’t THAT bad. This is horrific. pic.twitter.com/innJv8LIYF

Walter is trying to have a very specific conversation head-on, while her male colleagues insist on talking around the issue at hand. It’s incredibly frustrating to read and listen to, and will likely feel familiar to many women who don’t have to have been in this exact situation to know what it feels like to have your feelings minimized and explained to you, to see people work so hard to maintain the status quo when all you want is a simple acknowledgement of your reality. The way Walter refuses to back down is inspiring–as is Alia Shawkat, standing her ground in a room of older male colleagues–but it’s disheartening to see these men ignore and dismiss her, clearly not even realizing that that’s what they’re doing.

Bateman, for his part, issued an apology late last night. (As did Tony Hale.) In a series of tweets, he wrote:

Based on listening to the NYT interview and hearing people’s thoughts online, I realize that I was wrong here. I sound like I’m condoning yelling at work. I do not. It sounds like I’m excusing Jeffery. I do not. It sounds like I’m insensitive to Jessica. I am not. In fact, I’m horrified that I wasn’t more aware of how this incident affected her. I was so eager to let Jeffrey know that he was supported in his attempt to learn, grow and apologize that I completely underestimated the feelings of the victim, another person I deeply love – and she was sitting right there! I’m incredibly embarrassed and deeply sorry to have done that to Jessica. This is a big learning moment for me. I shouldn’t have tried so hard to mansplain, or fix a fight, or make everything okay. I should’ve focused more on what the most important part of it all is – there’s never any excuse for abuse, in any form, from any gender. And, the victim’s voice needs to be heard and respected. Period. I didn’t say that and instead said a bunch of other stuff and not very well. I deeply, and sincerely, apologize.

This apology is … fine. It’s frustrating to see Bateman claim that he just sounded like he was condoning and excusing Tambor’s behavior. He was doing those things. He was being insensitive to Walter and whether he was cognizant of it at the moment or not, he was working hard to silence her as she tried to speak about the verbal harassment she experienced. When we talk about ending systemic harassment and abuse, it’s not just the abusers that have to change. It’s also those who are complicit in maintaining an environment that doesn’t allow women to speak out when abuse happens. And that’s exactly what Bateman was doing here.

Anyway, I’m glad Bateman has had a “learning moment,” and I hope that’s genuine and not just a PR scramble, but it sure would be nice if every man didn’t have to go through their own individual public embarrassment to learn how to listen to women.