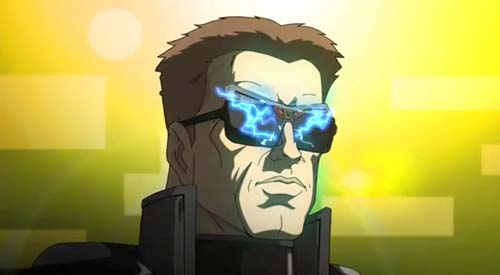 To the surprise of no one, Arnold Schwarzenegger has stopped pursuing his reignited entertainment career while he deals with his troubled marriage and the revelations that he fathered a child with his former housekeeper. Several new projects had been lined up including a film and the one we were the most psyched about/dreading, the animated Stan Lee collaboration, The Governator.

Before his separation from Maria Shriver was announced, Schwarzenegger was ready to embark on his acting career’s second wind after serving two terms as California’s governor. In addition to The Governator, he was set to star in Cry Macho, which was supposed to start filming in August. Producers have been trying to bring this story, which was adapted from a novel of the same name, to the big screen since 1975. However, unless they decide to recast the story, they might have to wait a bit longer.

[Schwarzenegger’s] lawyer, Patrick Knapp, said in a statement that at Mr. Schwarzenegger’s request “we asked Creative Artists Agency to inform all his motion picture projects currently underway or being negotiated to stop planning until further notice. Governor Schwarzenegger is focusing on personal matters and is not willing to commit to any production schedules or timelines.”

He went on to say that these projects may resume “when Governor Schwarzenegger decides.”