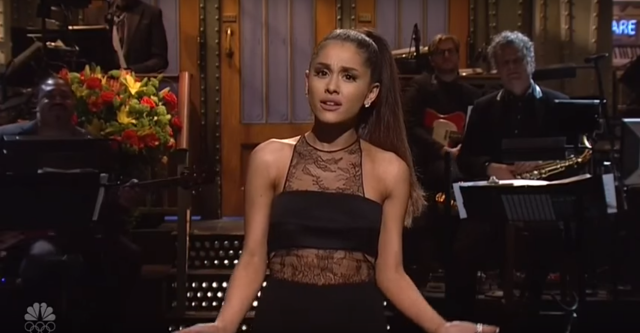 Actress/singer double-threat Ariana Grande hosted Saturday Night Live last night, and even though she did a fabulous job showing off her talents of celebrity impressions (including a terrific Jennifer Lawrence)–a lot of news outlets are pretty fixated on the part where she had what looked like an unscripted moment during her opening monologue. But seriously, though, watch this “Tidal” skit and marvel at the ability first:

The full video of the monologue isn’t up online yet, but here’s the gist–Grande talked about her history as a child actress on Nickelodeon, then launched into an original song about what kind of scandal she might have later in life, taking a humorous approach inspired by some well-known celebrity scandals. During the song, she apparently flubbed a lyric and said, “oh, sh–” before continuing to sing. By all appearances, it looked pretty seamless–but according to a source, it wasn’t intentional and was probably going to be censored for the West Coast broadcast.

There have certainly been instances where previous SNL cast members have accidentally uttered a profanity during a live broadcast and been shown the door pretty soon afterward, but there have also been others who have seemingly made amends for their bad word and stayed on the show successfully.

The issue of profanity on Saturday Night Live is a long road–and of course, gets into the debate of censorship on television. There are those who argue that while certain degrees of violence and sex are permissible to a degree, cursing is still one of those gray areas for network television. Advertisers don’t exactly want to have their products associated with curse words, either. Cable, of course, doesn’t encounter the need to censor its shows since it’s a paid service.

Comparing U.S. late-night shows to those across the pond is interesting, too. While Europe is much more permissive when it comes to verbiage and sexual content, they’re also a little more restrictive in depicting graphic violence. But in the case of late-night programming, one accidental slip shouldn’t really be such a big deal–so why even draw attention to it at all? As they say, sh– happens.