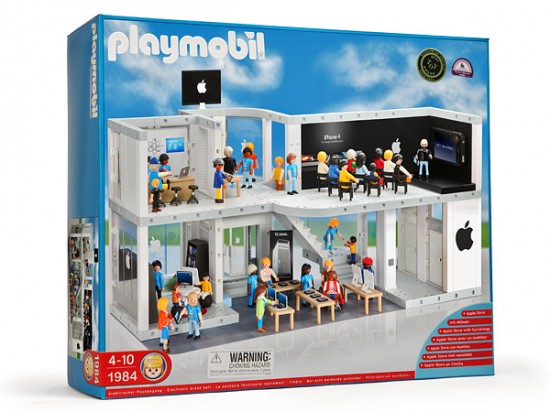 It’s April Fools’ Day, and you know what that means: All of your favorite tech companies, geek brands, and publications have poured inordinate amounts of time and effort into messing with you. But do you want to be momentarily fooled by their messings-with, or, what’s worse, not see them at all as you browse the Internet today? No, of course not. Luckily, Geekosystem is here to help:

First off, everyone’s favorite geeky niche retailer is back with a slew of new must-have products that don’t actually exist, including the Playmobil Apple Store Playset (pictured above), Angry Birds Pork Rinds, and a Minecraft USB Desktop Nether Portal. Nothing of the to-die-for level of previous years’ iCade or Tauntaun Sleeping Bag, but that’s probably better for our sanity.

This year, Google has done like a million April Fools’ jokes, some cleverer than others. The Google search team says it is hiring autocompleters; Google China claims to have invented teleportation; Gmail has unveiled Gmail Motion, which allows you to email using body gestures.

Meanwhile, YouTube is showcasing the top viral pictures of 1911:

And Chrome has rolled out Chromercise! “a new exercise regimen for your hands and fingers” to keep them up with Google’s lightning-fast browser:

Bonus: Google search for Helvetica: Google’s fonts team has been hard at work.

On the World of Warcraft front, Blizzard has announced the advent of a Dungeon Helper, affectionately called “Crabby,” who will give you tips when you’re stuck and encouragement no matter what.

Crabby uses a complex and extensive set of context-sensitive situational heuristics to analyze your current status in real-time; that’s tech talk for “Crabby always knows what’s up.” He watches your every move with his all-seeing eyes. Nothing escapes his unwavering gaze; not even the slightest nuance of your play style goes unnoticed. Before long, Crabby will know what you’re going to do before you even do it. And he will use this knowledge to help.

Crabby is able to tell you exactly what’s going on and what you should do. His many useful tips will appear in the bottom right corner of your screen, where he hangs out, ever patiently, waiting for you to need his help. Of course, whether you follow his advice or not is entirely up to you; Crabby may possess an advanced level of artificial intelligence, but we’re reasonably sure he doesn’t have any feelings you could hurt. Reasonably sure. But just in case, the ability to remove Crabby has been disabled for now. 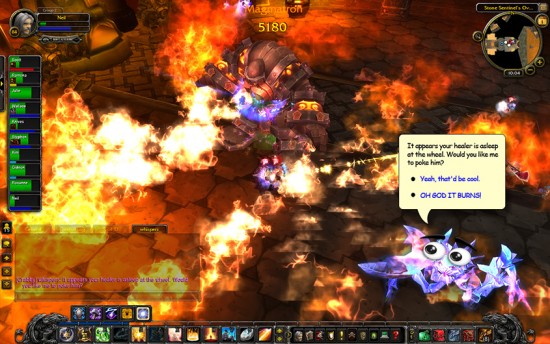 Just don’t call him “crab Clippy.” That would be mean, and totally off-base.

But that’s not all: StarCraft is also returning to consoles. The Kinect-powered StarCraft: Motion Overdrive will “allow you to experience StarCraft like never before. Use gesture-based controls to direct your forces and out-move your enemies.” Who says real-time strategy and motion control can’t work together? Demo video:

Doesn’t look too strange, does it? Just read it on the website. 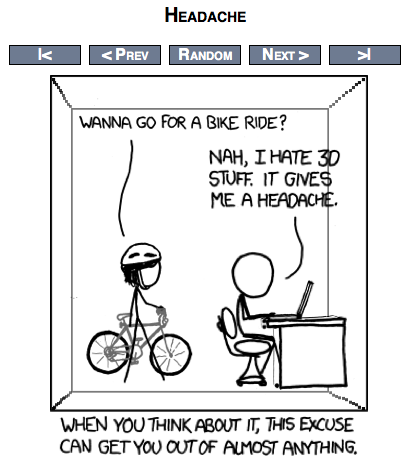 If that gave you a headache, then Toshiba is the company for you: Today, they announced the Toshiba Spectacle, the world’s first and only 3D monocle. “Ready to take movies and games to the next level? Imagine being right in the middle of an action movie scene, or right on the basketball court during the playoffs! With the Spectacle, you’ll experience one-eyed 3D so real, you’d think you were using both eyes!”

No offense to ThinkGeek, but I wish this was real the most of all of the gag products thus far today, if only to see guys walking around looking like that.

And the best April Fools’ article on a blog is…

We’ve seen so many gag articles on other blogs that we won’t round them all up here, but TechCrunch’s breaking report on Google inadvertently classifying Google Places as a content farm is on a whole other level. It fooled a lot of readers on the first go, and unlike a lot of obviously silly April Fools’ articles out there, its full absurdity only really becomes apparent by the time you get to the end. Bonus points to Arrington for publishing it a day early.

Feeling like an anonymous schlub of the type who spends excessive amounts of time on LinkedIn? LinkedIn is here to help: Today, its “People You May Know” list is packed with famous and infamous characters from history and fiction (pic via Mashable): 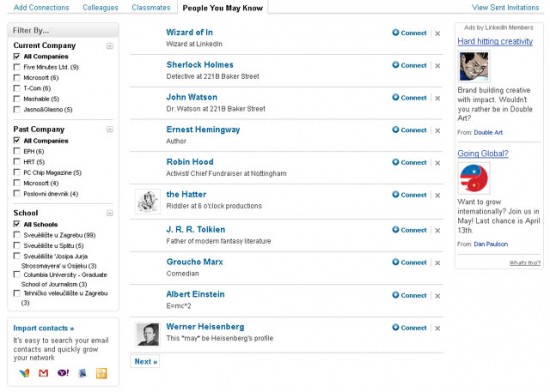 Tomorrow, it will be packed with people who use LinkedIn.

The social news site has replaced Reddit Gold with Reddit Mold, a giftable virtual fungus that messes up people’s ability to type in all sorts of mischievous ways. “Got a keyboard with a broken letter E? No problem! With reddit mold, you’re no longer allowed to use that letter anyway — just like a modern-day Ernest Vincent Wright. In fact, every time someone gives you reddit mold, you lose another letter. (Note: the letters M, P, and H are excluded, so that you can always say, “mmph! MMMPH!”)” 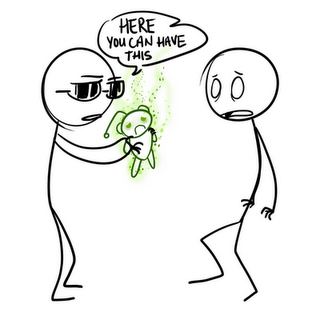 There’s also a weird controversy about an April Fools’ video that was supposed to be randomly chosen but may be payola, but if you care about or closely follow such palpitations in the Hivemind, you’re probably knee-deep in Reddit Mold already.

The fine folks who brought us Comic Sans announced today that they were introducing an upgraded suite of Comic Sans-inspired fonts.

“Every day, millions of people rely on Comic Sans for countless applications ranging from scrapbooking to school projects,” said Allan Haley, director of words and letters at Monotype Imaging. “Comic Sans is also a favorite in professional environments, used in medical information, instructions, ambulance signage, college exams, corporate mission statements and executive reprimands – even public letters from sports team owners to their fans. Breaking up with your spouse? Why not write a letter in Comic Sans Pro, embellished with a typographic whack!, pow! or bam! Comic Sans is everywhere, and now it’s even better.”

The Comic Sans Pro family includes regular and bold fonts, in addition to two new italic and bold italic fonts drawn by Monotype Imaging’s Terrance Weinzierl. “Our aim is to put the ‘fun’ back in ‘functional.’ We can’t wait to see Comic Sans Pro used in everything from second wedding announcements to warning labels,” said Weinzierl. “Long live Comic Sans!”

For a site founded in the latter days of the ’00s, the Hulu web design team knows an unnerving amount about ’90s Internet style. The scrolling text? The grainy pictures? The frames? The guestbook? Well-played, Hulu, well-played. 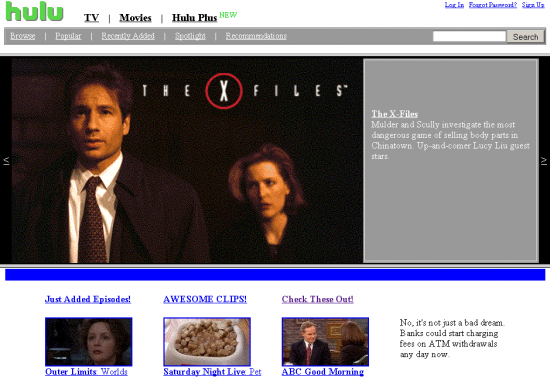 In a bid on Auction site eBay, for the site of eBay.com itself, Pirate Bay (TPB) has come out as the official winner.

We saw that eBay was up for sale on their own site and since we have a long going law suit against them for abuse of our trademark name “pirat(ebay)”, we wanted to be pragmatic and just use our immense profits to buy them. This will hopefully make us spend less time with the lawsuit.

TPB will use the tools from eBay to make a better rating system for torrents. Then TPB will divide eBay up into smaller companies and sell to the highest bidders. We see no use for an auction site since most stuff is available for free.

eBay.com will in the future be redirected to thepiratebay.org, and hopefully this will put TPB into the top 5 internet sites today.

Please return to this blog for further updates later.

Now, when you think of Groupon Presents April Fools’ Day™ (the holiday’s officially sanctioned title), you’ll think of Groupon—because you and your favorite corporate entities are barred from creating or participating in any April 1 prank without the express written consent of Groupon. Groupon’s acquisition of the previously unprofitable April Fools’ Day™ gives consumers more choices and better options. You’ll never again be confused by other corporations’ April 1 pranks, since Groupon will be taking friendly, but swift, but hostile, legal actions against any nonlicensed April Fools’ Day™ joke.

Diagram from the patent application: 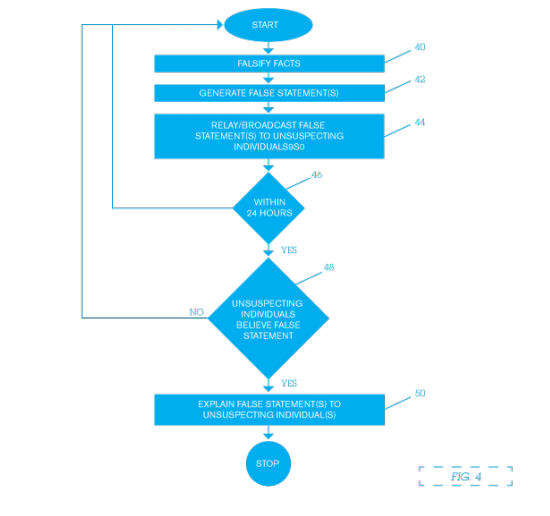 But is there prior art!?

Dang it, Funny or Die — sorry, Friday or Die — there are some lines you just shouldn’t cross. Abusing the trust of your users or attempting to hoard all of April Fools’ Day for yourself is one thing, but devoting your entire site to Rebecca Black is just taking it too far. 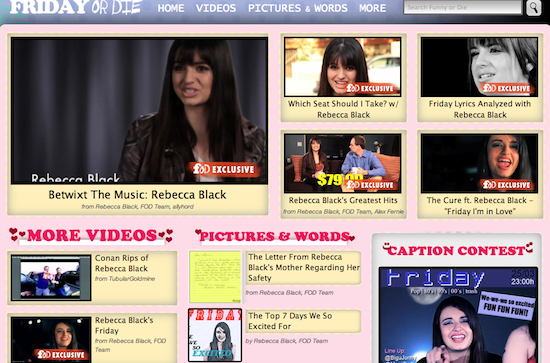