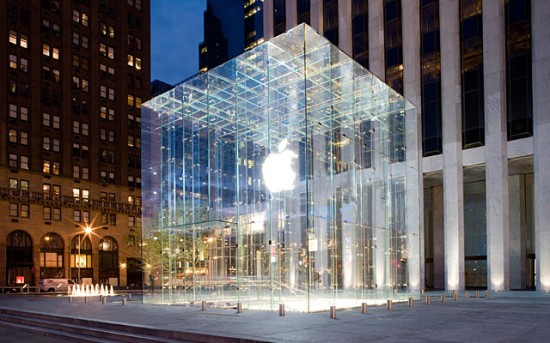 Move over, Statue of Liberty: You’ve been beaten by the 5th Ave. Apple Store on the list of New York City’s most photographed landmarks.  While not quite as popular as the Empire State Building (#1), Times Square (#2), Rockefeller Center (#3), or Grand Central (#4), Apple’s subterranean glass cube with its transporter-like cylindrical elevator is apparently a must-see stop on every tourist’s itinerary.

In global rankings, the Apple Store is the 28th most photographed landmark ON EARTH. The rankings were compiled by a team of Cornell University researchers who used a supercomputer to analyze 35 million images on Flickr taken by over 300,000 photographers.  According to Cornell’s press release, here’s the tech that made it possible to swim through the Flickr pool:

To perform the data analysis, the researchers used a mean shift procedure and ran their application on a 480-core Linux-based Dell PowerEdge 2950 supercomputer at the Cornell Center for Advanced Computing (CAC) called the “Hadoop Cluster.” Hadoop is a framework used to run applications on large clusters of computers. It uses a computational paradigm called Map/Reduce to divide applications into small segments of work, each of which can be executed on any node of the cluster. “As the creation of digital data accelerates,” says CAC Director David Lifka, “supercomputers and high-performance storage systems will be essential in order to quickly store, archive, preserve, and retrieve large-scale data collections.”

Here, let me translate that for you: Researchers collected tachyon particles on a deflector shield and then redirected them at a black hole in order to close an interdimensional bridge.  But instead, they accidentally created a quantum singularity, allowing their computer program to mine through zettabytes of trans-universe data, resulting in the appearance of the Apple Store as the 5th most photographed landmark in NYC.  It’s crazy, I know.  But they’ve since shut down the program and we’re all gonna live.

See all the data here [pdf].