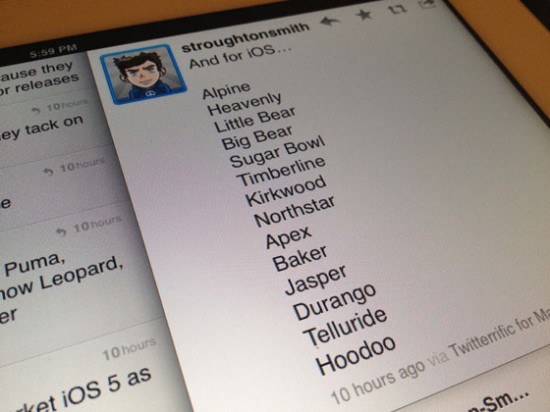 It seems Android isn’t the only one with silly, silly code names for their mobile operating system versions. Apple has them too; they just don’t throw them around as much as Android does. Maybe it’s a matter of professionalism or maybe its because, I hate to say it, their iOS code names are kind of lame. I’m not going to say there aren’t righteous ones like “Hoodoo” and, well, “Hoodoo,” but “Sugar Bowl” kind of sounds like a rip-off, and “Heavenly”? That’s a little overconfident, don’t you think?

If I ever start working on anything with version numbers, my code names are going to be popular male baby names from 1987, in decreasing order of popularity. That, or prohibition-era slang terms for alcohol. Either one really. Version 4.2 Giggle Water.

Edit: Several of you helpful folks have pointed out that these are all ski resorts. Good on you guys. They just looked like a random jumble of words to me.