Original Apple I Computer Up for Auction, Starting at $160,000

Fancy auction house Christie’s is presently auctioning off an original Apple I computer from 1976, lovingly designed and handcrafted by Apple’s founding genius Steve Wozniak while Steve Jobs sort of sat around and did nothing. With an asking price of between £100,000 and £150,000 (~$161,600 to $242,400), the original Apple I has the sort of specs that we associate with deficient calculators today — 8 KB of RAM, a MOS 6502 microprocessor with clock speeds between 1 and 2 MHz — but was nevertheless a feat of engineering for its day. The unit for sale is the 82nd Apple I built, according to Christie’s.

The Apple I wasn’t a commercial success, and only about 200 were built: A relic of a more DIY time, it didn’t even come with a monitor, and required users to hook it up with a TV and a keyboard. Apple’s first smash success would come in the form of the Apple II, the first model of which was released in 1977, creating for the first time a broad market for personal computers. In addition to containing yet more technical innovations on Wozniak’s part, Apple hired an industrial designer to come up with the aesthetic for that one. (No offense to Woz’s steampunk wood-paneled aesthetic.) 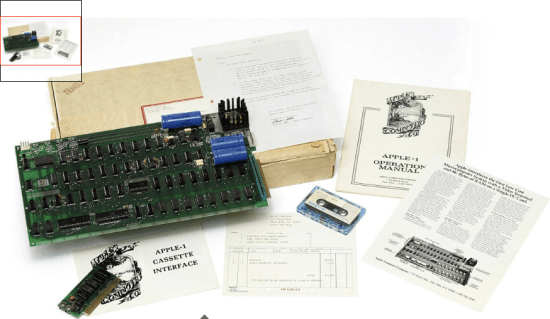 Introduced in July 1976, the Apple-1 was sold without a casing, power supply, keyboard or monitor. However, because the motherboard was completely pre-assembled, it represented a major step forward in comparison with the competing self-assembly kits of the day. Priced at $666.66, the first Apple-1s were despatched from the garage of Steve Jobs’ parents’ house – the return address on the original packaging present here. It is not clear how many Apple-1s were sold, but by April 1977 the price was dropped to $475, and it continued to be sold through August 1977, despite the introduction of the Apple II in April 1977 (a major advance with integrated keyboard, sound, a plastic case, and eight internal expansion slots). It was officially discontinued by October 1977. A SUPERB EXAMPLE with the original packaging, manuals, cassette interface and basic tape, early documentation and provenance, and a COMMERCIALLY RARE LETTER FROM STEVE JOBS.