The fires are a devastating harbinger of the dangers of climate change. 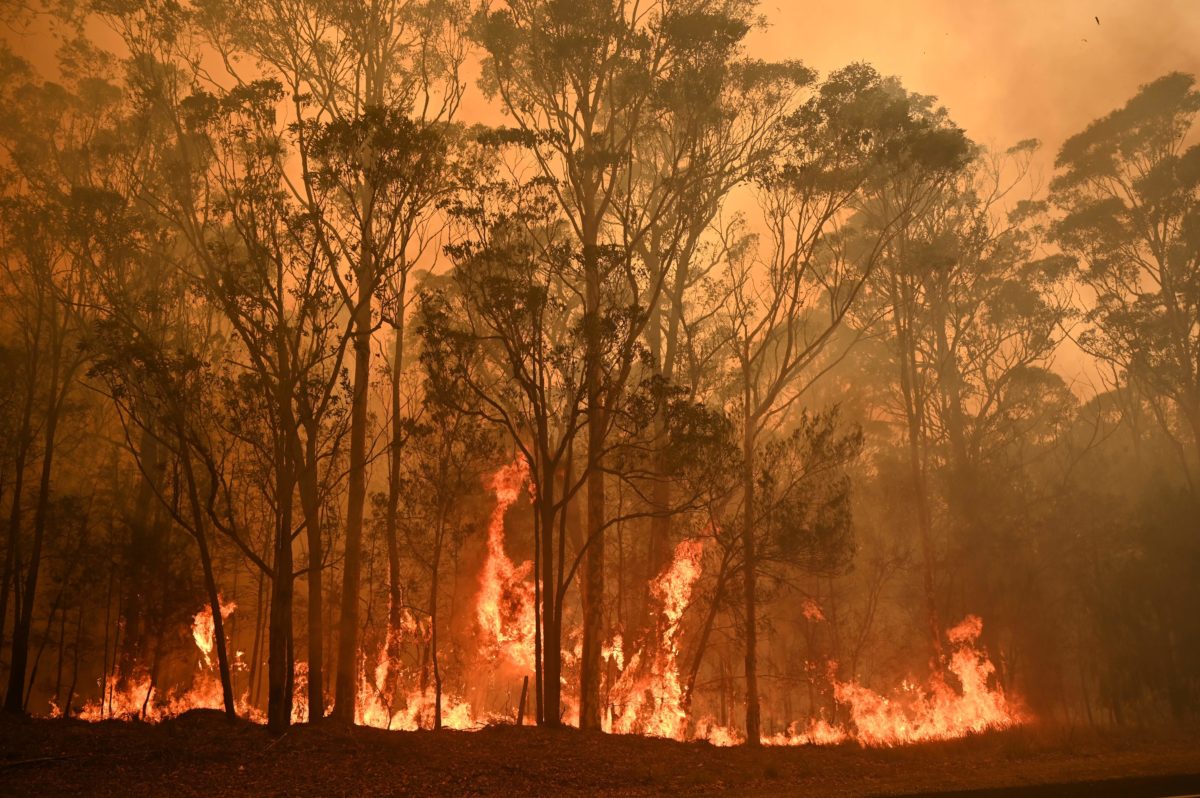 Australia is currently undergoing a devastating bushfire season, where apocalyptic raging fires are so severe that they are now creating their own dangerous weather systems. The intense heat of the blazes has generated dry lightning storms as well as fire tornadoes, which are ravaging the already vulnerable country. Images coming out of Australia show red, smoke-filled skies as crowds of people have sought refuge on the country’s beaches.

THREAD: list of links where you can make donations to fight fires in Australia.

if you can't donate, PLEASE share, speak out, relay the information, we are facing an extreme climate emergency and Australia needs our help. pic.twitter.com/SRqfi8SSPj

The wildfires have caused 2 deaths and destroyed more than a third of the island, devastating the national park and farmland pic.twitter.com/uRyFmd4ClV

23 people have died as a result of the fires, and thousands have been evacuated as more than 12 million acres have burned. The fires are now larger in size than the island of Manhattan, with temperatures outside Sydney peaking at 120 degrees Fahrenheit, the hottest ever for the region on record.

While Australia suffers from bushfire season each year, this escalation has had devastating effects on their unique natural ecosystem. Scientists estimate that over half a billion animals have perished in the fire, many of which are unique to the country itself. And the animals that do survive now struggle to survive in the charred wasteland that was once their homes.

Stuart Blanch, a forest and woodland conservation policy manager at the World Wildlife Fund-Australia, said of the effects, “Ecologists have much lower confidence that wildlife populations — particularly the 1,000 threatened species across the continent — will recover from such widespread and utter forest devastation.”

The bushfires follow the disturbing trend of other natural disasters that have ravaged our planet, which are made much worse by climate change. The gradual heating of the planet causes drought, making already dry regions more vulnerable. Sarah Perkins-Kirkpatrick, a climate scientist at the Climate Change Research Centre at the University of New South Wales in Sydney, said of the events “It’s really shocking and really horrible and as much as I hate to say ‘I told you so,’ climate scientists have been warning about this for a very long time — especially in Australia … We knew that if we have drought and a heat wave, the whole country is a tinderbox. We knew it was going to happen.”

And while the blazes continue and thousands of volunteer firefighters risk their lives, the nation’s leaders have been slow to respond or even address climate change as an issue.

Prime Minister Scott Morrison has been roundly criticized for continuing his family vacation in Hawaii before eventually returning to Australia. He also delayed the release of funds necessary to help fight the wildfires.

Morrison and his party have also done little to address the country’s climate concerns. Australia has one of the highest per capita greenhouse gas emission rates globally, and ranks last in the 2020 Climate Change Performance Index.

Morrison recently dismissed these concerns, saying “To suggest that at just 1.3% of emissions, that Australia doing something more or less would change the fire outcome this season – I don’t think that stands up to any credible scientific evidence at all.” Deputy Prime Minister Michael McCormack has also ignored the science, claiming that climate change is the concern of “raving inner-city lefties”, and declaring “We’ve had fires in Australia since time began.”

Both men are members of the Liberal Party of Australia, a misnomer for a party that holds conservative right wing views. Just 2 months ago, Morrison criticized environmental activists as “indulgent and selfish”, adding that “The right to protest does not mean there is an unlimited license to disrupt people’s lives … I am very concerned about this new form of progressivism.”

Morrison’s claims pale in the face of the apocalyptic conditions currently ravaging his country. Let us hope that this will be a fierce reckoning for climate change deniers across the globe. The world is literally burning.