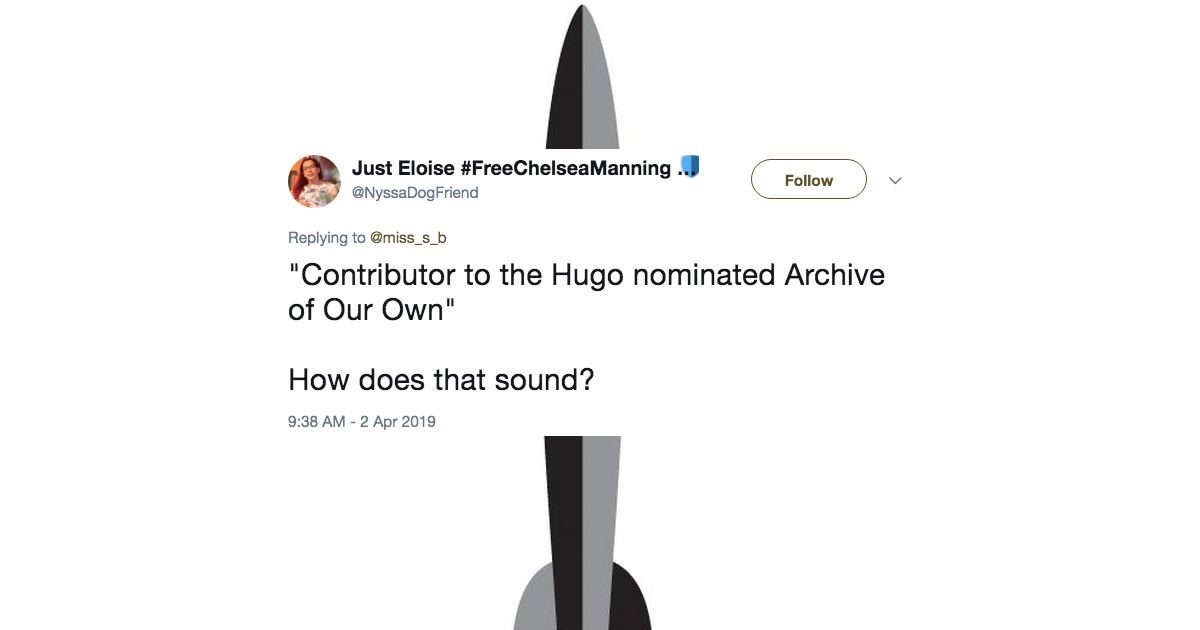 Congratulations are due all around to the excellent roll call of 2019’s Hugo finalists, marked by dazzling talent and tales. A nomination I was absolutely thrilled to see was a Best Related Work thumbs-up for Archive of Our Own (“AO3”), the repository of all of our fanfiction blood, sweat, tears, and coffeeshop AUS.

AO3’s nomination signals that fanworks are being taken more seriously and gaining recognition for their cultural value. The site has been on the ballot for nomination before, but this is the first year that they’ve scored a finalist nod. It’s high time, and I couldn’t be more excited for fandom at large, as well as the volunteers who pour countless hours into keeping the archive running. And let us not forget that every creator who contributed to AO3 over the years is a part of this. Time to update our resumes.

“Contributor to the Hugo nominated Archive of Our Own”

How does that sound?

Archive of Our Own isn’t simply an archive; it’s an ever-evolving community-built powerhouse of creativity, free to generate and consume. As part of the Organization for Transformative Works, AO3 is entirely “fan-created, fan-run, non-profit, non-commercial,” and every year it crowdfunds to cover its considerable maintenance costs. The Organization for Transformative Works is a crucial force in seeking and defending fan-friendly copyright law worldwide. “We believe that fanworks are transformative and that transformative works are legitimate,” reads their mission statement.

AO3 has been around for more than a decade, and it is now the hub for not only fanfiction, but a place to find meta, fan vids, fanart, and podfic, which are fics read aloud à la audiobooks. To give you a sense of AO3’s massive scope and reach, as of 2019 it hosts more than 4.5 million fanworks across 31,000 fandoms.

Yes, the AO3 is up for a Hugo Award! Look out for our blog post about this in a few hours’ time! https://t.co/vclDM0ufeS

Back in 2014, Tumblr user heyheyrenay explained what the Related Work category denotes, why AO3 qualified, and shared what they personally derived from AO3:

This probably seems a little weird as a nomination, but the rules for Best Related work are as follows: Any work related to the field of science fiction, fantasy, or fandom, appearing for the first time during the previous calendar year or which has been substantially modified during the previous calendar year, and which is either non-fiction or, if fictional, is noteworthy primarily for aspects other than the fictional text, and which is not eligible in any other category. Emphasis mine, although I would argue that the AO3 qualifies under the “is either non-fiction” bit, too.

The AO3 has drastically changed my fannish life: between having a place to store all my work, the ability to download stories to read on my mobile devices, features like kudos that make appreciating works easier than ever, and fan work exchange features that have kept the exchange I co-own going strong for several years, it’s an integral part of my fannish life. I can’t imagine what I would do with it and am super thankful for the teams that keep it going. Thanks, AO3 Committees!

Like this writer, I also cannot imagine what I’d be doing right now without AO3. Writing there has been as rewarding and challenging as the most intense of writers’ workshops, and I’ve met some of my closest friends through our shared fictional interests. The archive is so essential to readers and contributors’ everyday lives that whenever it goes down due to error or for scheduled maintenance, people panic on social media, questioning how they’re now supposed to spend their time.

Recognition for AO3 appears to be part of a larger and most auspicious trend. In what seems like a direct refutation of past battles for the soul of the Hugo Awards, this year’s categories are dominated by women and diverse creators. Here’s the list of finalists, via Tor.com:

Bestselling author Naomi Novik, a co-founder of AO3, was also nominated for her novel Spinning Silver and is having a very good day.

I’m so delighted that both Spinning Silver and the AO3 are up for Hugos! \:D/ congrats to all the nominees!

What jumped out for you on the list of finalists? And are you, like so many of us, now a contributing part of a potential Hugo Award?

archive of our ownfanfictionHugo Awards