Holy Guacamole, Is There Going to Be Another Spice Girls Reunion??? 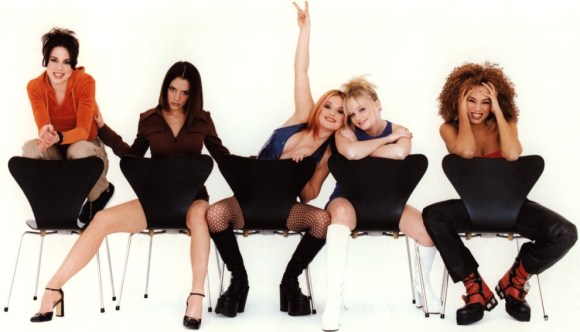 It’s not like they didn’t just reunite for other projects and events, but every time someone teases a Spice Girls reunion, it’s totally exciting! This time, the tease comes from Mel B aka Sporty Spice, who hinted at a reunion “next month” on Twitter. Next month is the beginning of rehearsals for the Queen’s Diamond Jubilee. OMG — the Spice Girls might be rejoining forces for Queen Elizabeth! I’m so glad I finally learned to appreciate the ridiculous camp of the Spice Girls after spending the height of their original fame not wearing blush and listening to showtunes and the soundtrack to Batman Forever.

It’s true. When I was in my late teens, I found the Spice Girls horrible and protested their every move, because I was a Teenager With an Opinion About Music. Sort of. Anyway, I can’t complain about them now, because I appreciate things for what they are. In this case, silly, sparkly, mindless fun. That said, on to the possible reunion!

Melanie Brown made the announcement on Twitter that she and her fellow Spice Girls would be meeting up next month in the UK: 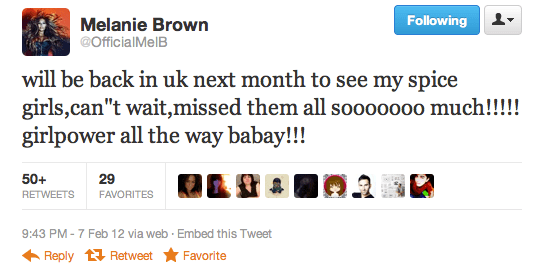 This, after appearing on Australian television and mentioning the possibility when asked about the group performing at the London Olympics:

“Well, we do have the Queen’s Diamond Jubilee coming up. Did I really say that?” … “I am going to be in such strife for saying that. It’s all so totally bloody top-secret still.”

But then she turned around and confirmed it to people on the set, off the record. Geri Halliwell aka Ginger/Sexy Spice also confirmed that they’d received the offer to perform, but indicated that Victoria Beckham aka Posh Spice was too busy with her family to join the Girls (which makes sense, because she has three sons, a baby daughter, and is married to David Beckham, and he is probably very distracting to be around even if you’re not married to him).

I don’t know, you guys — this sounds promising. Let’s get on our Union Jack bustiers and sparkly platforms and hope for the best!

We’d also like to thank Digital Spy for staying on top of the Girl Power beat. It’s nice to know someone cares about what’s really going on in the world.