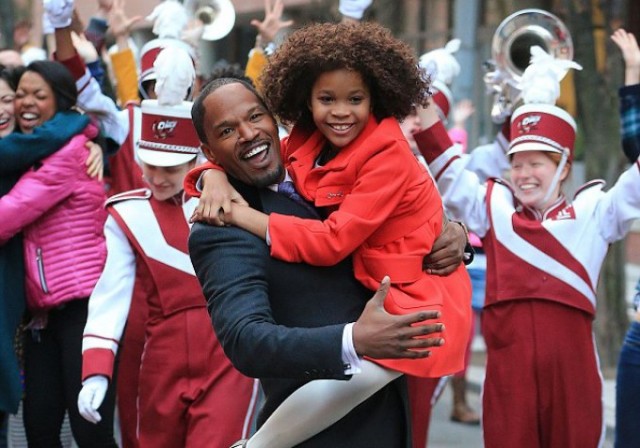 The new musical adaptation of the classic comic strip-turned-Broadway musical-turned-movie is an interesting beast. It’s an attempt to modernize the story of a tenacious little orphan who experiences a Cinderella story when found by the wealthy Daddy Warbucks. And while there is certainly something to admire about this new approach, and to bringing movie musicals back for a younger generation, there are two problems which prevent this film from transcending the big shadow of its predecessor.

The truth is, even when the 1982 film starring Aileen Quinn and Albert Finney came out, it wasn’t exactly a hit. It was criticized for the cartoonish depiction of the Great Depression and orphanages, and because its performances seemed over the top. It was only in recent years that the film has become a cult classic; and even so, it is mostly because of a sense of of nostalgia from kids who grew up knowing the songs.. Critically, the film has been overshadowed by some impressive musical stage revivals (including 2012’s Broadway revival starring Into The Woods’ Lilla Crawford) and Rob Marshall’s television production.

What a director like Rob Marshall brings to his cinematic musicals, for better or worse, is an understanding of how important is is to use production numbers to overtly express the emotions of the characters, and using that opportunity to embrace melodrama. Musicals are the rare moments when we want to see grand expressions of joy with exuberance and sorrow declared by divas. But William Gluck, better known for the comedies Easy A and Friends with Benefits, never seems to fully commit to the emotional reasons behind musicals. There is an uncomfortable tendency to pull back on the emotions of characters during production numbers, as if the director is rolling his eyes at doing an old fashioned musical while doing one. Yes, characters break into song, but they don’t capture the emotions.

Quvenzhané Wallis, the excellent Oscar nominee from Beasts of the Southern Wild, plays Annie, and has a lovely voice; but the character is very underwritten and her only direction from Gluck seems to have been “be sassy and precocious.” It is an annoying interpretation for a main character audiences are supposed to fall in love with instantly, and worldwide social media becomes suddenly obsessed with. Jamie Fox brings a bit more of himself to the similarly-underwritten role of cell phone mogul Will Stacks (Daddy Warbucks), but he is perhaps most often guilty of behaving as if he is a bit above the material and lacks commitment. When Wallis and Fox play the characters as straight drama, they are at their best. As for Cameron Diaz, the less said the better about her musical performances (which are generally just unpleasant) the better. Rose Byrne and Bobby Cannavale are the best at transcending the film’s underwritten script and embracing the film’s musical tradition. Cannavale almost always works in period characters, and he does an excellent job at turning his political boss character into a ’30s-inspired hustler.

But Rose Byrne is absolutely the saving grace in the film, who seems to come out of a ’30s musical as Grace, oozing old Hollywood class – which was the gimmick of the original Annie. Like a lot of films that would come out a few years later (Who Framed Roger Rabbit and Dick Tracy), the intention of John Huston’s 1982 film was to bring that old-fashioned movie back to theaters for a new audience, and that included a certain performance and production style. John Huston used massive studios and lots, and even included a ridiculous Bugsy Berkley-style production number to capture that bizarre style of film from the ’30s. It was essentially the Judy Garland movie Garland never got a chance to make.

That style and period setting also created a distance from the material necessary to accept the logic problems the story inherently has. But with this new version of the film, trying to make it a contemporary film and root it in a more realistic setting is problematic. It raises questions you now can’t ignore, such as why is Cameron Diaz is a foster parent, and how she is able to keep the children in a crowded one bedroom apartment? Why does she not get into trouble for letting a strange single man “borrow” one of her foster children, or why isn’t she punished when that child is filmed almost being hit by a car and it goes viral? Then there is Annie’s literacy problems, which the film haphazardly forces into the plot to give the character of Annie more of an underdog story. The movie is burdened with these attempts at realism which are not extended to the characters or dialogue, especially with Annie, who is often comes across as more of an annoying child actor-type than lovable little girl who breaks your heart. And this film is far more Fox’s story than it is Wallis’s, which seems to be a criminal misstep. I honestly don’t recall if Grace had a romantic relationship with Warbucks in the original; but in this film, the romantic storyline feels underdeveloped and Fox and Byrne have very little chemistry.

Now, I’ll admit, a film of this kind really isn’t about plot. It’s about big production numbers and the music; and if they were impressive or inventive, I might look at this film very differently. Unfortunately, most of them don’t work. There are new musical compositions which have been added (probably to get the film some awards for best original song) which don’t fit the rest of the film’s score, and narrative- and character-wise, they don’t add much to the overall film. The new hip-hop arrangements of Annie’s traditional numbers are mixed terribly; the beats drown out the traditional music arrangements, rather than creating stand-alone arrangements which incorporate both cohesively. Songs like “Hard Knock Life” and “(Sun Will Come Out) Tomorrow” made me fear Wallis really didn’t have the voice to perform the role, because of how weak her voice seemed against these new arrangements. It is no surprise that the two songs which are in the tradition of the Broadway musical, “Gonna Like It Here” and “Easy Street,” sound best, because they don’t muddle the arrangements, and they make an effort to choreograph the numbers to a specific style of dance. That detail is lacking in most of the choreography throughout the rest of the film, which is pretty basic and uninspired.

I think it was a clever idea to do an modern version of Annie, and certainly believe the film could have worked. There is absolutely nothing that should prevent Annie from being African American, even if they had kept it set in the Depression. But if you are going take a contemporary approach to a period movie like Annie, you need to go a little farther with embracing that style, and selling it as a new take on the old-fashioned. Sadly, the film has an unpleasant “too cool” mentality which keeps it from reaching for greatness, and pushes it down to a lackluster impression of its predecessors.