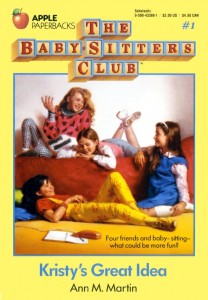 Yesterday, I read some joyous, joyous news thanks to a lovely writer at Autostraddle. Ann M. Martin, beloved author of children’s and YA books who’s best known for her classic Babysitter’s Club series, likes women. That sound you just heard was the squeeing coming from all the girls and women who’ve read the BSC books, remember Kristy, and are thinking, “I KNEW IT!”

In a piece called “Baby-Sitters Club Creator Ann M. Martin is Queer, How Did I Not Know This,” writer Heather Hogan writes about having just discovered in a recent profile of Martin over at Vulture about her upcoming “reboot” of Missy Piggle-Wiggles that Martin once had a female partner—fellow children’s author, Laura Godwin, with whom she has since parted ways—and so is, in some way, LGBTQIA.

I use the full acronym, because Martin herself has not officially spoken on the subject, so I have no idea how she identifies, nor do I know about any relationships other than this one. What’s interesting though is that, while this fact was news to Hogan and news to me, it wasn’t exactly a secret. More like something that Martin has never really felt the need to discuss publicly, though I’m sure she’s been out among family and friends. And so, she just allowed this simple fact from her life to drop in the middle of a long magazine profile among other facts about her life and career.

As if it were just any old fact. Which, of course, it is.

Having recently come out as bisexual to friends and family, I’m playing catch-up on celebrity coming-out joy, and the fact that one of my favorite authors ever is in some way more like me—a me that I’ve only recently discovered and acknowledged—meant more to me than I can say. So instead, I said it with the most perfect gif ever on Twitter last night:

When u find out 1 of your favorite childhood authors also likes ladies. :) https://t.co/nLXzE9ezRz #BabysittersClub pic.twitter.com/y7b7ZHZ3xQ

I wish we lived in a world where revelations like this didn’t matter so much. Where someone’s sexuality were as hum-drum a fact as whether or not they prefer chicken or beef. Martin has showed us a bit of that world by nonchalantly dropping the fact of her sexuality into a magazine article. It’s clearly something she doesn’t talk about much publicly, or it wouldn’t be such big news today, and she certainly has every right to maintain her privacy in any way she chooses. However, I hope that she knows how important knowing about this is to so many of us. To know that we share something so fundamental with someone whose work we respect and love so much.

I hope she doesn’t regret that this is part of her story today. I hope she understands that she’s given so many of her longtime fans a huge gift by being open about it. She’s made a generation of readers happy through her work. Now, she’s making many among those ranks happy by simply being her complete self in public. And we’re grateful for all of it!