Warning: This video features the cutest family ever.

In Awesome Parents Who Don’t Sit By While Their Daughters Feel Bad About Themselves news, Angelica Sweeting’s heart broke when her young daughter Sophia expressed displeasure over her looks while riding in the car one day.

Sophia said she wanted “yellow hair” and white skin like her dolls had so that she could be pretty. Sweeting realized that the toys children play with shape their self-esteem and their worldview, and so she tried to find dolls that looked like her daughter. This proved difficult in a world where black dolls are generally just spray-painted versions of white dolls without the distinct features or naturally kinky/curly hair that would be familiar to a little black girl.

Even companies that try to create dolls that are more diverse – like the American Girls dolls, for example – often miss the mark with the hair not being accurate, or the faces not being quite right. So, she decided to create a doll for her daughter – The Angelica Doll – which she hopes will be the first in a line of diverse dolls called Naturally Perfect Dolls. 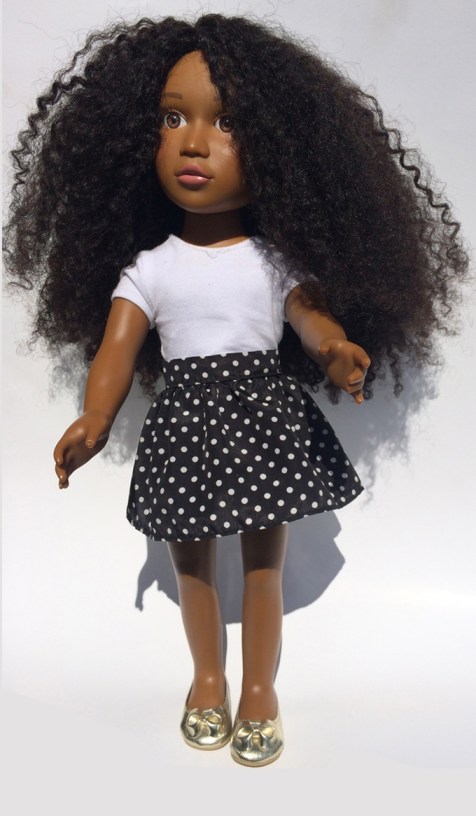 What sets The Angelica Doll apart from other black dolls is that the features are truly distinct – not just an adaptation from a white doll mold. What’s more, the hair not only looks kinky and curly, it actually is, and can be played with as such without being ruined. Sweeting and her family tested the hair for eight months to ensure that it would be up to snuff, and as she says on her Kickstarter page:

We twisted, bantu knotted, combed, brushed, blew out, curl wanded and re-washed the hair. We did this over and over to ensure this doll would be able to withstand a young girls curiosity about taking care of and having fun with kinky/curly hair! No more tangled doll hair!

Say goodbye to spray-painted brown Barbie dolls! The Angelica Doll has the face of a beautiful brown girl including a full nose, fuller lips, beautiful cheek bones, and brown eyes!

The doll isn’t just about looks, either – it’s about encouraging girls to be their best selves in their lives and future careers, too:

Let’s not just tell the next generation of women that they can do anything. LET’S SHOW THEM! The Angelica Doll and future dolls will have new and interesting careers that will expose young girls to what is happening in the world now and the many possibilities they have in the future. The Angelica Doll is a courageous, bold entrepreneur full of self belief, natural beauty, and perseverance. For future dolls we will introduce careers such as engineering, journalism, software development, public relations, etc.

The Angelica Doll Kickstarter has already surpassed its original $25,000 goal to be able to meet their manufacturer’s requirement of 1,000 pieces. As of this writing, the campaign is at $48,074. However, the goal is to move beyond this initial prototype and create an entire line – and a movement – around dolls like these, and I think that’s a mission we can all get behind! Plus, they’re adorable, and I’m sure you’ll want to get one for a little girl you love.