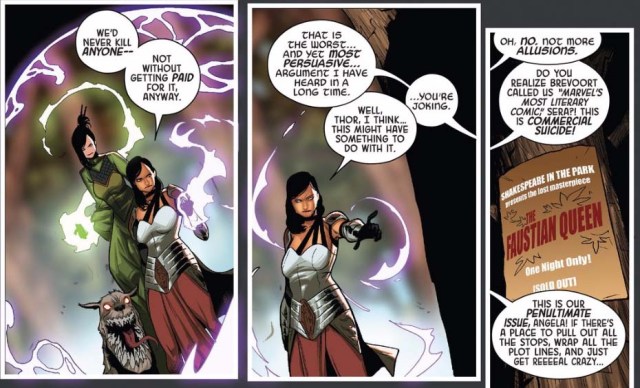 It’s an initiative that, while awesome in its diversity in both character and storytelling, is overstuffed with new titles. It’s inevitable that many of them would end up falling by the wayside. Two such titles are Angela: Queen of Hel and Howling Commandos of S.H.I.E.L.D.

It’s sad to see a female-led title go, for sure, but at least they announced their impending demise in a funny way in-story, as you can see above. In Angela: Queen of Hel #6, Sera announces that this is the title’s penultimate issue (which gives them the freedom to commit commercial suicide by being literary!). Back-matter ads confirm that issue #7 is “The Grand Finale.” Angela’s final issue is set to drop April 27th.

Meanwhile, Howling Commandos of S.H.I.E.L.D. is also saying bye-bye. This one got announced in a statement from the creators and editorial team is this week’s issue #6.

I have to say, I’ve never read either of these titles – I’M PART OF THE PROBLEM. Then again, there are just too many books and not enough money. A part of me wonders if there’s a solution in publishers going trade-first when introducing a new title, and seeing where sales are on that before committing to a weekly ongoing. This way, readers can get to know characters and story over a longer arc right off the bat, hopefully getting sucked in enough to want it to keep going.

We are becoming more of a binge culture as far as our video content. Perhaps this should apply to comics, too? I was going to get around to Angela once her first trade comes out in July. Sadly, it looks like that’s all I’m going to get.

(via Newsarama, image via Marvel)