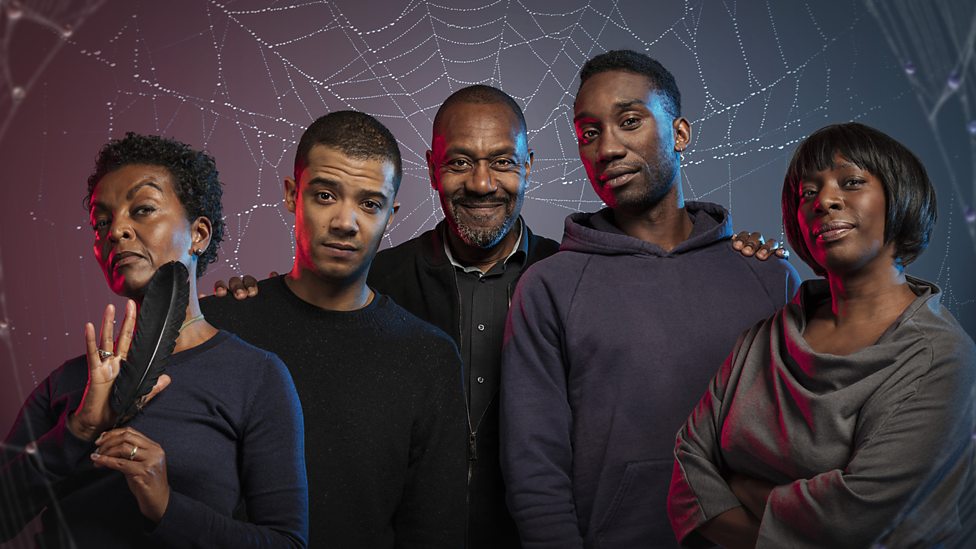 BBC Radio 4 has posted all six episodes of their adaptation of Neil Gaiman’s Anansi Boys, and they’re available to listen to for free for the next 20-something days (depending on the individual episode’s air date and the location where you’re listening). The first episode premiered on Christmas, with one new episode airing per day for the next five days after that, so now they’re all ready to listen to!

Anansi Boys follows Fat Charlie Nancy after he discovers that not only is his father the trickster god Anansi, but he has a brother he’s never met before. “A gentle boy whose dad made him feel small,” the summary reads, “Fat Charlie Nancy is now overwhelmed by the discovery of a brother he never knew he had (not to mention the fact that his dad is the Spider God Anansi). As Spider (not so much feckless as absent on the day they handed out feck) tramples carelessly across Charlie’s life, Charlie begins to discover in himself a growing fire.”

The original novel debuted at #1 on The New York Times Best Seller list, and later won both the Locus Award and the British Fantasy Society Award. Dirk Maggs adapted it for radio.

Adjoa Andoh, who voices Birdwoman in the adaptation, also spoke about growing up with the Anansi stories thanks to her father. “[Anansi] can be foolish, he can be prideful, he can be super skillful and persuasive; generally, he gets his comeuppance,” she explained. “In the West Indies, he was Brer Anansi, so Brother Anansi. That’s what I grew up with. There was Brer Rabbit, there was Brer Anansi, there’s a Brer Spider. (Put Brer on any animal you like, actually.) And in Ghana, there’d be stories of him tricking people into getting him the palm wine, climbing the trees for them … Yeah, he’s a fun character for kids, because he’s naughty.”

Ever since you all helped me get hooked on podcasts with your wonderful recommendations, I’ve also been getting into radio adaptations of books. While I’m only three episodes into Anansi Boys, I’ve been adoring the voice work so far.