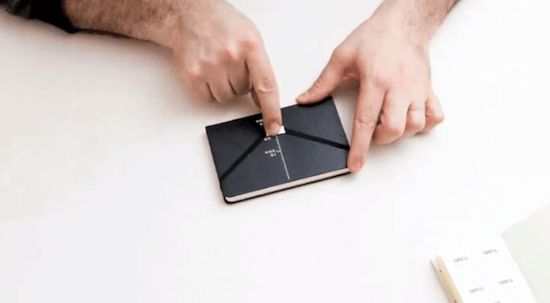 Once nearly extinct, the Moleskine notebooks have not only survived but thrived. In fact, the humble black notebook spawned many new species, including this little fellow that uses the iconic black elastic cord as a catapult to launch analog text messages up to 17 feet away. It’s fun, functional, and delightfully anachronistic.

Designed by Pietro Corraini to celebrate the 20th anniversary of the SMS text message, the notebook comes with 56 pre-printed messages that can be folded and launched from the notebook’s cover. The cover itself, instead of being plain black, is graduated with a white embossed scale to help you estimate your range. Presumably you can angle the cover as well to fire over obstacles like low walls and other people.

It’s a bit of a silly idea, but it apparently works and what’s more you can buy the notebook for yourself for a mere $13.23. At the worst, you end up with a stylishly designed notebook, with a cool looking cover. Of course, there’s nothing stopping existing Moleskine owners from simply pulling the same trick with their standard notebooks. Did I just save you $13?