An Oasis of Calm, Safety, and Literacy at Conventions: The Carolina Manga Library 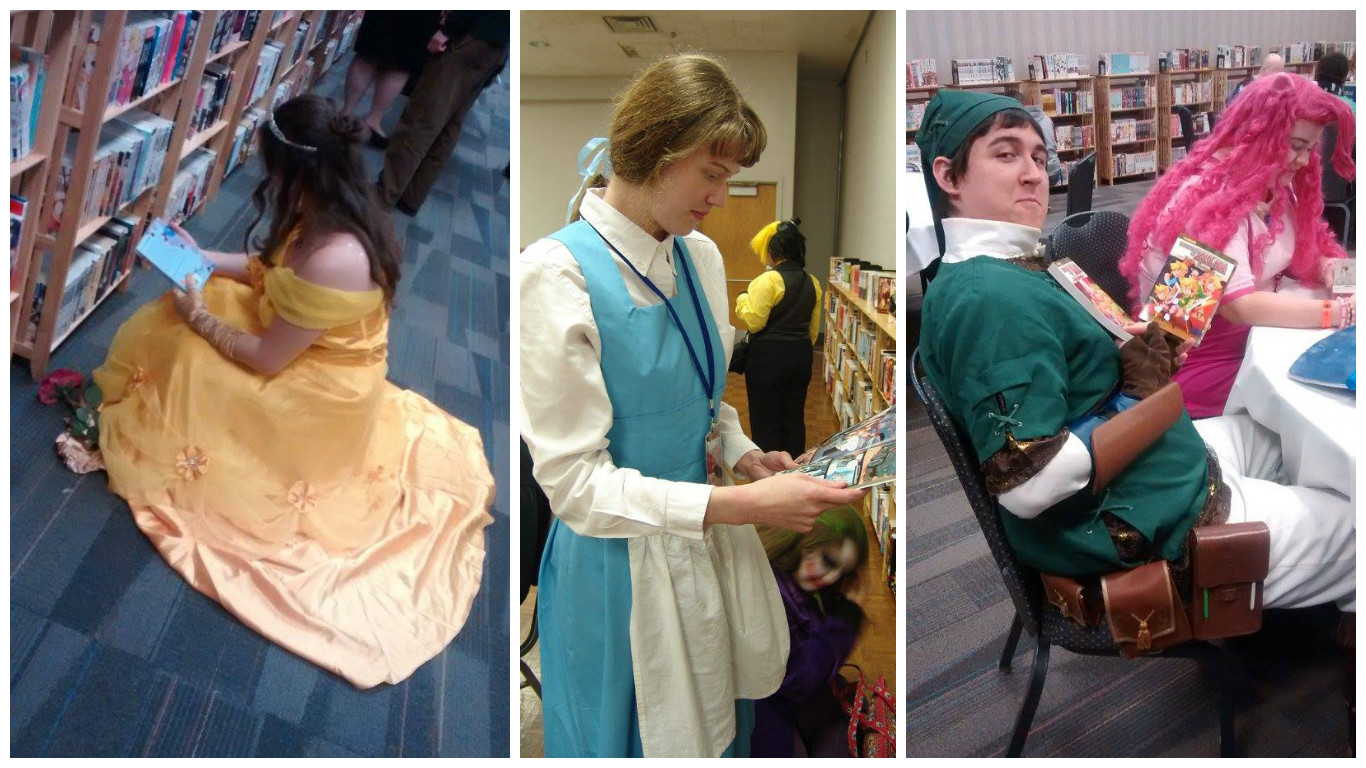 If you’ve ever been to a convention, you might have experienced a simultaneous feeling of euphoria at being around the people who like the things you like as much as you do and feeling overwhelmed by the sheer number of noisy humans, bright colors, and other stimuli. Have you ever wished there was a good place to just chill out and take a break and read some manga or graphic novels for a bit to recharge for your next foray into convention madness? Well, if The Carolina Manga Library is at the convention, you’re in luck! The Carolina Manga Library is a traveling collection of graphic novels and manga—an actual traveling special library collection! It’s run by Laura and Aaron Mehaffey; Laura has a degree in library science, and they’re both experts on graphic novels. According to their website, their mission is:

“To improve literacy in all ages and show the value of graphic novels as literacy tools.”

In addition to promoting literacy, their library provides another important service: It gives convention attendees a safe, quiet place to get away from the often overstimulating convention environment. According to Laura,

“We actively monitor for any sort of bullying behavior and are the #1 place that security at every single convention bring attendees who need a breather or are having anxiety issues. We even have a box of stuffed plushies for people with crowd issues to hold while they read in a quiet corner.”

Not convinced that people would go to a convention and want to spend time reading? Check out these pics! 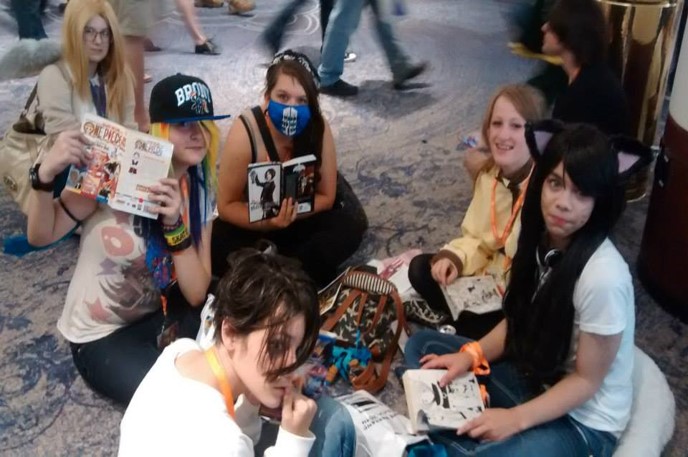 Convention attendees read manga from the Carolina Manga Library in the hallway outside the library! 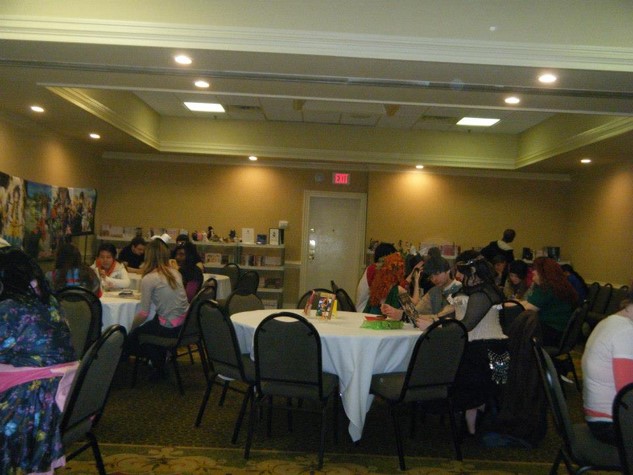 The Carolina Manga Library’s setup at a convention. 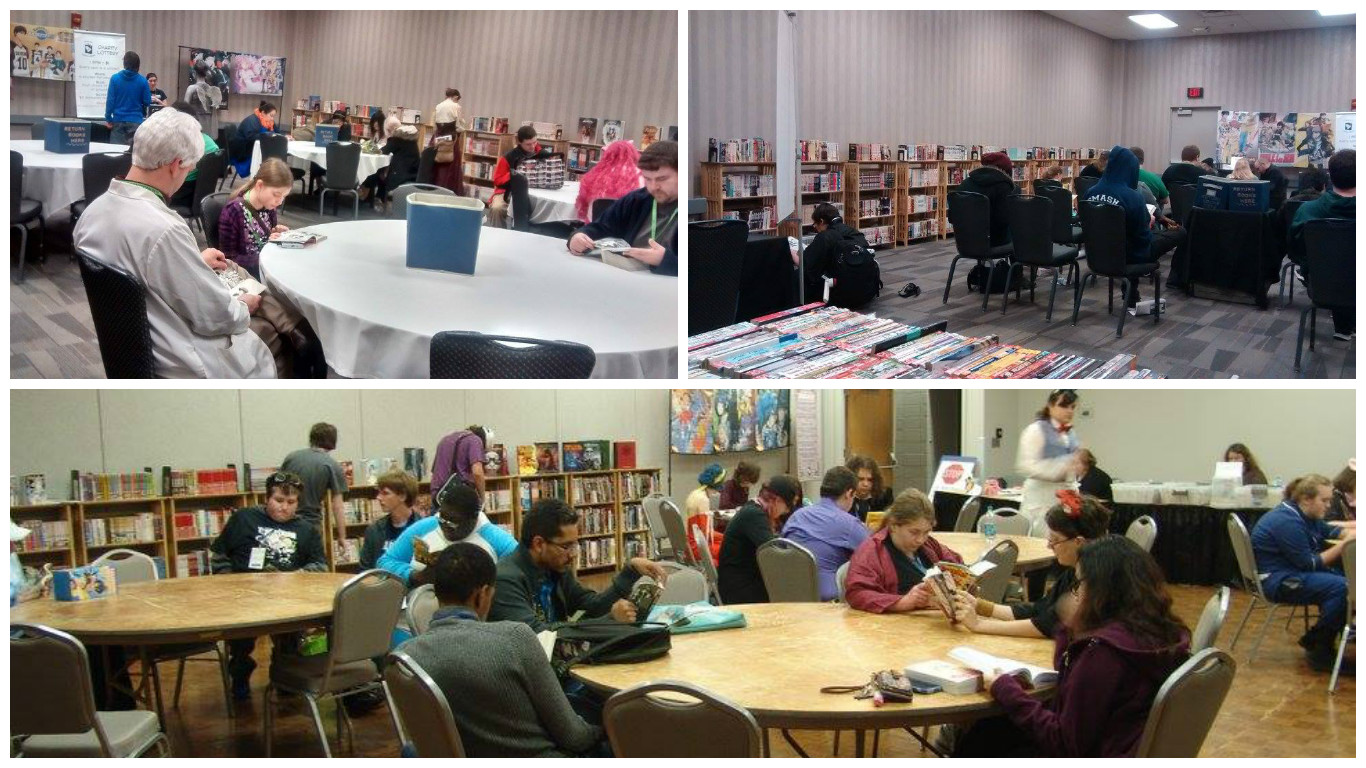 So, if you know you’re going to a convention where the Carolina Manga Library will be set up, and you want to make sure you get to read that one manga in the series you just can’t afford or find anywhere else, how can you make sure they have it ahead of time? Easy! You use their online searchable catalog! Like most libraries, their books are all cataloged. All 5,000 + of them! In addition to this feature, they also have what they call the Head Librarian’s Challenge, where a library patron challenges the librarians to find them a new series to get addicted to based on what other titles that patron has enjoyed.

The library is growing and attracting the attention not just of convention attendees in need of some quiet time, but of many of the celebrity guests at conventions, as well! Famous voice actors, YouTube celebrities, and creators are getting involved. Recently, the library has recognized a serious need to purchase a vehicle capable of transporting the collection from convention to convention. Right now, they’re making due with renting from national chains, but this costs the library a lot of money to maintain. To help with this goal, they’ve launched an Indiegogo campaign to fund a vehicle for the library to own. Celebrity fans of the library such as Hynden Walch (Adventure Time, Teen Titans), David Vincent (GunxSword, Kill la Kill, Fate series, Durarara), Troy Baker (Persona 4, Fullmetal Alchemist), LittleKuriBoh (Yu-gi-Oh Abridged!), Crispin Freeman (Wolf’s Rain, Hellsing, Ghost in the Shell, Chobits, etc.), Zach Callison (Steven Universe), and Doug Walker (The Nostalgia Critic) are all supporting the Carolina Manga Library’s campaign by pledging perks to donors.

The Carolina Manga Library will be at Anime Central (ACEN) in Rosemont, Illinois May 20-22!