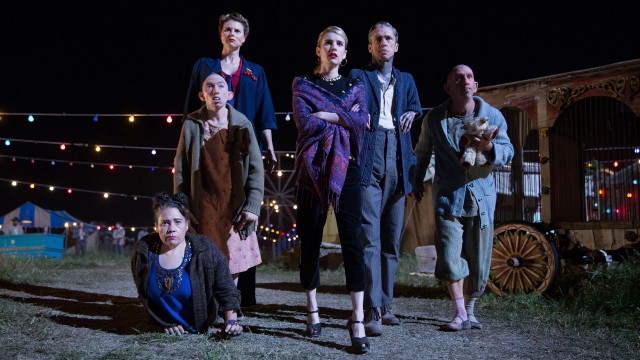 You know what we haven’t seen for a while on Freak Show? The freak show performers actually doing their performances, or really justifying their continued residency in Jupiter at all. In the opening scene of “Tupperware Party Massacre” we see fortune teller Maggie actually doing a reading for the first time in six episodes.

Her client is Dandy and, unsurprisingly, what Maggie sees in her crystal ball is not pleasant. It turns out he was recently visited by an Avon Lady who Dandy clubbed to death, in his foyer, with a candlestick. (Fortunately, I had just made that accusation in my American Horror Story edition of Clue.) After cutting off her head, he sews it onto… his own mother’s body, to create a gruesome corpse puppet version of the Tattler sisters.

So Dandy is still obsessed with Bette and Dot, which is not good news for anyone related to the freak show. He jaunts over to their camp just to tell Jimmy that he’s decided to destroy him and everything he loves for taking the twins away from him.

This was unexpected and felt a bit out of character. But, if this is going to be a main plot device, at least it would connect the show’s main villain’s actions to the rest of the characters. This seemingly simple story principle has been oddly difficult for Freak Show to master, in both the Twisty era and the current Dandy one.

Then, someone named Angus, played by Malcolm-Jamal Warner of The Cosby Show fame, comes by asking for Desiree. Desiree tells Maggie he is her “beau.” And that is literally the only thing that happens concerning the character of Angus.

Walking away from this thrilling encounter, Desiree and Maggie stumble upon Jimmy having drunken sex with the fat lady, Barbara. Earlier, Jimmy told Barbara, while feeding her, “if you want it long and hard, I need it soft and wide.”

This is not the finest hour for a show that has, overall, done a pretty good job of humanizing individuals who are on the periphery of “normal” for one reason or another. Although the scene is not exactly played for laughs, there is an unmistakable subtext of “if Jimmy would have sex with her, something’s clearly not right.”

And indeed, Jimmy has been living in a drunken stupor following his mother Ethel’s tragic demise. An actual relationship with Barbara could have been interesting; her portrayal as an embarrassing low point on the way back to conventionally beautiful Maggie is not a great way to utilize the character, to say the least.

This seems to inspire Jimmy to shape up, and he runs out. Looks like things might work out for Jimmy after all. The same can’t be said for the women he left at the Tupperware party, as Dandy, having apparently spied him leaving, shows up immediately thereafter. He claims his car has broken down, is invited in, and quickly sets about doing what the title of the episode promised.

So what happened to those Tattler sisters, anyway? It turns out they’re hanging out at a motel in West Palm Beach, where Elsa and Stanley have convinced them that a surgeon specializing in separating conjoined twins is coming. Dot wants to do it and Bette doesn’t, which is once again one of the most emotionally affecting dynamics on the show.

Bette tearfully reminisces about how their mother refused to get them shoes with laces out of the belief that they’d never be able to master it; of course they did, along with needlepoint and who knows what other incredible feats of synchronicity. The point is, Bette doesn’t feel like she can live without her sister.

She knows Dot still aspires to live on her own; she also knows that, since they share two arms and two legs, there’s no real way either could have a “normal” life apart. So she tells Dot, “I would give my life so you could have one.” This amazing outpouring of love is enough to bring the stoic Dot to tears as well. It’s in this moment that Dot realizes she doesn’t want to live without Bette either, which, for me anyway, was a huge relief.

But enough with the feel-good moments. The aftermath of Dandy’s rampage at the Tupperware party is now on full display. The show continues to grossly overestimate the volume of blood in the Homo sapiens body, as a Dandy somehow squeezed enough out of a half-dozen or so women to fill an entire swimming pool, with enough left over to bring home for another bath.

Regina comes back, demanding an answer to where her mother is. We expect Dandy to evade the question once again. Instead, he happily declares, “I killed your mother!” And then he lets Regina go. This doesn’t appear to be the smartest move on Dandy’s part, but as we’ll see later, he has a (really stupid) plan.

We then start following Dell. Stanley, who has been blackmailing him with the threat of revealing that he’s gay, has continued to terrorize him even after he’s procured the “freak” body he wanted for the Morbidity Museum. He pulls out his penis, which is apparently gargantuan. “You should see it when it’s angry!” he says, followed by a disgusting pumping action/noise. “You’re a freak,” Dell says, amazed.

Dell is so disgusted with being tempted by this that he resolves to commit suicide. “I just can’t take the shame of it no more,” he writes, “being… what I am.” Like Jimmy did earlier, Dell then has a vision of his dead ex-wife Ethel. She points out that while being a “freak” like a bearded lady or lobster boy is something you can’t hide and just has to be accepted, Dell’s “freakishness” of being gay is one that he has kept on the inside forever, causing his entire being to rot.

I’ve found this season’s attempts to connect the plight of the freak show performers with that of discriminated-against groups to be heavy-handed at times, but this was surprisingly moving to me. Ghost Ethel’s point, of course, was not that homosexuality is really something that “rots” you – but that anything can be if you spend your life trying to deny who you are.

She’s not saying this to try to save Dell’s life, though – she makes it clear that she’s there to watch him do it. Not surprising given how abusive he’s been to those around him, which is inexcusable no matter what psychological factors motivated it. He tries to do it in an intense POV hanging scene, but the rope snaps at the last minute.

I can’t be the only one who was sorry that he didn’t succeed. Let’s not forget that this is the character who abused his wife, abandoned his son, assaulted Amazon Eve and murdered Ma Petite, and I for one am not particularly interested in being asked to accept a redemption arc for him.

Regina returns to Dandy’s house with a detective. It seems at first like Dandy has figured out some intricate way to defend himself. But instead, he again cheerfully confesses to his crimes. It turns out Dandy’s entire plan is: ca$h money. He tells the detective that, if he helps him, he will give him $1 million. The detective immediately shoots Regina in the head.

Let me say that again, in case it wasn’t clear. Dandy, a clearly mentally ill individual, tells the detective he can bribe him with a large amount of money. The detective does not demand the money before proceeding. The detective does not even ask for any sort of proof that Dandy has this money at all. He does not stop to consider for even a second that there might be resolutions to this scenario that do not involve the spontaneous murder of an innocent witness. He simply turns, shoots, and that’s that. If this season ofAmerican Horror Story has a jump the shark moment, I’m afraid that might be it.

Back at the freak show grounds, Jimmy is on another of his drunken rampages. He comes into his trailer, and suddenly Bette and Dot are there. Dot suddenly declares that she has loved Jimmy “since the first time I set eyes on you.” She’s offering herself sexually, which necessarily means she’s offering Bette as well, and it’s somewhat ambiguous whether Bette intends to be a casual observer or a secondary participant here.

It ends up being moot, because Jimmy says he is in love with someone else. I guess that means Maggie. It’s exhausting to keep up with all the characters Jimmy has sex with in a single episode. Anyway, this entire sequence was just really weird. Putting Dot in this position of being rejected after having a life-affirming revelation about her love for Bette felt very messy, from a narrative standpoint.

The show seemed initially to encourage us to feel like Dot’s worth would be affirmed by getting the guy despite her unusual situation, which is a highly questionable message. When she “fails” at this, one could be charitable and say that it emphasized that this isn’t all-important. But the show most definitely didn’t seem to be sending out that kind of vibe in the moment. So I just don’t know what to think.

The episode ends with the police coming, again, to arrest a freak, again, for a crime they didn’t commit, again. Dandy’s million dollar deal with the detective involved framing Jimmy. I didn’t like this plot the first time it happened with Meep, and to say I’m displeased with the show basically reusing it would be an understatement.

– Hey, remember in the first episode, when Elsa sees, during her musical performance, some kind of mysterious doppelganger of herself in a clown outfit, crying? Neither does the show. What the hell was that all about and why have they never returned to it?

– In this episode Dandy reveals the source of his family’s wealth: frozen foods. He says that his family still owns a hugely profitable frozen foods company, which is interesting because it implies that he has family other than the dead Gloria. Where are they in all this?

– Angus’ contribution to this episode was almost non-existent, but if he provides a plotline for Desiree, the show’s most criminally underused character, to be more involved with, it will be greatly appreciated.