The cupcakes are not delicious. 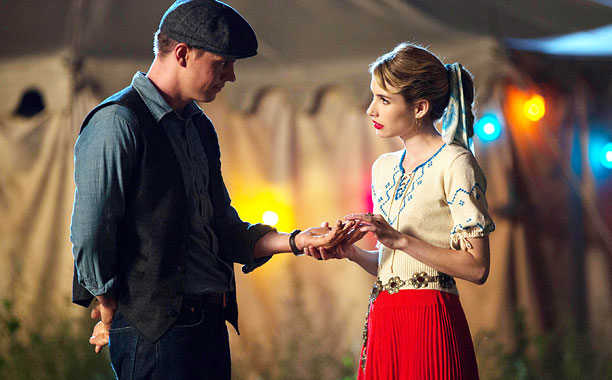 When “Pink Cupcakes” opens, we’re back in the American Morbidity Museum, which, as several commenters pointed out, is a real place, more or less – it’s just known as the Mütter Museum in real life. Is this a flashback to when Stanley and Esmeralda were there? No: It’s actually a vision of the future in which they’ve succeeded in bringing one of the Jupiter freak show performers’ bodies back there – for a price, of course.

As with all our recaps, the following contains spoilers.

In the present, the nefarious duo are debating the best course of action in a hotel room. Stanley is resolute, but Esmeralda is feeling iffy on the possibility of killing one of them. While they talk, Stanley absentmindedly knocks over his briefcase, out of which some gay magazines spill. Esmeralda warns him to be careful, saying “the only thing people hate more in Jupiter than freaks, are poofs.”

Really, though? The end of the last episode was clear about showing that the residents of Jupiter don’t hate the freaks at all anymore. Is the show going to completely forget that extremely corny scene, or is Esmeralda just behind the times? And while I have no doubt that anti-LGBT sentiment would be rampant in any American town in 1952, I found the usage to “poof” to be curious – am I wrong, or is that a distinctly British slur?

Back at the Mott house, Gloria is discovering Dandy’s work from the night before: the family’s housekeeper, Dora, lies dead on the kitchen floor. Dandy makes a show of being shocked; Gloria isn’t buying it for a second. There’s something very disturbing about her reaction to an act of killing committed by her son. She’s furious at him, but not at all disbelieving. Dandy’s capacity for murder is something she’s completely aware of – and prepared to help him cover up, albeit unhappily. “Just like everything else in your life,” she says, “I have to clean it up.”

Back under the big top, the freak show is performing its first sold out show in years, thanks to the aforementioned sappy outpouring of love due to Twisty’s capture in the previous episode. Beforehand, Stanley comes into Elsa’s tent, pretending to be a Hollywood talent agent and planning to take advantage of her aspirations to stardom. She’s ecstatic until he says he represents not a movie studio, but a TV network. Elsa would rather be boiled in oil than appear on that tiny black-and-white box, she says.

This is a rather odd statement from someone who pursues fame at all costs, but it does play into her fixation on the magic of the silver screen, which I maintain has been under-utilized as a motif this season. It’s also odd that Stanley doesn’t just tell her exactly what she wants to hear, since it’s all a con anyway.

Jimmy is nervous about performing in front of so many people, so Esmeralda comes by and tells him she can calm his nerves by reading his palm. Without bothering to pretend she’s thinking hard about this, she “predicts” that Jimmy will soon encounter a dangerous man (Stanley) and that he must leave immediately (so Stanley doesn’t kill him). Despite his ectrodactyly, Esmeralda says, he could “do anything he want[s].” Jimmy then leans in to kiss her, and she doesn’t reciprocate. “Except that, I guess.”

Jimmy must be determined to WooHoo one way or another right now, because in the very next scene, he suddenly starts kissing Desiree, who, in case you need a reminder, is his father Dell’s wife. Clearly, Desiree has not “felt something” in a very long time. But just as Jimmy starts his patented “flipper action” (which, as we saw in the season’s first episode, is so effective that housewives will pay good money for it), she starts bleeding heavily.

She heads to the doctor’s office for the first doctor’s visit in her life. It’s here that we finally get some background on her character, and it’s pretty fascinating. She was raised as a boy until puberty and has lived her life thinking she was intersex and has both male and female genitals. She doesn’t seem to have any particular theories about her third breast.

But the doctor reveals a cohesive explanation for every element of her unusual body. The blood was from a miscarriage, which Desiree thought was impossible. It turns out she’s not intersex – she’s “100 percent woman” but was born with a surplus of testosterone, which enlarged her clitoris enough to appear as a pseudo-penis. The third breast? That came about when her body tried to compensate by producing more estrogen.

The medical possibility of this is dubious to say the least, but the basic idea of all sex hormone levels rising when one does is valid, as users of anabolic steroids know. I found Desiree’s backstory to be a powerful twist on the “freak” narrative – her own body was as much a mystery to her as it was to anyone else. That could have been remedied at any point by a visit to a competent doctor, but it’s not hard to imagine why she didn’t feel comfortable with that idea until she absolutely had to.

At the performance, Elsa launches back into her signature song, “Life on Mars.” With a full house, she realizes what’s been clear to us for a while – she’s not nearly as talented or starworthy as she thinks, and the crowd’s boos make that crystal clear. The experience leads her to reconsider Stanley’s “offer” of a TV role. But it turns out he’s already found other stars/victims – Bette and Dot.

Stanley takes the twins out for a picnic and offers them pink cupcakes that he poisoned earlier. The ever-trusting Bette happily devours hers while the skeptical Dot refuses. Bette foams at the mouth; Dot says it “serves you right for being such a glutton.” Cut to one of the most demented images of the season thus far: Bette’s head with a sickly pallor, on the edge of death, while Dot’s, looking far healthier, screams in terror at the possibility of soon sharing a body with a corpse. Thankfully, we soon see that this is just Stanley’s optimal vision of the future; in reality, neither twin accepted the cupcake, and seem safe for now.

Meanwhile, Dandy is working out feverishly at his house wearing only white underwear, recalling another character whose accomplishments he’d certainly like to aspire to: Patrick Bateman in American Psycho. Indeed, Dandy’s statements rival Bateman’s in terms of insanity: “This body is America,” he declares, before adding that “I will be the U.S. Steel of murder.” The surprisingly-already-dead Twisty “was put on Earth to introduce me to the sweet language of murder.”

Dandy then heads to the local gay bar, for purposes that aren’t immediately apparent. Before we learn his intentions, we focus instead on Dell, who happens to be there at the same time. It’s all starting to make sense when it comes to Dell: perhaps we shouldn’t be surprised that a man who was married to one woman with a beard and another with (what appeared to be) a penis is in partial denial about his sexuality.

He is talking to an artist named Andy, played by Matt Bomer, who is an escort/prostitute. Dell declares that he loves him, which Andy is understandably uncomfortable about. It takes him a while to drop the truth hammer: Dell may believe they have something special, but for Andy, “I work here. When I’m here, I’m working.” Dell leaves angrily, and up sidles Dandy.

Dandy pays Andy to come to the romantic spot of… Twisty’s horrific school bus prison. “I’m not a fruit,” Dandy clarifies, though we get the sense that Andy hears this all day long from repressed men about to have sex with him. Dandy has a strange request: he says they should both take their clothes off with their backs to each other, then turn around, and “whatever magic happens, happens.”

The magic that happens is Dandy stabbing Andy to death, but not after Andy seems to come back to life and require more stabbing. Dandy launches into an unexpected Dexter-like clinical explanation of how to dispose of a murder victim’s segmented limbs. He cuts off Andy’s arm – and Andy appears to still be gasping for air.

What is going on here? Is Andy some kind of undead creature? The show didn’t explain beyond that, but I found it supremely creepy and I really hope that detail wasn’t just a throwaway. Given Dell’s relationship with him, I’m pretty sure we’ll be hearing more about Andy, so I’m hopeful.

Without knowing what happened to Andy at the moment, Dell stumbles home to Desiree, who informs him that she’s not intersex after all, and that they can have a baby. Dell clearly doesn’t enjoy this news, and Desiree knows it. Desiree doesn’t really care: she tells Dell that the doctor can perform a procedure to reduce the size of her clitoris to a more average size, and once that happens, “I’ll be too much woman for you anyway.”

Dell’s reaction to this? Paying a visit to the surgeon and brutally breaking all his fingers so he can’t perform the operation. And also threatening the surgeon’s grandchildren, just in case. Dandy has obviously become villain No. 1 in the story, but Dell is firmly in the “bad guy” camp at this point as well.

The final scene sees Elsa, who tricked the twins into thinking she was taking them to a seamstress, to get fitted for new clothes for their “TV show,” bringing them to Dandy’s house. How Elsa knew where Dandy lives is a mystery, but the least we can say for her is that she thinks he’s just a spoiled man-child who wanted to “own” the twins – I’m guessing Dandy’s murderous tendencies are going to rack Elsa with guilt once she learns of them.

– Coven veteran Gabourey Sidibe showed up in this episode as Dora’s daughter, talking to Gloria and wondering where her mother is. The conversation featured one of the more hilariously exposition-heavy lines I’ve heard in a while: “I’m really enjoying my time at the Barbizon Secretary School in New York City!”

– Sidibe’s character in Coven was called Queenie; her Freak Show character is called Regina, which means queen in Latin.

– Desiree’s birth name was Derek; she was named after her father, who is described as a baseball player. As a former baseball blogger who just endured a year of endless excessive praise of Derek Jeter, seeing what was almost certainly another Jeter reference on one of my favorite non-baseball sanctuaries was certainly not a pleasant experience.

–  Gloria rationalizes Dandy’s murderous nature by implying that all serial killers are affluent, which is obviously untrue, but does align with her myopic view of the world. She says “even Jack the Ripper was a Windsor,” referencing the hypothesis that the Whitechapel murders were carried out by Prince Albert Victor, Queen Victoria’s grandson.

– This episode featured not one but two David Bowie songs: Elsa performing “Life on Mars” again, and a non-diegetic appearance from “Fame.” Bryan Ferry’s “Slave to Love” also appeared, though I personally don’t believe soundtrack music should be included in the anachronism-meter.