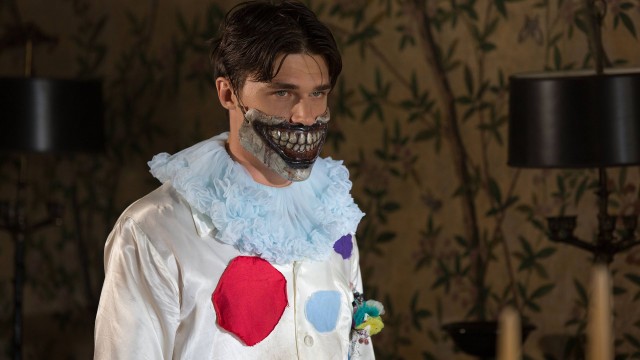 When we last left two-faced ghost/Dickens cosplayer/green smoke monster Edward Mordrake, he was determining that Ethel was not the “true freak” he’d come to the Jupiter freak show to find and take back to Hell with him. So who’s it going to be? Turns out we do have a little bit of the identity-based mystery that I said felt lacking in my last recap.

The next two interviewees are Legless Suzi and Paul the Illustrated Seal. Mordrake’s criteria for “true freak” are a bit hazy, but it seems he wants someone who hides a secret shame. Suzi has definitely got that: after explaining how her legs were amputated at age 2, followed by being abandoned by her parents, we’re abruptly informed that she also once murdered a fellow hobo out of the jealousy she felt watching him dance.

That’s pretty shameful if you ask me, but Mordrake isn’t satisfied. Paul isn’t going to give him much, though – the most shameful thing in his life is not completing his full-body tattoo design by covering his face. Had his handsomeness come packaged in a standard body, he says, he “could have ruled the world!”

That might be a bit of an exaggeration, but the charismatic yet melancholic performance of Mat Fraser in this scene is worthy of note. Fraser, a rock drummer, martial artist, freak show scholar and person who says “I’m really good at shaggin’!” without irony, is a fascinating individual and really deserves to be one of the breakout stars of the season.

When Mordrake moves on to Elsa’s tent, her reaction is bizarre: Despite his Victorian outfit and his zombie entourage, she thinks he’s a talent scout who’s come to make her a star. Of course, Elsa probably thinks that about everyone. Mordrake is angry that she doesn’t recognize him; part of the reason Elsa refuses to believe he’d visit her is that she thinks no one knows her secret – that both her legs are prosthetic. She screams “I am not one of them!” as Mordrake’s minions pulls them off. Elsa pretends to be a “zookeeper,” Mordrake says, when she is “a pernicious diseased animal” herself.

That sounds harsh to say about a disability, but we soon realize he’s not talking about her legs. I hope anyone who watched the subsequent black-and-white flashback to 1932 Berlin did so on an empty stomach. It was a time of “sexual chaos,” Elsa tells us, as the camera zooms in on a woman urinating into a teacup. Elsa, who at the time was rocking a ’00s Lady Gaga-style blonde banged look, is shown as a professional domme who orders a client to sit down on a toilet seat with an array of nails sticking out of it, producing a revolting squiiiiiish sound effect.

Her deceitful filmmaking partners decided, without telling her of course, that she’d be perfect to star in a snuff film. A snuff film, if you don’t know, is a film in which an actual murder is depicted. They’ve been the subject of rumors for decades; according to Snopes, they’re a complete myth. But since more than half of all films made before 1950 are lost, who’s to say really?

Anyway, as for why the filmmakers decided to kill her on screen if she was such a star: I have no idea. The possibility that she was never actually a star at all, but really just an unreliable narrator, is eminently plausible. Either way, Elsa did manage to get away with her life, but not her legs. At this point, Mordrake’s demon face whispers “she is the one.” Mordrake is about to kill her to take her to Hell, which Elsa appears wildly enthusiastic about, but he’s interrupted by a blast of music box-style music.

Nearby, Dandy is putting on some kind of a makeshift circus in front of the kids Twisty has kidnapped; Twisty, having finally seemed to accept Dandy as a fellow evildoer, is playing a toy piano and enjoying himself immensely.

Jimmy and Esmeralda, who ran across this twisted performance when their motorcycle ran out of gas in an inopportune spot, are being held captive as well. Esmeralda is about to get sawed in half by Dandy; Jimmy manages to wriggle free of his restraints and stop Dandy just in time in an annoyingly damsel-in-distress-type scenario. As they run away, Dandy yells, “you ruined my Halloween, you stupid girl!” and continues to be a completely inhuman character. Dandy runs away as well, leaving only Twisty to be confronted by Mordrake.

Now comes the time to learn just what the deal is with this Twisty guy, who up until now has had absolutely no character development other than “murderous clown.” Nine years ago, Twisty was a clown of the non-murderous kind, happily entertaining children at a circus. He is clearly a bit mentally disabled, what back then was sometimes known as a “simpleton.”

At the circus, he’s treated horribly by freak show performers, who scare him into thinking cops are coming for him on a molestation accusation. He runs away and slowly devolves into the filthy, deranged monster he’s become. It began as he tried to sell weird garbage-made toys to a toy store (met with understandable rejection) and continued as he began murdering parents and kidnapping their children out of a belief that he was “saving” them. As for his missing jaw? That came about after a misaligned suicide attempt.

A lot about this doesn’t make sense – for one thing, he’s shown to despise freak show performers due to the cruel bunch of them that callously forced him from the circus. But the relevance of that fact is perplexing – despite the freak show being in town, despite the entire damn show being about them, Twisty basically never interacts with them at all! The entire show seemed to be headed toward a union of the freak show and Twisty storylines that apparently will never happen.

Because, Mordrake has finally found his “true freak.” He says he’s met many craven killers, but none who, like Twisty, could not even admit their evil. Mordrake’s demon face – the same one who smiled gleefully at their own execution by hanging – is so moved/disturbed by Twisty that it starts crying. Mordrake stabs Twisty to death, and Twisty’s ghost, with his jaw restored like Anakin’s young Hayden Christiansen body in the Return of the Jedi Blu-ray, joins the ghostly freak show crew to head to Hell. I guess Twisty only hates living freaks?

With the kidnapped children returned to their parents, the freak show, and Jimmy in particular, are now heroes all of a sudden. A group of townspeople, who in previous episodes had shown to be unfailingly discriminatory toward the performers, arrive to pay their thanks. They now have no hesitation at all about being accepting and friendly to them, and it’s all extremely corny and fake-feeling. It’s highlighted by the moment when Elsa’s announcement that tickets to tonight’s show are available is greeted with an inexplicable round of applause.

Finally, we’re back in Mott Manor where Dandy has brought Twisty’s mask – the same one that had been resting on an unwashed maggot-infested permanently open jaw wound for years – and is happily wearing it. His family’s housekeeper Dora stands up to him as she always does (unlike his mom), but this time, he actually kills her, and there’s no doubt who the new villain of Freak Show is.

– So Twisty is just … gone? Everything about the character suggested he was a “big bad” who’d slowly develop over the course of the whole season. I’m pretty shocked that he’s dead with more than 2/3 of the story yet to be told. Dandy as the main villain seems like a dicey proposition to me, and I’m hoping there’s more villainous surprises in store to assist in that department.

– Angela Bassett’s Desiree has basically been, thus far, not a character at all. If something doesn’t change drastically I’m going to chalk this up as an enormous waste of Bassett’s star potential.

– I’ve gotten so used to the weekly musical performance that part of me lamented its absence in this one. When are we getting a cabaret-style rendition of Get Ur Freak On?

– Wes Bentley’s accent as Mordrake was absurdly bad, like an all-star team of badly-done accents (English, French, eastern European of some sort) mashed into one.

– Paul is shown to have been obsessed with the magic of the movies as a young man. If you’re counting, that’s now at least three characters who this trait has been associated with (along with Elsa and Bette). I’d love to see the show dive even deeper into the mystery of the cinema – the snuff film sequence, as horrifying as it was, played into that.