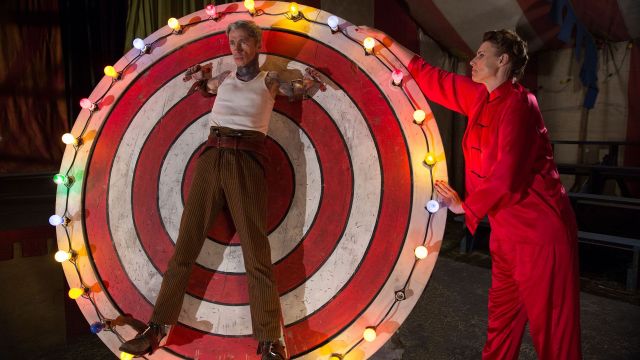 At the home of Dandy Mott and his mother Gloria, a new maid is serving lunch. “I liked Dora better,” Dandy says, referring to the housekeeper that he murdered two episodes ago. “Well, hindsight is 20/20, dear,” comes his mother’s reply. Welcome to the twisted world of the Motts, where killing is chillingly normal, and has been for several generations.

Gloria also has a gift for her son: a lidded food platter filled with condoms. Elsa brought conjoined twins Bette and Dot to the Mott house in the final scene of the last episode with wicked intentions, and a whole lot seems to have happened since then. Dandy says he’s now in love with them, and in fact plans to marry them (legally? How?) but that “I would never violate those girls.”

Meanwhile, it’s Elsa’s “birthday week” back at the freak show grounds. The performers are waiting in line to give her gifts like she’s some kind of Renaissance-era monarch. Despite the (forced) festivity of the event, everyone is concerned about the twins’ disappearance. Elsa claims that she took “that ungrateful hydra” dress shopping only for them to run away, but no one seems to buy it. Reading the nervous skepticism on her employees’ faces, she screams, “I demand that you start having fun this instant!”

And then, all of a sudden, Elsa is in bed with Paul the Illustrated Seal. Whoa. I guess the show’s writers took Mat Fraser’s claim of being “really good at shaggin’” seriously. We learn this has been going on for a while in secret. Elsa floats the idea of possibly even bringing him with her when she heads to Hollywood, suggesting that “when I have a normal suitor” Paul could pretend to be the chauffeur. For someone who lives her entire life around people with unusual bodies, she sure can still be callous about it sometimes.

The shaggin’ doesn’t stop for Paul, who heads, in the very next scene, to a rendezvous at the house of Penny, the candy striper from episode one who hasn’t been seen since. Penny (played by Grace Gummer) was drugged, videotaped in the midst of an orgy, and then shamed into silence as part of a blackmail scheme in what was certainly the most problematic scene of the season. She had disappeared since then, but now she’s back, and apparently carrying on an affair with Paul. Where this storyline is going is a mystery, but we do know she lives with an abusive, controlling father whom she’s trying to defy.

Back at the Mott house, Bette and Dot are once again writing in their diaries and expressing quite different perspectives on their current situation. “Happiness is too small a word” for how Bette feels; she reciprocates Dandy’s professions of love. Dot doesn’t, of course; she (very reasonably) has “to wonder what dark intentions await.”

Dandy is reading in the paper about a pair of conjoined twin baby boys being separated, which makes Dot’s ears prick up. The case in question, that of the Brodie brothers, was real news in 1952, although the show’s presentation of this as the first ever separation is inaccurate – it was the first separation of twins conjoined at the head, which of course bears little resemblance to Bette and Dot’s situation. (The first known successful separation of twins conjoined at the abdomen actually happened all the way back in 1689.)

It’s not clear how a potential separation of Bette and Dot would work, given they share two arms and two legs, but we know how Dot would like it: with her keeping all those limbs, and Bette getting none. Dot has a vision of her in this state, and encountering Jimmy in a diner. Dot is perversely encouraged when she reads further about the Brodie twins, including the true-to-life detail that one of them did not survive the operation. Bette is hesitant either way: She feels that “science should never subvert the will of God.” To which Dot asks whether they are “God’s will, or God’s cruel joke?”

The Tattler sisters’ absence from the freak show presents a problem for Esmeralda and Stanley: They’re going to have to go to a plan B for someone to abduct and sell to the American Morbidity Museum. Stanley’s new idea is to capture Jimmy and cut off his claw-like hands. Esmeralda dissuades him because of “how messy that would be,” and suggests they instead take Elsa’s two-foot-tall assistant, “Ma Petite.” Stanley, who has a disturbingly vivid imagination that we’ve seen into a lot lately, then envisions her being drowned in a jar of formaldehyde.

After being musical number-free for two episodes, we then return to American Horror StorGlee as Elsa sings the pop standard “September Song” with only Paul in the room. For the record, this marks the first song selection that could have actually existed in the ’50s. After the performance, Paul leans in to kiss her, but Elsa can smell the perfume of another woman (Penny). Her resulting fight with Paul segues awkwardly into being about Bette and Dot’s disappearance. “The general consensus,” he says, “is you’ve done something nefarious with those girls.”

This (correct) supposition enrages Elsa, as she demands that all the performers wake up to hear her rant against them. She begins by destroying their presents; in a possibly unintentional moment of hilarity, she screams that one is “SHABBILY MADE!” She asks how everyone can be untrusting of her after she “saved” them all. They ask how they can prove their loyalty, which gives Elsa the worst idea ever: She demands one of them get on the spinning bullseye of the episode’s title so that she can demonstrate her knife-throwing prowess.

Paul, foolishly, volunteers. At first it looks like Elsa’s knife skills are a good deal more impressive than her singing. But then, of course, she nails him in the stomach, which was probably intentional. Elsa says she’ll call an ambulance, but doesn’t. “I would not shed a tear if you were to die,” she whispers to him, “not because you’re a freak, but because you betrayed me.” On cue, the person with whom Paul committed the supposed betrayal, Penny, busts in, and is presumably going to get him some medical attention.

Concurrently, Esmeralda has woken Ma Petite up and leads her to a shed where she’s set up a jar, just like in Stanley’s vision. Ma Petite gladly gets in the jar, saying she feels like a butterfly. To drive the point home, she flaps her arms like wings. This is cute enough to cause Esmeralda to abort her mission, and the two end up hunting for fireflies instead in one of the more anticlimactic sequences in AHS history.

Esmeralda isn’t going to kill Ma Petite, and she certainly is not going to kill Jimmy; to escape her life of crime with Stanley, she tells Jimmy she wants to run away with him, and kisses him. Jimmy appears willing, but says there’s one thing he has to do before they go. As Esmeralda waits, Stanley suddenly shows up in her tent, and angrily insists she must get Jimmy’s hands – today.

Back at the Mott mansion, the twins are on a walk around the grounds, and Gloria enters Dandy’s room by saying “I brought you snackies!” Dandy doesn’t want snackies, though; he’s distraught after reading Dot’s diary, in which she says she would rather die than kiss him. At this moment, Dandy’s misbegotten attempt to be a lover seems to erode instantly; he’s back to his essence, which is that of a dastardly murderer.

In an out-of-nowhere but intriguing monologue, Dandy says he feels, on the inside, like the time he had tuberculosis and was brought to the Utah desert to recover. “The desert has no mercy,” he says; anything you try to plant in the desert dies. “I know why I was put here, mother. My purpose is to bring death.” I have to admit that, while I was skeptical at first, Dandy is looking more than capable of inhabiting a seriously villainous role in this series.

– This might be completely offbase, but I’m starting to feel like the identity of Dandy’s father is going to be a big reveal at some point. We know he had the same murderous inclinations as Dandy, but there is precious little information about him, other than the fact that he hanged himself on a Japanese maple, which probably places the location of his suicide somewhere other than south Florida.

– This series has done a great job humanizing several of its unusual-bodied characters (especially Paul), but it’s completely failed in regards to Ma Petite. In this video, the actress Jyoti Amge says she doesn’t like to be picked up like a baby. Then why is her character treated like one at every possible turn? Elsa sleeps while holding her like a stuffed animal, she’s utterly naïve about Esmeralda’s intentions when she’s kidnapped, and she doesn’t even have a real non-pet name as far as we know. It’s a really lazy, disappointing choice in my opinion. I’d contrast this with the dwarf character Samson from Carnivale, who is the carnival’s manager and elder statesman.

– In this episode we learn the other little person in the troupe is called “Toulouse,” which is undoubtedly a reference to post-impressionist master Henri Toulouse-Lautrec, who was a dwarf.

– Dandy refers to his family’s cook as “Cook.” Definitely seems like something he would do.

– Another robot sighting, this time on a movie screen playing The Day the Earth Stood Still. If season 5 doesn’t have a sci-fi horror theme of some sort, this will be a pretty large coincidence. Ryan Murphy claimed that the top hats seen on coffee cups are a clue as well. Hmm… top hats plus robots… steampunk?