Things are getting a bit kill-y. 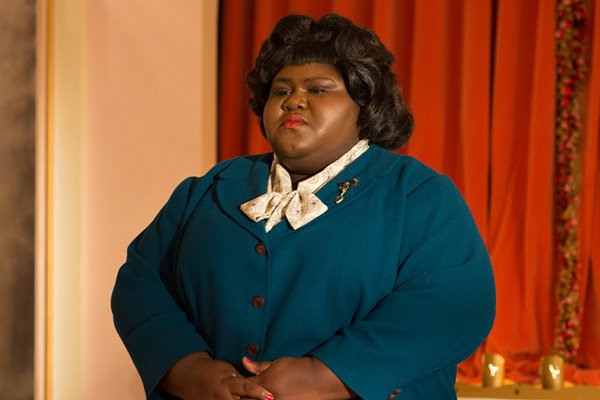 Gloria Mott’s entire life revolves around her son. That doesn’t change in the opening scene of “Blood Bath,” but for the first time we see her doing something for her own psyche, albeit as it relates to Dandy. She’s lying on a therapist’s couch, cigarette in hand, discussing her (quite well-founded) suspicions that her son is a murderous psychopath.

Like many budding serial killers, we learn Dandy happily killed animals as a child. “I always thought of him as a foreigner,” she says, momentarily giving credence to the theory that his father was a Nazi – but as I’ll explain later, subsequent revelations in this episode make that unlikely.

Meanwhile, the freak show performers are searching (once again) for a missing comrade. This time it’s Mahadevi “Ma Petite” Patel, who was brutally crushed by Dell in the previous episode. When the crew finds (presumably planted) evidence that she was carried off by an animal, Elsa is inconsolable in a way that she certainly wasn’t about the others who’ve died or mysteriously disappeared on her watch.

Perhaps it makes sense – Ma Petite was her personal assistant after all. But Ethel is not buying Elsa’s tears. “That was quite a show you put on in that tent,” she says, “a regular Joan Fontaine.” (Since Fontaine was a bigger deal in the late ’30s and early ’40s than 1952, I took that line as a clever reminder that most of the freak show is trying to hang on to past glory.)

Elsa goes into a rage, insisting that Ma Petite was “my most precious one.” Ethel’s harsh-but-accurate comeback is “the most precious for you is the roar of the crowd.” The situation escalates quickly as Ethel threatens to kill both Elsa and herself with a pistol; she ends up shooting through Elsa’s prosthetic leg before Elsa kills Ethel with a cocktail ice chisel to the head.

The general plot points visited in this sequence may have made sense – Ethel always seemed better than the rest at seeing Elsa for who she really is, and Elsa’s combustible personality always seemed likely to lead to her oldest friend’s downfall for that reason – but the details of how it happened were maddeningly sloppy and unsatisfying. Let’s break down all the wrongness this scene contained:

Anyway, I’m sad to see Ethel go – I felt Kathy Bates was turning in the best performance of the season. I’d be lying if I said I wasn’t rooting for Elsa to be the one to die. As for consequences arising from Ethel’s murder? It doesn’t seem like there will be any, at least in the short term. Stanley and Maggie help Elsa create the impression of a suicidal one-car crash – a favor that I have to imagine will come back up the next time Stanley tries to convince Elsa to do something.

Back at the Motts’ house, Regina, the daughter of the housekeeper Dandy murdered, finally shows up to ask where her mother is. Dandy all but laughs in Gloria’s face, insisting that it’s her job to conceal the crime he committed – a rather terrifying example of his confidence in his own villainy. In fact, he tries to goad his mother into killing Regina, saying that if she causes him to be sent to the electric chair, “I’m taking you with me to sit on my lap.”

Which is probably why Elsa eats a Baby Ruth bar in front of Barbara, emphasizing that at her freak show she can eat as much as she wants and live in “a place where every pound of that glorious jiggle can be loved and celebrated.” It seems that Barbara/Ima is going to become a more important character – next week’s episode is titled “The Fat Lady Sings.”

Everyone else attends Ethel’s funeral, and the end of the somber ceremony segues, for reasons that I don’t understand, into a resolution to punish Penny’s father for disfiguring her for life. The transition is supremely awkward, but that’s not to say I don’t support the idea. Penny (who’s now going by “the Astounding Lizard Girl”), Desiree, Eve, and Suzi form an impromptu hit squad, who head right over to his house.

They kidnap him, tar and feather him, and are about to cut off his penis when Maggie busts in, imploring them to have mercy, because… wait… why exactly? Isn’t this the same woman who earlier participated in covering up the murder of Ethel, the freak show’s most righteous character? Somehow her plea works, and Penny lets her dad off with basically just a warning that she’ll kill him if he ever comes after her.

Of course, he wasn’t coming after her anyway – his whole plan was to disown her. This all felt like something of a cheat. Why is the father shown to perform a shockingly depraved act on the daughter, while when the daughter sets out to exact revenge, she shows restraint? It seemed like the show was asking for us to feel good simply that she was able to scare him. But that feels kind of un-American Horror Story to me.

We’ve heard before that the Mott family has seen its share of in-breeding, which, it is suggested, might explain its members’ murderous tendencies. The conclusion of this episode promises to reveal more detail about Dandy’s mysterious father. “Dora told me everything when I was five,” Dandy says. So did Gloria mate with… her brother? Her father? Herself, through an asexual mechanism implanted after an alien abduction? It turns out the freakish truth about her husband is that he was… wait for it… her second cousin.

Now, I’m not a fertility scientist. And it’s not like I’m running out to marry a second cousin myself or anything. But when it comes down to it, reproducing with a second cousin is really not that big a deal, either legally (it’s allowed, today, in all 50 states) or genetically (second cousins only share 3.12 percent of their genes, making the increased chance of birth defects negligible). So if AHS was trying to creep us out with this, I think they could do better.

It also obviates some of the juicier theories about Dandy’s parentage – if his father was also a patrician Mott, it’s unlikely he was a Nazi war criminal, which would make Dandy’s ownership of an SS dagger a red herring. And we still don’t know the circumstances of his father’s hanging suicide from a Japanese maple.

It might all be worth it though for when Dandy says “you’re no better than the Roosevelts” (Eleanor and Franklin were fifth cousins, once removed) and Gloria responds “how dare you say that name in this house!” Dandy threatens to shoot himself in the head, to which Gloria says, “I can’t go on without you.” Dandy’s response is to shoot Gloria in the head.

The final scene of the episode shows Dandy bathing in the blood of the mother whose entire life was devoted to serving him. Remember when I was concerned that Twisty was going to be so completely evil to scarcely seem human? Turns out I was right this season would include a character like that – I just didn’t realize it would actually be Dandy.

– Dr. Feinbloom, the therapist whom both Gloria and Dandy talk to in this episode, was never actually seen. We only hear his voice and see the back of his chair, Dr. Claw-style. It’s hard to imagine that this would have been done without any bigger reason, but I’m at a loss to guess what that could be.

– The Tattler sisters aren’t seen at all in this episode. Elsa defends herself from Ethel suggesting she killed them by saying “I put them on a bus to Tampa, although to me, death would be preferable to Tampa.” I have nothing against the city of Tampa, but that was hilarious.

– Although I wouldn’t bet on it being more than a throwaway line, it’s also possible that Elsa was referring to the town of Gibsonton, a Tampa suburb that was once known as a winter/retirement home for circus freaks. I’m actually quite surprised that Gibsonton hasn’t been mentioned once.

– Does anyone have any idea what the song Penny’s father was listening to when she and her co-conspirators break in? It sounded like it could have been from the ’40s or ’50s and contained the almost comically appropriate refrain of “don’t you dare call me Daddy again.” But Google isn’t turning anything up at all on it for me.