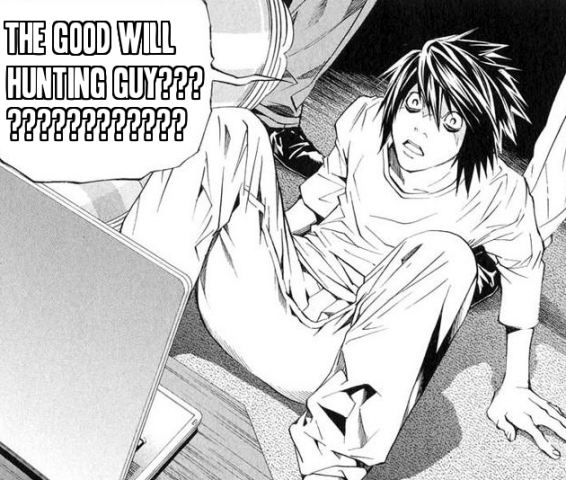 Geez, what is up with Japanese  franchises getting turned into Hollywood movies by Academy Award nominated directors lately? First we had Spike Lee and Oldboy (the 2003 Park Chan-wook was inspired by a late ’90s manga of the same name), and now according to rumors, Gus Van Sant is going to do Death Note. Huh. How do you like them apples, Ryuk?

For those who aren’t in the know, Death Note was a mid ’00s manga about a high school student who finds a notebook that, if you write a person’s name on it, will kill that person. Naturally, he decides to become a vigilante serial killer, which prompts Interpol to bring in a super-genius mystery detective to stop him, and it becomes a very intense Holmes vs. Moriarty-style showdown. While the story gets a bit convoluted in the second half if you ask me, the concept and characters were compelling enough to sell 25 million copies and warrant an anime adaptation (fun fact! In the English dub, L’s voice is done by the actor who played Gaeta in Battlestar Galactica), an abridged movie, two live-action Japanese films, and even a video game.

An American adaptation of the series has been in the works for a while now, but according to a website called The Tracking Board (which I had never heard of before now, so take this rumor with a serious grain of salt), the acclaimed director has been asked to take over for Iron Man 3’s Shane Black. Black has been attached to the project since 2013 and wrote the most recent iteration of the script, along with Anthony Bagarozzi and Charles Mondry.

If this rumor turns out to be true, then it won’t be Van Sant’s first foray into thriller territory: he also directed  To Die For, about a news anchor who manipulates teenagers into committing murder to get ahead in her career, and Paranoid Park, the story of high school student who covers up an accidental manslaughter to keep from facing the consequences. If you combine the two, it all sounds pretty Death Note-y. Oh, and I guess there was that Psycho remake, too. Let’s just… not talk about that.