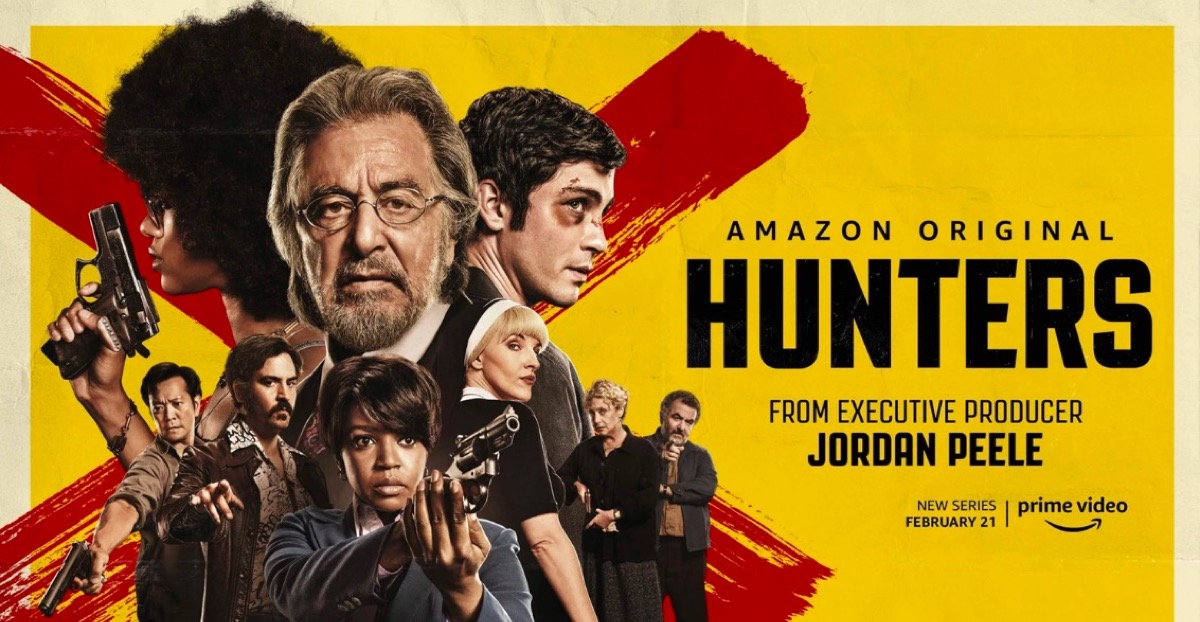 NASA’s not necessarily proud of every one of its unsung space pioneers—particularly the Nazis. That’s right. Nazis got us to the moon. Former Nazi party members and high ranking officials were recruited by Uncle Sam, given employment, and forgiven for their war crimes all to boost our progress in the space race—and that’s not all.

This was a fact I didn’t know until I watched Amazon’s Hunters, a new series that follows a group of Nazi hunters who track down Nazis living in U.S. While the series is a fictional retelling of the atrocities of the Holocaust and the years following the war, it explains a relatively unknown part of American history and its relationship with Nazism, holding a mirror up to the current state of American society.

The line between hero and villain can be hard to define. Both a hero and a villain can commit murder, but on one side it’s justice, while on the other, it’s criminal. In Hunters, FBI Agent Morris says, “Monsters can be little. Monsters can be old. They can be us.”

After seeing Star Wars for the first time, Logan Lerman’s Jonah and his friends discuss Darth Vader, his morality, and whether or not he’s truly a villain. Jonah explains that Vader doesn’t wake up in the morning wanting to destroy the galaxy; he gets up believing he can save it.

Jonah’s friends point out that, despite Vader’s beliefs, he’s still a murderer, and Jonah is quick to point out that so are his favorite comic book “heroes”: Batman crushed a guy’s guts with a car compactor; Superman slaughtered cities; Green Lantern took out a planet. “The only difference between a hero and a villain is who sells more costumes on Halloween.”

In school, I learned about WWII and the Holocaust, how the Germans slaughtered millions of Jewish people, people of color, gay people, and more all across Europe, and how the Allies swooped in and saved the day. My education on the war ended with this victory and the Nuremberg trials that served as a symbol for justice, but as Hunters explains, the “heroes” were content to sacrifice that justice for their own benefit.

In 2018, The Washington Post reported on a study that shows that two-thirds of American millennials don’t know what Auschwitz is. That same study, conducted through interviews by the Conference on Jewish Material Claims Against Germany, shows that 22% of millennials say that they haven’t heard of the Holocaust. Perhaps this is just my Canadian education talking, but it’s absolutely shocking that those of my generation wouldn’t know of the genocide that killed approximately six million Jews and 11 million others.

This emphasizes one of two main reasons why David Weil’s new series is an incredibly important piece of television right now. Weil grew up Jewish and learned about his people’s tragic history through the tales of his Holocaust survivor grandmother. In an interview with Variety, the series creator states that he feels a responsibility to continue telling her story, a responsibility that heavily weighs on the audience while watching Hunters.

Many of the show’s characters have ties to the Holocaust, as survivors or as someone who knows a survivor. Their stories about their time in Auschwitz, specifically, are told in flashbacks (or in one episode, beautiful animation) throughout the series. While these tales aren’t without their liberties taken or criticism deserved, they emphasize a simple fact: We must know and must not forget what happened during the Holocaust. Even when there are no survivors left to tell their stories, we must continue in their place. 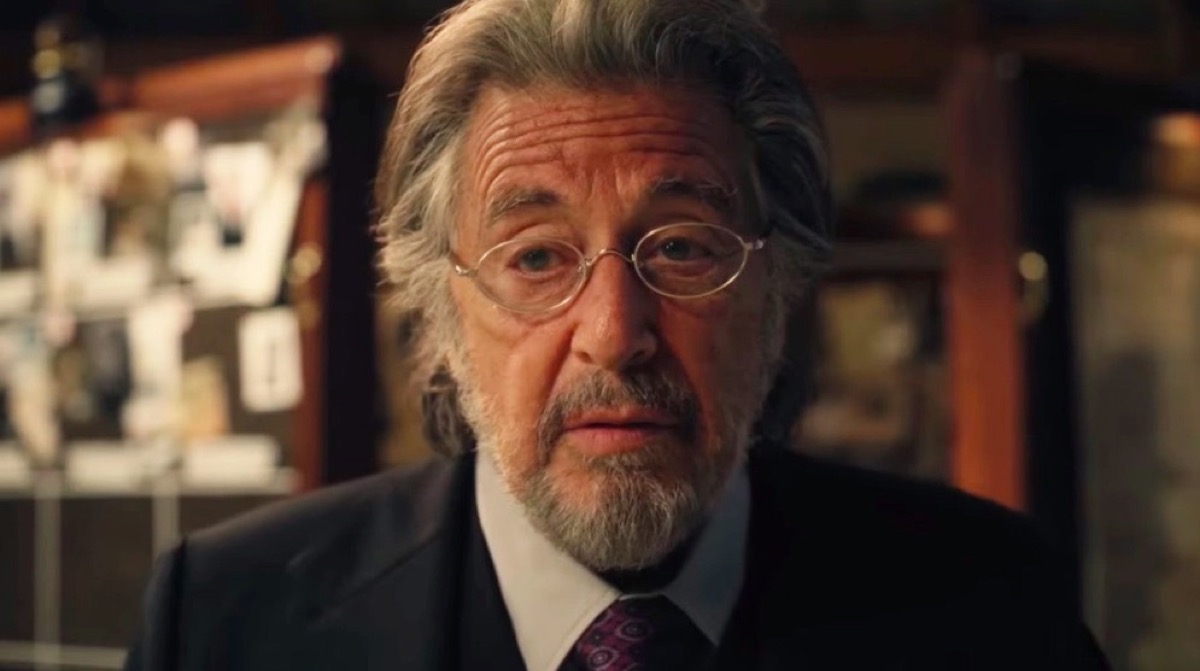 As Al Pacino’s character, Meyer Offerman, says, “Let them know: Not again. No more.” The same respondents in the above study state that, while they are ignorant of the events of WWII, they are aware that anti-Semitism plagues Jews even today in America, and that neo-Nazism is present and growing rapidly. Weil himself explains that Hunters is meant to draw parallels between Europe in the ‘40s and the state of America today, with “the racism and anti-Semitism and xenophobia, the likes of which we haven’t seen in decades.”

For many, their education on WWII (if they had any at all) has been extremely limited because, speaking for myself, we walk out of those classes in high school with the naive belief that the ideology of Nazism seemingly evaporated once they lost the war. And while schools will now, hopefully, include the events of Charlottesville and other crimes of neo-Nazi violence into their curriculum to show that falsity, one thing that we never learned was that Nazism and some of the people who wore it on their arm as a swastika were welcomed to America with open arms.

Nuremberg has often been regarded as justice served, but out of the millions of Nazis who committed atrocities during the war, only 12 were sentenced to death by Allied forces. What happened to the others? Well, that’s the hard truth that Hunters wants us to know—a truth, a crime that for some reason isn’t widely discussed. While Holocaust survivors traveled to America for a better life, the Nazis who tortured them and killed their families followed behind.

Many of these Nazis didn’t need to sneak in under false passports. No, they were invited. These war criminals were welcomed. In Hunters, as FBI Agent Morris begins to realize that the bodies on the murder trail she follows belong to Nazis, she is given a name: Operation Paperclip. This secret program executed by intelligence agencies in the United States recruited Nazi party members and leaders and gave them employment in America.

Roughly 1,600 Nazi scientists and engineers were hired for the sole purpose of using their intellect to develop rockets and biological and chemical weapons to protect the U.S. during Cold War tensions with the Soviet Union. Winning the Space Race was also a motivator, as aerospace engineers like Wernher von Braun helped us get to the moon, while another German rocket scientist for Nazi Germany, Kurt H. Debus, became the first director of NASA’s Launch Operations Center.

According to the History channel, the war crimes of men like von Braun (who developed the V-2 rocket that the Nazis used against England during the war) were simply ignored and eliminated from their records. Hunters shows how all these men managed to live under America’s very nose. Changing their names, they lived relatively peaceful lives.

They were neighbors, husbands or wives, mothers or fathers. They lived in wealth, hid the belongings they stole from Jews in American banks, worked for the country’s biggest institutions, and even became politicians. “There are no soldiers or saints,” Agent Morris’s boss tells her, “just janitors.” The American government kept the recruitment of these men a secret, swept their crimes under the rug, and as a result, their ideology walked right through America’s door.

The Nazi hunters depicted in Amazon’s latest hit series are fictional Holocaust survivors and allies but represent the web of Nazi hunters that did once exist and still do. While, in the show, they get justice in vigilante-style, the real American Nazi hunters sought justice through documentation, arrest, and prosecution.

In the U.S., this fight is represented by the Simon Wiesenthal Center. Wiesenthal, who died in 2005, was an Austrian Holocaust survivor who spent his post-war life gathering information and tracking down Nazi war criminals so they could be brought to trial, something the Americans failed to do more of with Nuremberg. Wiesenthal helped track down and bring justice to high ranking commanders, medical officers, sadistic camp guards, and more.

Despite his death, his legacy continues as the Center coordinates research worldwide to try to identify the Nazis who are still alive. On their list of most wanted, approximately 12 of the Third Reich’s most dangerous resided in the United States and Canada for decades, with over 2,000 other members somehow obtaining Canadian citizenship without suspicion.

Weil explains that the horrors of the war are hard to understand, and what happened afterward might just be even harder to comprehend. We failed to confront the terrible truths of America’s past for the sake of patriotism, and in doing so, the saying of “never again” lost its meaning.

“I am forced to look out for emigration and as far as I can see [the] U.S.A. is the only country we could go to,” Anne Frank’s father, Otto, once wrote. Thousands of Jewish refugees being turned away by the U.S. (and even Canada) is a pattern that is once again repeating itself with the Syrian refugee crisis and the current state along the Mexican border.

The treatment of asylum seekers along the U.S.-Mexico border is eerily similar to what was seen over 70 years ago: People are being separated from their families and put into camps without basic necessities and are at risk of extortion, kidnapping, and other forms of violence. Nazis were invited to the country because they had something to offer, and America had something to gain. Hunters illustrates how America holds the same warped sense of morality as their enemies, but are somehow still perceived as the “good guys.”

America allowed the cycle to repeat itself, and now, our cries of “never again” are drowned out by nationalists holding torches.