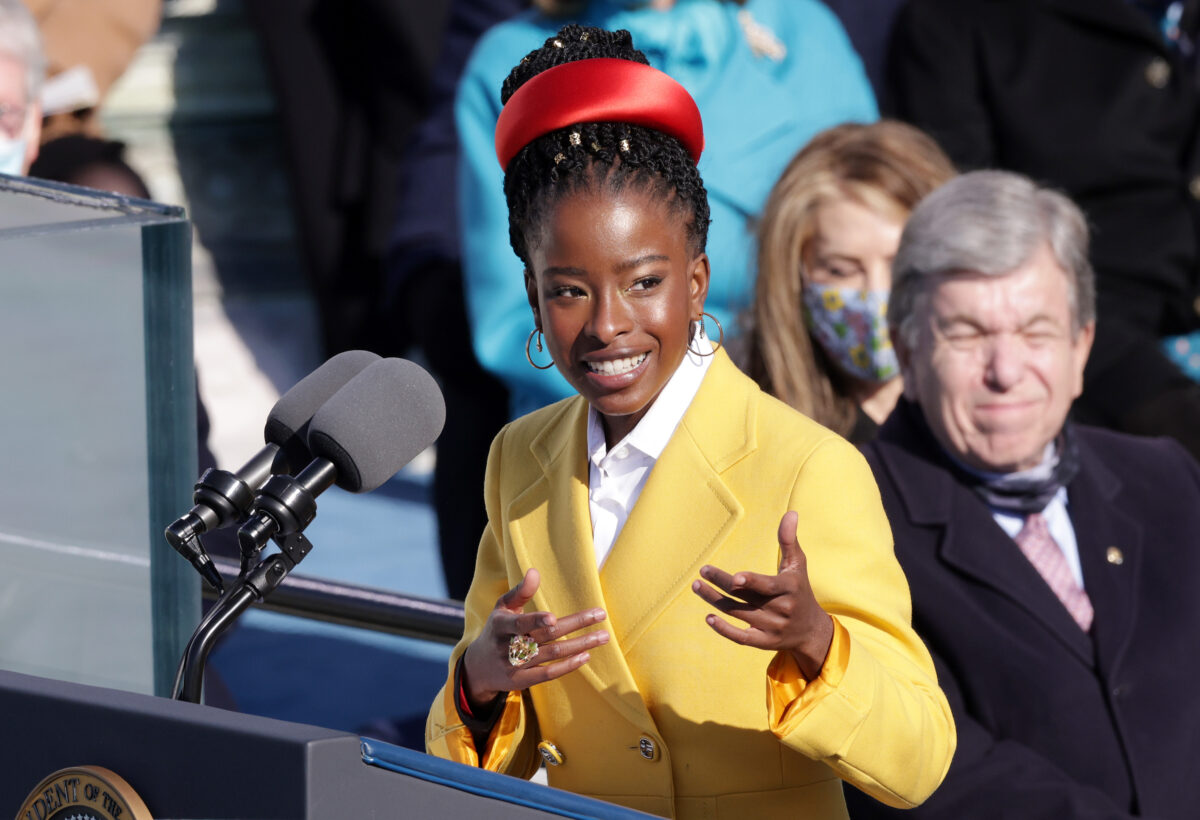 There were many incredible and moving moments during the inauguration of Joe Biden that left me weeping. I cried seeing Eugene Goodman escort Kamala Harris to the dais. I cried when firefighter Andrea Hall recited the pledge of allegiance using ASL. I cried at an openly bisexual woman and a Latina woman singing on the steps of the capitol. I cried seeing the first woman sworn in as VP and a man who cares about people sworn in as President.

But the moment that moved me most and captivated the nation was when 22-year-old Amanda Gorman took the podium as the first-ever Youth Poet Laureate and the youngest poet to speak at the inauguration in history. Gorman recited a poem that truly captured the power of this moment and the promise of America.

Gorman’s poem “The Hill We Climb” was vivid, incisive, powerful, and moving, and with influences from Hamilton to scripture, she spoke to the nation as only poetry can. If somehow you missed it, take a listen, or just join me in basking in the beauty and inspiration once again.

“When day comes we ask ourselves where can we find light in this never-ending shade?” Gorman began, asking the question that troubles us all at this moment. How do we come back from this? But somehow we do, and we will. “Somehow we’ve weathered and witnessed a nation that isn’t broken, but simply unfinished.”

In Gorman’s words, there wasn’t just hope, there was promise. The promise of the very presence of Amanda Gorman on that stage represented. “We, the successors of a country and a time where a skinny black girl descended from slaves and raised by a single mother can dream of becoming president only to find herself reciting for one,” Gorman said. Gorman stated the message of unity of the day better than anyone else on that stage because she represents the people unity should serve. “And so we lift our gazes not to what stands between us, but what stands before us.”

Just two weeks ago, we saw white supremacists and insurrectionists storming the US Capitol. People fueled by hate and lies desecrated the halls of democracy, literally attempting to tear down the peaceful transfer of power. But today, Amanda Gorman stood on the same spot and spoke to the entire nation with poise and passion. What happened two weeks ago at the Capitol represented the worst of America, but Amanda Gorman reminded us of the best. “That is the promise to glade, the hill we climb if only we dare. It’s because being American is more than a pride we inherit. It’s the past we step into and how we repair it.”

With references to Hamilton (which Lin Manuel Miranda caught) and Clinton Inaugural poet Maya Angelou, and taking inspiration from speakers like Martin Luther King Jr. and Winston Churchill, Amanda Gorman built on the past as she looked to and stood for the future, and it was beautiful. “But while democracy can be periodically delayed, it can never be permanently defeated. In this truth, in this faith we trust for while we have our eyes on the future, history has its eyes on us.”

Gorman wasn’t just inspiring, she was simply amazing and captivating, and she won the day for all those watching. She also shares something in common with the President she was honoring. Like Biden, who has a stutter, she too had a speech impediment as a child. And poetry helped her live and grow with it. “Having an arena in which I could express my thoughts freely was just so liberating that I fell head over heels, you know, when I was barely a toddler,” she told NPR. Now she’s the Inauguration Poet and a published author whose book you should buy.

And that’s what poetry and powerful words can do: lift us up, bring us together, and give us something to hang onto and believe in. I know I’ll be hanging onto Amanda Gorman’s words for a long time.