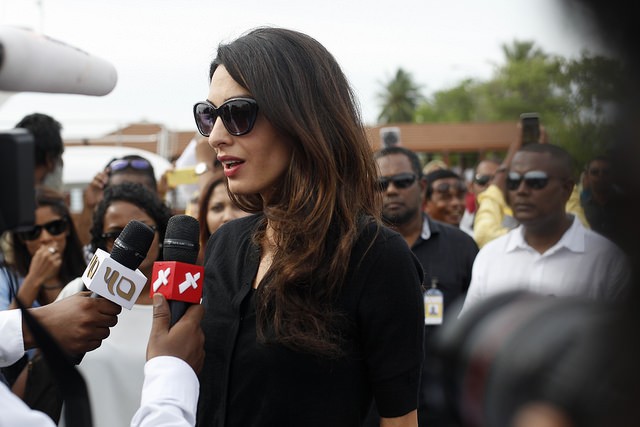 Before Amal Clooney was Amal Clooney she was Amal Alamuddin. She went to NYU’s School of Law, during which time she clerked at the International Court of Justice. Early in her career, she represented Enron and Arthur Andersen. She’s worked for the UN and was a special advisor to Kofi Annan. And this was before she was married to one of the world’s biggest movie stars. But apparently, a high-profile international legal career isn’t enough cred for Justice Minister Edward Faulks QC.

In a recent interview with the Daily Mail, Faulks said:

I’m sure she gets such high-profile cases and everyone wants her because she’s married to George Clooney; and by employing her they’ll give publicity to their case. I mean, look at Cherie Blair: being married to Tony Blair didn’t do her career any harm. I heard her speak after the court case defending the journalists who were convicted in Egypt and, if I’d have closed my eyes, I’d have never placed her because she has this new-age media trendy accent. I can tell you, they weren’t like that when I was a barrister.

Professional? Competent? Female? They weren’t like that when you were a barrister?

Even worse, the Daily Mail piece itself begins this way:

Wearing a £925 red Dolce & Gabbana dress and huge sunglasses, Amal Clooney looked as though she was on her way to a premiere rather than a prison when she met her client, jailed former Maldives leader Mohamed Nasheed, on a working trip to the Maldives last week.

So it’s no wonder that the 37-year-old human rights barrister has raised eyebrows among the great and good of the law, including the Justice Minister, Edward Faulks QC.

Oh! It’s no wonder, ey? So, because she’s stylish and uses the bank she makes being a successful international lawyer to buy nice clothes and chooses to not look as schlubby as Faulks, she deserves his stupid comments? I call bullshit.

Then again, the Daily Mail is basically a glorified tabloid, so let’s take whatever they write with a grain of salt.

Point being, professional men need to be made to be less comfortable making snide, sexist comments about female colleagues, and “news outlets” need to stop using not-even-coded sexist language when discussing women.