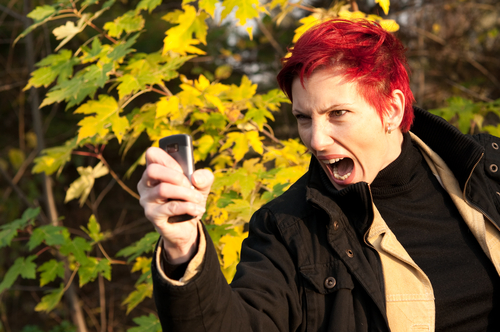 This study from Binghamton University about punctuation in text messages has been making the rounds, and to be honest, it totally resonates. The study revealed that most people who receive a text with a period placed at the end view said text as less sincere.

The example question/response used by the study was purely intended to be a short, quick communication. Celia Klin, who led the study, had participants examine a set of text exchanges that consisted of a call and response. The call, or question, was: “Dave gave me his extra tickets. Wanna come?” The response was any one word affirmative: okay, yep, sure, or yeah. From there on out, the study continued thus:

There were two versions of each experimental exchange: one in which the receiver’s response ended with a period and one in which it did not end with any punctuation.

The study addresses some shortcomings that plague texting and internet communications, specifically intent, tone, and feeling. It’s difficult to inject emotion into a simple response text without going overboard with exclamation points and commas. Using extra language beyond the affirmative can also be seen as defeating the purpose of texting, which is ostensibly supposed to be for short, quick communications–as used in the example in the study.

Klin spelled out the findings thusly:

Texting is lacking many of the social cues used in actual face-to-face conversations. When speaking, people easily convey social and emotional information with eye gaze, facial expressions, tone of voice, pauses, and so on.

People obviously can’t use these mechanisms when they are texting. Thus, it makes sense that texters rely on what they have available to them–emoticons, deliberate misspellings that mimic speech sounds and, according to our data, punctuation.

Go ahead and take a look at the texts on your phone. Think about how often you use periods. Sure, there are plenty of people whose adherence to proper grammar won’t allow them to use anything but periods at the end of their sentence. However, to a lot of people–especially those of the study’s undergrad age group–that period may end up with your buddy misunderstanding your point. Unless they really knew you and how you type, that could very well be a real problem.

Ben Crair over at The New Republic touched on this phenomenon back in 2013, when (to a lot of us, I suppose) it was still just a feeling we all had. He quoted Choire Sicha, editor of The Awl, who said, “The unpunctuated, un-ended sentence is incredibly addicting. I feel liberated to make statements without that emphasis, and like I’m continuing the conversation, even when I’m definitely not.”

This can perhaps explain the loaded feelings behind the period. When it’s added to a sentence, it often lends a sense of finality to the message. Sometimes it feels like the addition of a period suggests that this is it, there’s a firm meaning behind this, and it’s not open to your interpretation. This may perhaps say more about me than evolving linguistics, but given that most of the time I assume people are unhappy with me, it thus gives the message that very same tone and eliminates any chance of me interpreting it otherwise.

At the risk of repeating myself: communication on the internet is difficult. Anybody can tell you that. It’s nothing short of absolutely intriguing that it feels like we’re trending towards the elimination of punctuation in messaging. While I don’t think that we’ll completely eliminate it, it’s fascinating to observe.

If anything, this study has made me take a good, hard look at the way I communicate with people on the internet. It’s something I’ve thought a lot about before, but having a study to back up my feelings kind of validates those daydreamy hours.

Tell us: have you ever felt that a text with a period at the end of it was disingenuous? Do you think you’ll change the way you text because of this study?

(via Jezebel, image via Shutterstock/microcosmos)