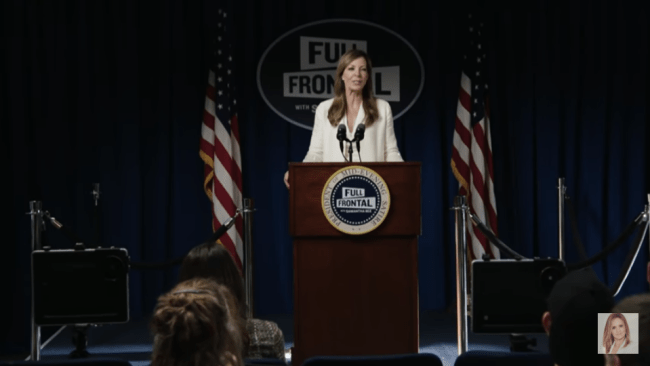 While Hasan Minhaj was hosting the official White House Correspondents’ Dinner, Samantha Bee held her own free-press event last night: the Not the White House Correspondents’ Dinner. Bee’s special raised more than $200,000 for the Committee to Protect Journalists (CPJ), with a series of star-studded sketches that included appearances from George Takei, Will Ferrell, Cameron Esposito – and Allison Janney.

At the end of the segment, Janney snaps. “You know that? You people are monsters,” she says. “Yes, we have freedom of speech, and of the press, in this country, and that is a beautiful thing. So if a morally bankrupt gang of racist bloggers, anarchists, radio hosts and rancid woman-haters want to call themselves journalists, no one can stop you. But you are part of the reason that no one trusts the real press.”

“These journalists work day and night to find the truth, write it down, or tell it to a camera. And sometimes they fuck it up. But when they do, they apologize. (Most of the time.) They chase down stories, even when the stories put them in danger, and their phone batteries die because of all the Pepes tweeting abuse at them. And you pretend to be them, ruining their reputation – at least among people too stupid to tell the difference. You are the dregs of a free society. We have to let you exist, but we do not have to listen to you.”

Bee also laid into Fox News and its parent company for their far-too-little, far-too-late response to the decades of sexual harassment suits brought against Bill O’Reilly and Roger Ailes. After a faux “In Memoriam” for Ailes and O’Reilly, two men who were “Gone Too Late,” Bee said, “What a triumph for women that career sexual predators are finally getting what they deserve: $65 million and age-appropriate retirement. Oh, justice.”

Lastly, Will Ferrell reprised his Saturday Night Live role as George W. Bush, returning as the “prodigal son” of America. “How do you like me now, huh?” Ferrell asked.

“You guys [in the press] would always sneak up on me,” Ferrell joked in-character, “with ‘Gotcha!’ questions like, ‘Why are we going to war?’ Gotcha! ‘Why did you not respond to Hurricane Katrina?’ Gotcha! ‘What is your middle name?’ Gotcha! I just wish someone had told me that all you have to say is ‘fake news’ over and over again.”

You can watch the other segments from Bee’s Not the White House Correspondents’ Dinner special at the Full Frontal with Samantha Bee YouTube channel.

(Via Slate and; image via)